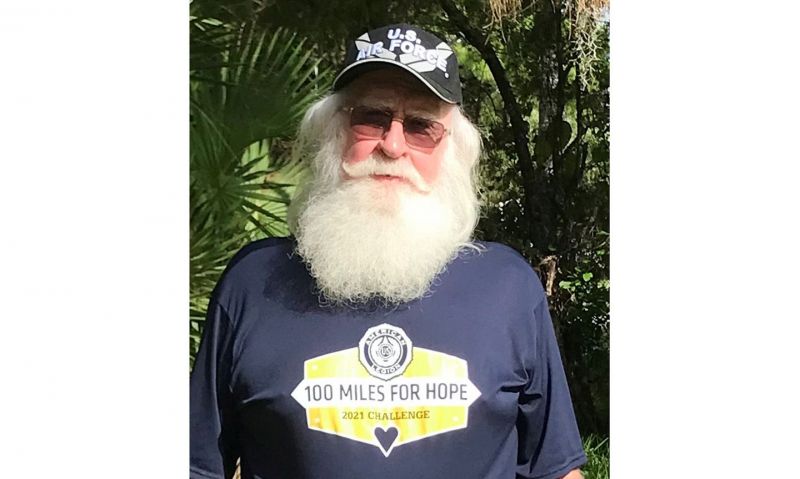 Harry Provan embarked on his 100 Miles for Hope journey with a series of goals, including walking 300 miles, losing 50 pounds and “my most important goal, to help veterans.”

As the second annual American Legion 100 Miles for Hope nears its conclusion on Sept. 6, Provan certainly helped veterans through his fundraising efforts. To date, his donors have contributed $3,770 to The American Legion Veterans & Children Foundation (V&CF). That’s the largest amount raised by an individual, according to the Kilter app that most participants are using to track activities and donations.

“100 Miles for Hope has personally helped me, but it’s been about my goal,” said Provan, whose initial fundraising goal was $200 to $300. “My son surprised the hell out of me when he donated more than $1,500. He said, ‘Dad, you do so much for veterans. I just want to help.’ It was great. I’m just happy to help veterans.”

Provan, a member of American Legion Post 273 in Madeira Beach, Fla., is an Air Force veteran who served from 1957 to 1961. His son, Jake Miller, did not serve but supports his father’s dedication to helping veterans. Provan, 82, helps veterans where he can with Honor Flights, parades and other events.

“I just start a conversation,” he explains as to how he raises money. “I do it with friends and family. They say they will donate and ask me to send a link. People will donate if they are asked.”

All proceeds from 100 Miles for Hope donations, registrations and merchandise purchases at Emblem Sales go directly to the V&CF. The foundation provides Temporary Financial Assistance grants to eligible active-duty servicemembers and American Legion members with minor children in the home, and supports more than 3,000 accredited American Legion service officers who provide free assistance to veterans and their families applying for VA benefits.

Beyond the fundraising, Provan is closing in on his other two goals. He has currently walked 283 miles, on pace to top his goal of 300 miles, even though he missed time related to a knee injury. He also has lost nearly all of the 50 pounds that he set as a goal.

“It’s helped me lose weight for sure, but it’s more about the veterans who need help,” said Provan, who has also done strength training, volunteer work and other activities that count on the Kilter app.

• For participants who signed up after June 15, your medals are being created and will be shipped on or about Sept. 1 to the address you provided.

• For participants who signed up before June 15, you should have already received your medal. If you haven't received it, please email magazine@legion.org with the following information: your full name, mailing address, approximate registration date and whether you signed up via Kilter or Emblem Sales.