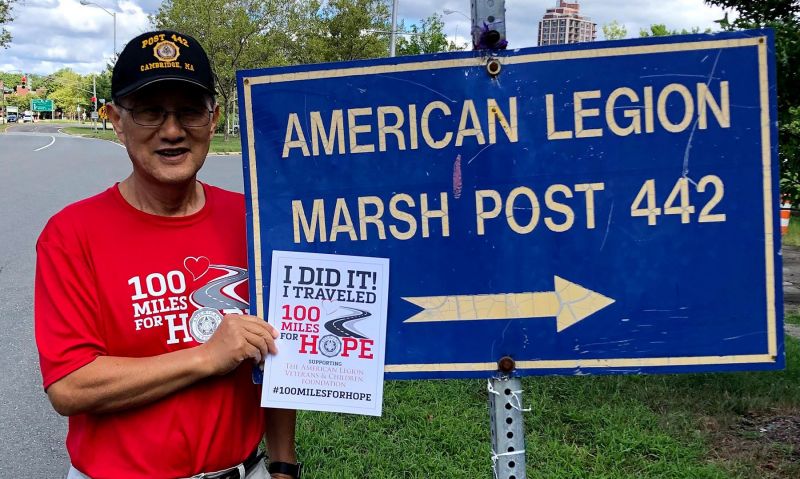 In 2020, Paul Kim – an Army veteran and chaplain for Marsh Post 442 in Cambridge, Mass.– signed up for The American Legion’s first 100 Miles for Hope wellness challenge. Within a month, he’d walked that distance and more, so Kim decided to keep going … and going.

“A chaplain’s role in the military is to build morale,” he says. “I want to encourage other veterans. We can do it. You can do it. That is why I keep walking.”

Kim, 74, intends to log 3,000 miles by the summer of 2023. In his mind, he’s on a cross-country trek from Boston to Seattle, where his brother and two sisters live. Every time he hits a milestone, Kim posts about his progress on the Legiontown platform, where participants can share their 100 Miles for Hope stories.

Kim walks a minimum of four to five miles a day: toward Harvard on Mondays, around the Danehy City Park track and field area on Tuesdays and Wednesdays, to the War Memorial at Belmont High School on Thursdays, to his in-laws’ graves at Mount Auburn Cemetery on Fridays, and to his American Legion post on Saturdays.

With Easter approaching, he draws a parallel between his daily walks around the city and his daily walk with God, or “pilgrim journey.” Both require discipline, determination and, above all, faith.

“If you do not have faith, you cannot reach the hope,” he says.

Kim and his wife, Rebekah, founded Berkland Baptist Church (BBC) in Berkeley, Calif., in 1981. A decade later, they started a second church, BBC-Boston, now known as Antioch Baptist. As pastor emeritus, Kim is thankful for the couple’s 41 years of ministry, during which they’ve mentored college students, young professionals and hundreds of others in their Christian faith.

He’s recruited members of his congregation to support and even join him in the 100 Miles for Hope challenge, to not only strengthen their spiritual health but their physical health, too. He can testify to the latter’s importance, having survived a heart attack 28 years ago.

Kim had just finished a swim at the Cambridge YMCA when he felt an acute pain in his chest. He thought it was a stomachache, but when he drove home and Rebekah found him too weak to move, she took him to a clinic. He was in the hospital for 12 days, while friends and family prayed for a miracle.

“It is by the grace of God that I am alive today and able to continue to do His work,” he says.

Told by his doctor that he wouldn’t survive a second heart attack, Kim underwent quadruple bypass surgery in 1997. Once recovered, he organized a bicycling club with members of his church, riding two hours on Saturday mornings. He also made a habit of walking in his neighborhood.

The Legion’s 100 Miles for Hope challenge, however, has renewed Kim’s enthusiasm for personal fitness – and created opportunities to share the faith that has shaped his life.

“My message to veterans is not just that I’m walking, but that I want to walk by faith,” he says. “I want to encourage other people. Some veterans are young, and some are very old, and I want them to have a hope in Christ for eternal life.”

Born in Taegu, Korea, in 1948, Kim grew up wanting to be like the American soldiers who came to help fight for his country. “They sacrificed their lives, almost 36,000 killed and missing in action,”  he says. “I wanted to pay my dues, to serve.”

His family immigrated to Hilo, Hawaii, in 1967, and Kim enlisted in the Army. He trained at Fort Ord, Calif., was stationed at Fort Lewis, Wash., and became a U.S. citizen while in uniform. Following his discharge in 1969, he went to college on the GI Bill, then studied at Southwestern Baptist Theological Seminary in Fort Worth, Texas.

Kim returned to military service in 1986, serving 10 years as a commissioned officer and chaplain in the Army Reserve. And for 25 years, Rebekah has worked as a Southern Baptist chaplain at Harvard. Their love for such work has only grown, with Kim taking on the role of national chaplain for the Korean War Veterans Association.

When the VA hospital wait-time scandal broke in 2014, Kim asked a friend – retired Col. Sam Birky, a former Navy SEAL and Army Reserve chaplain – where he could get involved helping veterans. Birky pointed Kim to The American Legion, and he’s been a paid-up-for-life member since.

Every Saturday, Kim is at Marsh Post 442,  a mile and a half from his home. He relishes his role as chaplain, opening and closing meetings with prayer, and listening and talking to members. He encourages and sometimes prays with them.

Kim also wants to set an example, and plans to keep walking even after hitting his goal of 3,000 miles. On his list of potential destinations are Massachusetts sites significant to the nation’s religious history. Among them are Northampton, where Jonathan Edwards’ preaching sparked a religious revival that led to the First Great Awakening, as well as a monument at the site of the 1806 Haystack Prayer Meeting in Williamstown, which launched the modern missions movement.

“I want to continue as long as I am able,” Kim says.