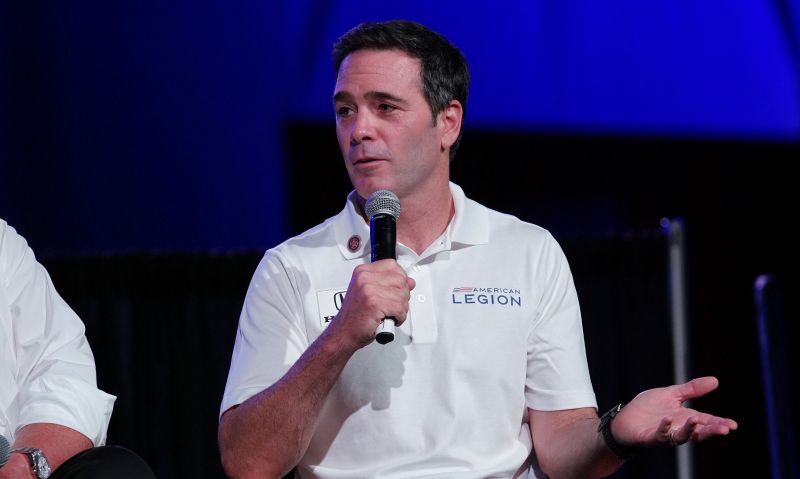 This is the second year that Jimmie Johnson, Tony Kanaan and Alex Palou are representing The American Legion during the INDYCAR race season. The drivers are doing more for The American Legion this racing season than just wearing the gear and steering the sponsored cars.

They are playing pivotal roles in educating the public about The American Legion’s Be The One initiative to reduce the numbers of veteran suicides. Additionally, they are participating in the Legion’s third annual 100 Miles for Hope fitness and wellness challenge.

Prior to the season, each driver gave exclusive interviews to The American Legion. Here are excerpts from the Q&A with Johnson, edited for brevity and clarity.

Question: Entering your second year representing The American Legion, how has it inspired you to be driving for and cheered on by veterans who dedicated their life to serving America?

Johnson: I was very fortunate to get this opportunity from Chip Ganassi. It’s been a lot of fun and a huge learning experience. This was the original dream as a kid — to race at the Indianapolis 500. To be 46, and getting a second crack at my dream, I am very thankful to have this opportunity.

Johnson: My grandfathers were these strong, stoic men. There was just a feeling, as a kid looking up to them, that they went to war for our country and they were heroes to me. Their work ethic, discipline, their moral compass to see what they were made of and then to see that work its way into my parents and in to myself was neat to see and something I reflect back on. They were superheroes.”

Question: Generations of veterans have returned from war to face challenges related to transitioning back to civilian life. Sadly, roughly 20 veterans a day take their own lives. Tell me about what it means to you to be supporting The American Legion's commitment to reducing the rate of veteran suicide.

Johnson: The world is more aware of depression and mental health in general. Then you think of men and women who are serving our country and the environment and situations they might find themselves in in combat. It’s easy to understand why we have a problem. To know that The American Legion is working hard to make that known using myself and INDYCAR to help spread that word, I’m honored that we get to help. I feel like the motor sports fanbase is a fanbase that is very patriotic. At every race, we have the national anthem, flyovers. I’ve seen fans thank servicemembers at tracks. To take this to the next level, I’m excited to see the fanbase react.

Johnson: I’m in that race mode and it’s always impressive to me how quiet it becomes when the national anthem is sung. It’s beautiful and spectacular.

Johnson recalled that In March, he was attending a soccer game in Charlotte, N.C., when the mic malfunctioned during the singer’s rendition. “There were 75,000 people in the stands who picked up when the mic dropped out. To hear 75,000 people sing the national anthem … I’m getting goose bumps just thinking about it. It was such an amazing moment. It was a gesture of thankfulness, pride and honor. It was so awesome.”

Johnson: I’m inspired to hear about 100 Miles for Hope. Being active with the physical benefits I receive are nice. But the thing that surprised me is the mental aspect that I have received from trying to stay fit.

As a NASCAR driver, he focused on cycling mostly for cardio and did some strength training. Now he focuses more on interval training, running and rowing, and building upper body strength since the cars he now drives don’t have power steering.

“Fitness is part of the INDYCAR culture. But it’s more than that, it’s a requirement because driving the cars is such a physical task. You don’t have a choice. I’m inspired to hear about the 100 Miles for Hope. For me being active, with the physical benefits I receive are nice. But the thing that surprised me is the mental aspect that I have received from trying to stay fit.”

Question: How do you motivate yourself to do a workout when your mind is telling you to blow it off?

Johnson: Sometimes, the hard part is actually starting, lacing up your sneakers or getting into workout gear. But once you do that, the thing waiting on the other side of that workout is the mental clarity and the mental benefit you get from it. Hopefully those who are less active can get more active and grasp the mental clarity that comes with exercise.

Question: What would you recommend to others who have trouble finding or staying motivated to work out?

Johnson: Every couple of years I need to change up and find a way to stay motivated. There are ways to do that. Setting a personal goal that is real and achievable is one. Preparing for an event, maybe a 5K or run-walk, or for someone who is in shape, maybe a half marathon or longer. Having a friend group that goes. I’ve been very inspired by my group of friends who cycle. It helps on days when I am feeling lazy and I get a text, ‘Hey, come join us.’ There are also groups for runners and cyclists that offer a layer of accountability. It’s not just one silver bullet.