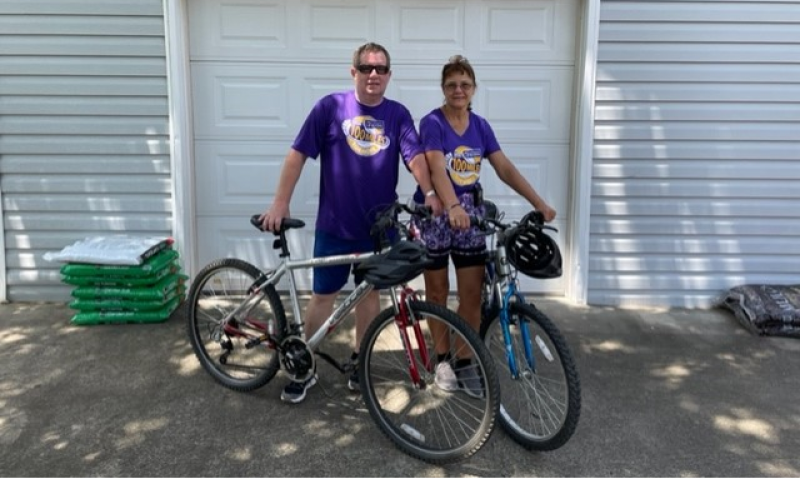 Kim and Tim Gardner of Hope Mills, N.C., were looking for a life change. After decades of raising sons and growing careers, they shifted their focus to health.

Kim’s focus was to help manage her Type 1 diabetes, and Tim, a retired Army veteran, was focused on weight related to his medical issues.

“We’ve always known we need to be healthier, but it wasn’t until our children were grown and out of the house, and I actually retired from my job several years ago, I didn’t have an excuse anymore not to be,” Kim said.

This summer, the Gardners are putting their miles to use through 100 Miles for Hope, a fitness/wellness event in which participants log 100 miles by Labor Day as they fundraise for The American Legion Veterans & Children Foundation (V&CF). All proceeds from registrations and donations go directly to supporting disabled veterans and military families. (Learn more and register for the third annual challenge here.)

They set an ambitious goal. Instead of 100 miles for the summer, they’d each log 100 miles a month for June, July and August.

They’ve exceeded it each month with over 400 miles in June and July each, and over 125 miles each so far in August.

Now, they get their miles together. But when they returned to prioritizing fitness after years of being stagnant, they weren’t teaming up.

They did both start small: Kim started exercising with a friend who also has diabetes. Now they both have an accountability partner, and go on walks for several miles while talking on a nearby trail. Tim, with bad knees from his time in the Army, preferred the stationary bike, which he’d ride for about 30 minutes.

Over time, Kim has built up her walks to 7 miles a trip.

When Tim retired from his second career, his open schedule let him improve his biking regimen from four times a week to every day. He also built up to an hour a day on the bike.

While Kim was glad to see changes in Tim’s health — he’d lessened his medications, for one — she didn’t understand the appeal of biking in place.

“I was always kind of like, ‘It doesn’t go anywhere, you don’t see anything. It’s not outside,’” Kim said.

Then Covid-19 hit. Kim said the trails became too crowded. Stuck inside, they moved a TV into the garage and Kim joined him.

Now they bike together for an hour a day most every morning, averaging 15 to 20 miles a ride. The ritual has not only boosted their health, it’s also boosted their relationship.

“Raising kids, you kind of drift apart because you’re so focused on the kids. [Now] We’re riding side by side, so we’re talking more. We used to have some of the best conversations in the car on trips. And that’s kind of on the bike now,” Kim said.

It’s also affected their family life. Now, they can go with their adult sons and their girlfriends on mountain biking adventures or hike with extended family.

“Do something. It makes a big difference,” Tim said, noting that vacations now center around an activity, such as hiking. “It’s opened up some things and, and again, we both feel healthier, a lot healthier.”

“People say that and you think, ‘Oh, yeah, yeah.’ But it really is true, you feel better. And when you feel better, you want to be more active,” Kim said.