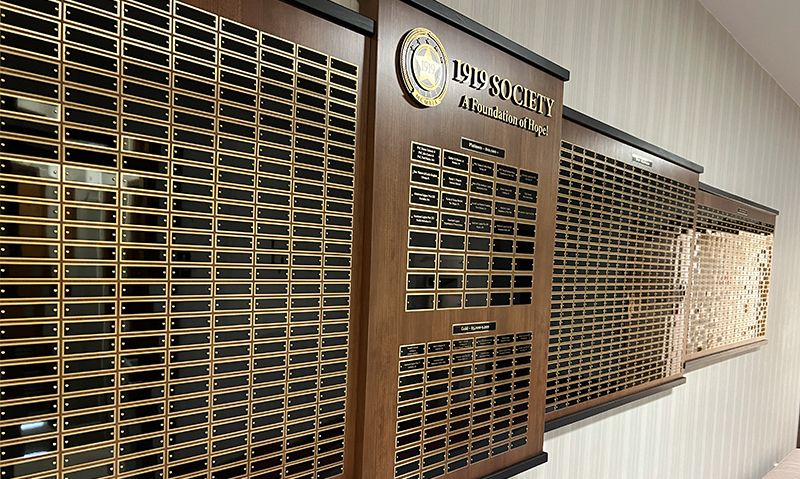 The 1919 Society is a network of donors who believe in The American Legion’s sacred commitment to veterans, military service, young people, good citizenship and patriotic values. A financial contribution to the American Legion Veterans & Children Foundation, which helps veterans get the benefits and care they need as well as children whose veteran/military families have fallen on tough times, is required for membership.

Within its ranks are business leaders, entertainers, educators, health-care providers, athletes, authors and other proud Americans whose lives have been positively influenced by The American Legion’s inspiring programs, services and values. The society also consists of some groups and associations that have chosen to invest in the future on behalf of someone they wish to honor. Foremost, it is a society that believes in the value of “Veterans Strengthening America” through the nation’s largest veterans service organization.

Members of the society generously pay it forward so new generations will have the same opportunities they were given by veterans of the U.S. Armed Forces, from youth programs that instill responsible citizenship to free assistance on VA disability clams.

All 1919 Society investments are tax-deductible, and members are offered specific forms of recognition based on level of commitment.

Return the form with your check or credit card information to:

The names of those who achieve the highest level in The American Legion 1919 Society are engraved in the center area of the society’s permanent wall of honor in the executive leadership wing of National Headquarters in Indianapolis.

Gold Level Members of the 1919 Society receive a gold medal with ribbon necklet honoring their commitment to the organization and its timeless values. Gold Level members also receive:

At the Silver Level, a 1919 Society member receives a three-ruby lapel pin and their name engraved on the outer flanks of the Wall of Honor in American Legion National Headquarters in Indianapolis. Silver Level members are also recognized at the National Commander’s Banquet during the National Convention.

Engraved in gold letters on polished black brass are the names of those who have made a commitment to the future by joining The American Legion 1919 Society. The multi-dimensional wall, of beautiful dark cherry is prominently displayed outside the executive offices of American Legion National Headquarters in Indianapolis.