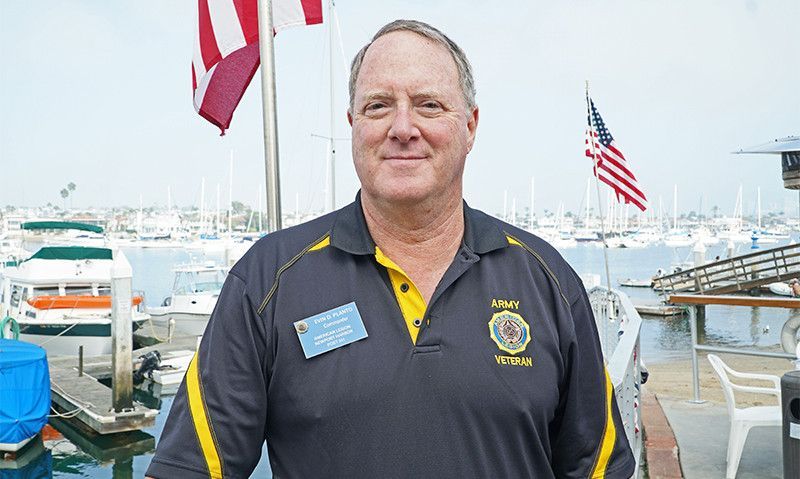 American Legion Post 291 Commander Evin Planto understands what it’s like to be a new member, having joined the organization less than a year ago. Photo by Jeff Stoffer/The American Legion

Evin Planto’s journey from first-time member to commander of The American Legion’s second largest post took seven months. Urged by his Legionnaire wife Lynette – who he describes as “the social one” – the retired U.S. Army Reserve colonel joined Newport Harbor Post 291 in January 2021, his first time as a member of the organization. In March, he was nominated to run for post commander. Elected in May, he took office in July.

“I figured, what the heck?” he said. “I did 30 years in the Army, had battalion command, I was in the Pentagon, was on the Army staff, served in Iraq for a year … then I had a business for 15 years. So, I figured, I could probably do this.”

Now Planto’s mission is to apply decades of military and business leadership to advance the southern California post’s image and value, emphatically to interest younger veterans and those still in uniform.

“The average age here is 71,” Planto explains. “And we have a lot of people going to Post Everlasting – throughout the whole American Legion – and that’s a big issue.”

Planto’s experience so far has shown him that young veterans and active-duty personnel are open to American Legion involvement – if they know what it is. An outreach effort last summer to connect next-generation members in Orange County to Post 291 attracted nearly 100 new faces and their families for the post’s annual July 4 boat parade. “They really had a good time,” Planto says. “We took them out, and they loved it. The thing is, they didn’t know what The American Legion was.”

A proponent of the national “Access Granted” initiative that invited local posts onto military installations where The American Legion could offer information about VA benefits, civilian career opportunities and other transition-based interests, Planto sees nothing but opportunity when the organization engages those on one side or the other of a DD-214 that hasn’t withered with age.

Last summer, for instance, the U.S. Naval Academy women’s volleyball team rented one of Post 291’s rooms for a dinner as they were training nearby “and it just so happened to be a Friday night, when we do our dinner and dance,” Planto said. They had no clue what The American Legion was, but they really loved talking to the Navy veterans who served in Vietnam.” The players joined in the post flag parade that night and snapped to attention during the playing of the national anthem.

As much as the busy post can – with an American Legion Family membership of more than 7,100, counting American Legion Auxiliary and Sons of The American Legion – it is making deliberate steps to improve the entire member experience, regardless of age. “My daughter is 28,” Planto says. “And I ask myself, would she ever want to come in here?”

Soon after he retired from the Army in 2010, Evin and Lynette Planto visited a few American Legion posts in other places, but they weren’t drawn to them. They later moved to coastal southern California to be closer to family and discovered Post 291. “When we saw this, we said, ‘Hey, this is great. Let’s give it a try.’”

A former ROTC computer science grad and certified information security professional, Planto left active duty in 1985 but stayed on as a Reserve before he was called up to the Pentagon in 2003 for communications planning with some of America’s highest-ranking wartime leaders. He deployed to Iraq the following year, where he served as communications director, International Zone, Baghdad, and led massive battlefield communications infrastructure operations that put him on IED-infested roads under drone-patrolled skies around the dawn of the second battle of Fallujah. “It was very interesting,” he says of his time in theater. “We were getting mortared, and rockets and all that fun stuff, and when things would break, it’s not like you could just go down to Radio Shack and buy more parts.”

More recently and less dangerously, he has immersed himself in American Legion history and the national online Basic Training program for a clearer understanding of the organization. With no aspirations for district or department offices, Planto says he is learning all he can, with help from mentors and an open-minded executive board, just to do his best for the post he joined 11 months ago. “The best job in the Army is company commander,” he says. “And this is my company.”

Post 291 has been one of the nation’s top competitors at the national convention color guard contest in recent years. And 2021 American Legion Boys Nation President Ryan Jung began his journey through California American Legion Boys State after sponsorship from Post 291. Post Service Officer Cory Vigil was named Veteran of the Year in 2021 for the legislative district that includes Newport Harbor, thanks to his tireless work to help veterans and military-connected families in transition. “Our service officer … is incredible,” Planto says. “I am blessed here. He is really something.” The post also manages an emergency assistance fund for veterans in need and actually increased membership by staying open for take-out orders during the worst of the COVID-19 pandemic. The post website is dynamic, and e-newsletters go out weekly to announce various activities, from Veterans Coffee Talk Saturdays to American Legion Baseball fundraisers, honor guard opportunities, Taco Tuesdays and Jazz Night performers.

With less than a year of membership under his belt, the Post 291 commander has yet to personally experience all the programs, services and activities of the Legion, but every day, he pushes to make the experience more appealing to new recruits as well as regulars.

Initiatives might be as simple as adding heaters for foggy coastal evenings on the patio or the replacement of outdated drop ceilings in the banquet hall. Facility improvements and some preventive maintenance, Planto says, will help the popular post celebrate its centennial in two and a half years. “When I ran, I ran on improving the member experience,” he says. “We are working on all of that and making lots of progress.”

Ultimately, his goal is to “keep it interesting, give members a place to come and have fun” and newly introduce eligible members to an organization that’s over a century old.

A new member himself, Planto understands both the challenge and the opportunity. “It’s difficult to reach out and find these people and get them to know who you are, and then get them to join,” he says. “I am thinking we can change that paradigm to, instead of us looking for the vets, have the vets come looking for us… so that when they leave the service, they will seek out The American Legion.”