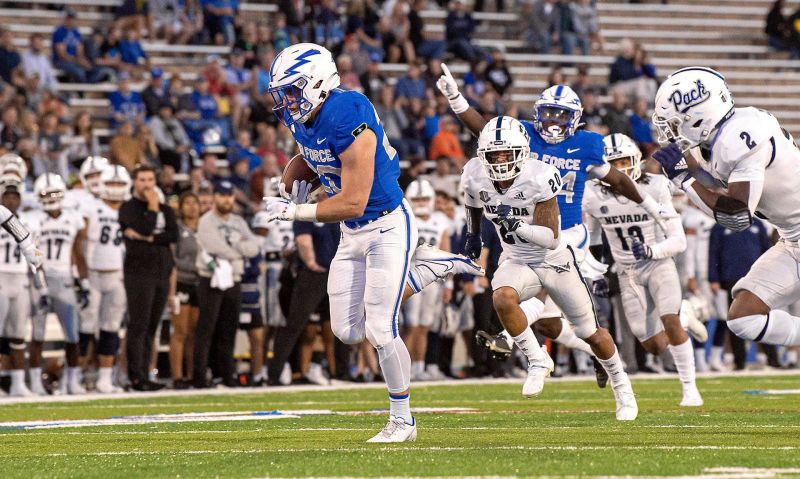 Football is more than a game to those who attend the nation’s military academies. It is the embodiment of the values, work and commitment that is the foundation of academy training and life. And there are three games that matter most. This trio of contests forms the basis of the struggle for the Commander-In-Chief’s Trophy.

Established in 1972, this round-robin competition between the squads from Air Force, Army and Navy starts its 51st season on Saturday when Navy travels to Colorado Springs to take on Air Force (12 PM EDT kickoff, CBS network nationwide).

For the three academy teams, the object is simple and direct – beat your two opponents. Do that and you get your institution’s name and year engraved on the three-sided silver trophy that stands 2.5-feet tall and weighs 170 pounds. Winning the trophy outright also earns an academy the honor of possessing and displaying the award for the next year, and the team also usually gets an invitation to visit the White House and meet the president. If no team scores two victories, the trophy is retained by the last team to win it (and there is no White House visit).

Air Force has won the trophy 20 times followed by Navy (16) and Army (nine). It has been shared five times, including last year.

The 2022 Navy-Air Force game appears to be a physics problem: what happens when an unstoppable force (Air Force’s nation-leading running game which is averaging a whopping 412.3 yards per game thru four games) meets an immovable object (Navy’s fourth-ranked run defense which is allowing a stingy average of 96.0 yards per game thru three games)?

The Falcons (3-1) lead the all-time series 32-22, including a 23-3 win last year at Annapolis. This year, they have a powerful offense that has scored at least 41 points in the three victories while the 17-14 loss at Wyoming was at least partially the result of five key players sitting with injuries while 50 players saw game action despite dealing with the flu. Rarely have the hosts finished a drive without scoring.

The dominating running attack is led by a pair of seniors – fullback Brad Roberts and quarterback Haaziq Daniels. Roberts has started the last 20 games for Air Force and this year he ranks ninth in the nation with a rushing average of 116.2 per game and has 12 career games of 100 yards rushing – just two games short of tying the all-time air Force record. He scored three touchdowns against both Nevada and Colorado.

Daniels is averaging only 44.8 yards per game, but his masterful direction and execution of the triple-option offense has kept opposing offenses off balance. Daniels doesn’t get to throw the ball often – completing 11 of 27 attempts for 2018 yards and 3 TDs – but this year his passes have been particularly effective; his average of 24.8 yards per completion is ranked third in the country. That threat of the big-yardage completion has kept opponents honest about covering the Air Force air attack and opened up the running game.

Navy (1-2) stumbled out of the blocks with losses to Memphis and Delaware, but bounced back with an emotional 23-20 double-overtime victory over East Carolina. Senior kicker Daniel Davies was the feel good story of the win. The third string kicker who usually was the holder on PATs and field goals, Davies found out just two days before the game that injuries to others meant he would be kicking against East Carolina. Davies had never attempted to split the uprights for Navy, but he drilled two PATs and field goals of 37, 43 and 29 yards to seal the Navy win.

The Midshipmen are in a rebuilding mode, with just four seniors are at the top of the depth charts for the 22 positions. Leading the way are junior quarterback Tai Lavatai and sophomore running backs Maquel Haywood, Anton Hall and Daba Fofana. Lavatai has settled into the triple option offense and has demonstrated his individual nimbleness and durability (51 rushes for 101 net yards), along with a solid arm, completing 15-30 passes for 386 yards and two touchdowns. Haywood is a triple-purpose threat, logging 149 rushing yards, 77 receiving yards and 115 kickoff return yards. The East Carolina game saw the emergence of Hall, who had career highs in carries (22) and yards gained (57). Another new face, Fofana, ran for 47 yards against Delaware and 44 against East Carolina.

While the offense is still improving, the defense challenges against all comers. Senior striker and captain John Marshall leads by example, averaging 9.3 tackles per game (27th in the nation). He also has 3.5 tackles for loss, two sacks, two QB hurries and one pass break up. He made a career-high 15 tackles in Navy’s loss to Memphis; it was the most by any Navy defender since 2013.

Navy ranks 10th in the nation with 10 quarterback sacks this season after recording just 16 in 12 games last year. Junior defensive end Jacob Busic leads the team with three sacks, followed by Marshall with two and eight others with at least a half a sack this season. Sophomore linebacker Tyler Fletcher recorded his first career interception in Navy’s win over East Carolina. The stout defense has helped Navy to an average time of possession of 33:58 per game, which is 10th best nationally.

Beyond the statistics of the sport, the Commander-in-Chief’s trophy games mean far more than the final score.

“This game is everything,” said Ken Niumatalolo, now in his 15th season as Navy head coach. “As long as I have been here, getting that trophy has meant everything. Being at Navy, all the talk is about (beating) Army, which I get. But for us, beating Air Force is the first leg of it. You can’t get the Commander-in-Chief’s trophy unless you beat Air Force. As far as being at the Naval Academy, this game means everything.”

In Colorado Springs, a question about the game’s significance brought a lump to the throat of the Falcons head coach.

“It is (a reminder) about sacrifice,” said Troy Calhoun, now in his 16th season as head coach at Air Force. “The dedication and commitment of the cadets and the midshipmen to our country, to go serve. There’s just so much respect involved.

“Golly, if you’re 17 or 18 years old and, I won’t say you have the pick of the lot as to where you want to go to college, and you say I’m going to raise my right hand and I’m going to take an oath to go fight for our constitution…I can tell you what it does to my heart – it gets a little bigger. I think that’s pretty darn cool.”