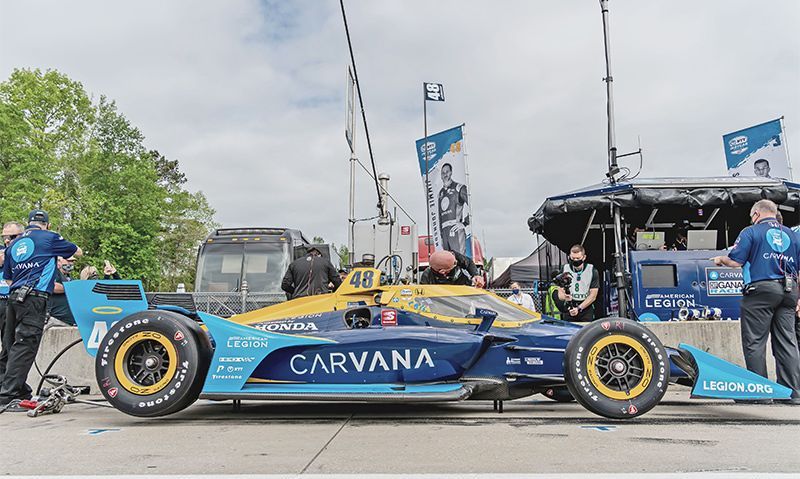 One week after safely finishing his debut, Jimmie Johnson will head to Florida to compete in the next race of the 2021 NTT INDYCAR Series. Racing in the Chip Ganassi Racing (CGR) No. 48 Honda, Johnson skillfully avoided a wreck on the opening lap and finished up 19th in the Honda Indy Grand Prix of Alabama at Barber Motorsports Park in Birmingham.

Next up for Johnson in a car featuring American Legion branding prominently in its paint scheme is this weekend’s Firestone Grand Prix of St. Petersburg, where Johnson and his Ganassi teammates will compete in 100 laps through streets of downtown St. Petersburg and a section of runway of Albert Whitted Airport. The course features 14 turns on the 1.8 mile-circuit.

Chip Ganassi Racing is coming off a spectacular 2021 debut. In addition to Johnson’s finish and extensive media coverage before, during and after the race, teammate Alex Palou picked up his first career NTT INDYCAR SERIES victory. Fellow CGR driver Scott Dixon took third, while Marcus Ericsson was eighth.

The Firestone Grand Prix of St. Petersburg will be broadcast on NBC at noon ET, as well as on the INDYCAR Radio Network and SiriusXM. Debuting during the television broadcast is an American Legion ad in which Johnson talks about the organization’s efforts both nationally and locally, continuing its tradition of “strengthening America through service.”

For a complete schedule of this weekend’s practice and race, click here.

We’ve also made available a printable, downloadable poster/flyer featuring the American Legion-sponsored 48 car and its scheduled appearances in the NTT INDYCAR SERIES for 2021 so fans can keep up with the action and promote the competition in their communities. Click here for more info and here to download the poster.