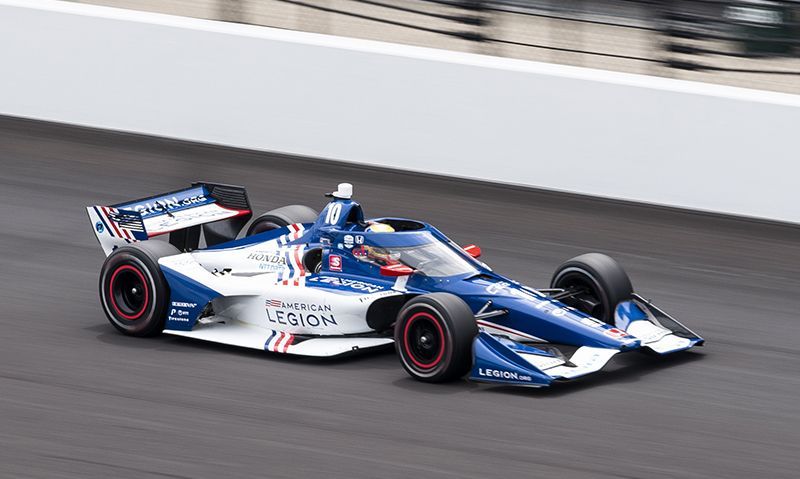 Andrew Bowman has been a member of The American Legion since “way back in the early ‘80s” and served a combined 30 years in the U.S. Army and National Guard before retiring a few years ago. Now he spends part of his time at Indianapolis Motor Speedway (IMS) close to the action, helping guide cars in and out of the pits as the garage/pit lane flagman.

Bowman – a member of American Legion Post 500, located just across the street from IMS – was there May 15 for the GMR Grand Prix. And when not working, he got an opportunity to see something that made him both proud to be a veteran and a Legionnaire: two Chip Ganassi Racing (CGR) cars featuring The American Legion in their paint schemes.

In addition to the No. 48 car that has appeared in four previous races this year – two road course events driven by Jimmie Johnson and two oval races with Tony Kanaan behind the wheel – Bowman and the others watching in person or from home saw Alex Palou drive his No. 10 car using a livery with The American Legion as the dominant element.

Palou continued his strong start to the NTT INDYCAR Series, driving to a third-place finish. But for Bowman, just seeing The American Legion brand on one of the most famous tracks in racing history was special enough.

“Anytime I see anything to do with the Legion or the other organizations, I’m always attracted to it. It means a lot to me. “

Palou led one lap in the GMR Grand Prix but ran near the front all day. With his showing in Indy, he moved into second in the NTT INDYCAR Series points race behind CGR teammate Scott Dixon. The 24-year-old now has four top-seven finishes this season, including winning the season-opener in the Honda Indy Grand Prix of Alabama.

“I wanted to give (The American Legion) the win,” Palou said. “But it’s good that the first race that we are together we’re on the podium. It’s a good start to our relationship.”

Palou said it was an honor to drive The American Legion car. “I’m super proud that I’m representing all those people,” he said. “This was for them.”

The American Legion livery will now move back to the No. 48 car this week as Kanaan prepares to qualify for the Indy 500, a race he won in 2013. Kanaan drove the car to 11th- and 15th-place finishes at the Texas Motor Speedway May 1 and 2, despite starting at or near the back. He had the fastest practice lap prior to qualifications being cancelled because of rain.

Palou was joined on the track by Johnson driving the Carvana No. 48 car featuring American Legion branding. The seven-time NASCAR Cup Series champ started the race 23rd and finished 24th.  For Johnson, it was his first time driving an open-wheel car at IMS after winning NASCAR’s Brickyard 400 four times. The INDYCAR rookie now has three road course races under his belt this season.

“All in all, a really good weekend,” Johnson told CGR IndyCar following the race. “(I) didn’t have any really big issues or didn’t create any cautions like I did in the first two events. So I’m happy about that.”

Next up for Johnson is the June 12-13 Chevrolet Detroit Grand Prix at Belle Isle. “Things are just starting to make more sense, but it’s still so different and still so much for me to learn to really get what I need to from green flag to checkered in a race,” he said. “And then on qualifying, really trying to understand how to maximize the tires and get all I can out of it.”