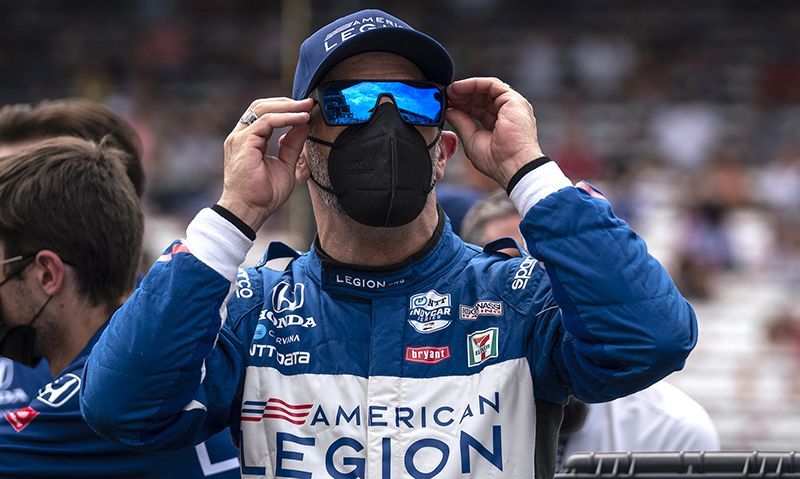 In January 2020, Tony Kanaan was talking retirement from auto racing, and The American Legion had no involvement in the sport at the national level. Much has happened since then.

On May 23, with the temperature of the track reaching more than 120 degrees, Tony Kanaan qualified The American Legion No. 48 car for the most iconic event in open-wheel racing – the Indianapolis 500. The INDYCAR Series veteran posted a four-lap average of 231.032 mph to finish fifth in the Firestone Fast Nine at Indianapolis Motor Speedway, qualifying the 2013 Indy 500 champ in the middle of Row 2 in the 33-car field.

In late 2020, The American Legion and Chip Ganassi Racing entered into a multi-year sponsorship agreement for the No. 48 Honda in the NTT INDYCAR Series. Seven-time NASCAR Cup Series Champion Jimmie Johnson is driving a No. 48 car featuring American Legion branding prominently in its paint scheme during this season’s road races, while Kanaan is competing in oval races.

Prior to that, Ganassi and Johnson had reached out to Kanaan about coming on as the 48 team’s oval driver; he drove The American Legion car to 11th- and ninth-place finishes May 1 and 2 in two events at the Texas Motor Speedway.

Kanaan qualified for the Fast Nine Shootout with an impressive opening qualifying performance May 22. He hit 232-plus miles per hour on his first qualifying lap, setting the crowd into rounds of applause and cheering. He settled into a four-lap average of 231.639 mph, good for second at the time and finishing the day third.

Afterward – and following more great crowd support as he pulled into pit row following his attempt – Kanaan told NBC again how thankful he is to be driving for a Chip Ganassi Racing after pondering retirement 2020. “This team has been, I mean, come on, what a change for me,” he said. “I told Chip … I don’t think he can understand this. How much I appreciate (teammate Jimmie Johnson) giving me the opportunity as well … The American Legion. (And) look at the crowd. I don’t want to talk about it because I might get extremely emotional. This is why I’m here.”

The Indianapolis 500 is scheduled for May 30 at 12:45 p.m. ET and will be broadcast live on NBC. For complete details, click here.