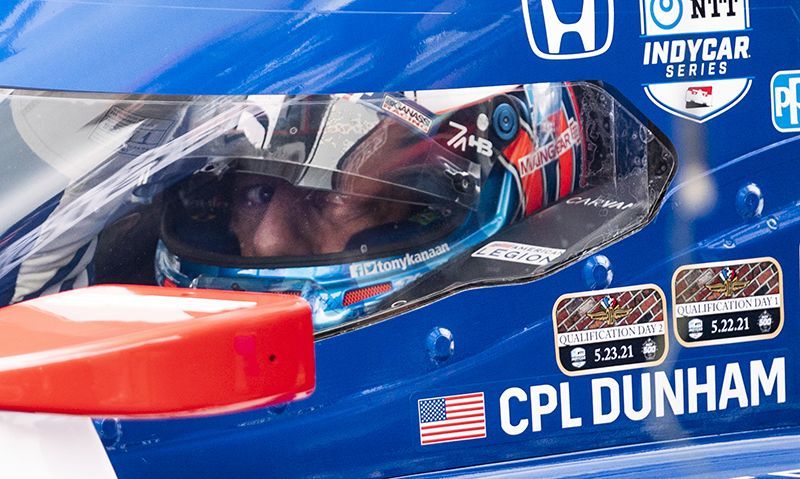 On May 30 at Charlotte Motor Speedway, NASCAR’s Kurt Busch will drive his Chip Ganassi Racing/GEARWRENCH No. 1 Chevy in the Coca-Cola 600. On his car will be displayed the name of Medal of Honor recipient U.S. Marine Cpl. Jason Dunham, who in 2004 died days after falling on a grenade to save the lives of multiple fellow Marines while on a reconnaissance mission in Karabilah, Iraq.

American Legion Executive Director Chanin Nuntavong, a Marine veteran, was instrumental in the initiative to recognize Dunham – a gesture Dunham’s mom Deb said left her family “both humbled us and gave us a great deal of pride.”

The American Legion No. 48 Honda, which will start the Indianapolis 500 fifth and is being driven by Tony Kanaan for Chip Ganassi Racing, also will bear Dunham’s name. Seeing her son honored during the NTT INDYCAR Series’ biggest event left Deb moved.

“When we learned that Tony Kanaan was also going to be carrying Jason's name on his car, I cried,” Deb said. “I could not believe that Mr. Ganassi had extended the honor of being on one car for Memorial (Day) Weekend to being on two cars. We were left speechless and very humbled.”

Any individual’s name on a Chip Ganassi Car is a rarity, owner Chip Ganassi said. But this was something different. “As our car is related, we have always thought that it is about the team and not just the driver, so we rarely – if ever – put an individual name on our cars. When I heard the story of Cpl. Dunham I thought it was the least we can do.

“It’s more of an honor for us to have his name on those cars. It is a bit humbling as he gave the ultimate sacrifice in serving his country, and the manner in which he did it is telling about the man. We are honored to run his name on both of the cars. That’s what Memorial Day is all about.”

One of the missions of The American Legion is to ensure the fallen and their families are never forgotten. Ganassi said sharing Dunham’s name on his cars is a good way to carry out that mission.

“Everyone is thankful to all our veterans, but sometimes making them even more aware about sacrifices they make for us helps drive the message home,” Ganassi said. “We owe Cpl. Dunham and many others such a debt of gratitude.”

Deb said she and members of her family will be watching both the Indy 500 and the Coca-Cola 600 from home this weekend. She hopes those who see Dunham’s name, as well as the names of the other servicemembers being honoring during the NASCAR race, think about those names.

“We are praying that when people see the names that all the drivers are carrying that they may look up what each fallen warrior did and remember that the fallen need to be remembered, (and) that our veterans and our active military need to be thanked,” she said. “Chip Ganassi Racing and Tony Kanaan are reminding us of those who have given all for our freedoms and privileges.”