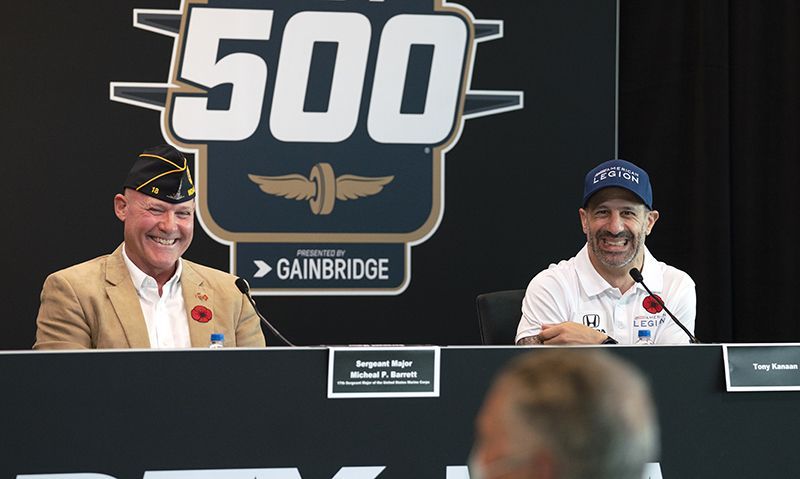 Sgt. Major Michael P. Barrett and INDYCAR driver Tony Kanaan smile at a question taken during The American Legion and Chip Ganassi Racing’s press conference at the Indianapolis Motor Speedway on May 27, 2021. Photo by Ben Mikesell

The partnership between The American Legion and Chip Ganassi Racing (CGR) extended beyond the track May 27 and into a crisis in need of a long-overdue solution: veteran suicides.

With the Indianapolis Motor Speedway – where Tony Kanaan will drive The American Legion 48 Honda for CGR in the May 30 Indianapolis 500 – serving as the backdrop, addressing the veteran suicide issue was the focus for American Legion representatives, Kanaan, CGR owner Chip Ganassi and retired Sgt. Maj. Micheal Barrett, who served as the 17th Sergeant Major of the U.S. Marine Corps.

“No other organization like The American Legion is poised to take on the biggest issues facing veterans,” American Legion Chief Marketing Officer Dean Kessel said. “Today, we’re here to talk about … stopping and preventing veteran suicide. This is the biggest issue facing this generation of veterans. We are going to be at the tip of the spear on this initiative to lead it into the next decade, however long it takes to wrestle this.

“We are not mental-health experts, but we know how to pull the right people together. We do have a tremendous peer-to-peer support network with our 12,000 posts.”

Barrett, a member of American Legion Post 18 in Bloomington, Ind., shared what he called “daunting” facts about veteran suicides. “Upwards of 20 veterans take their lives every day. Our nation’s veterans are at 50% greater risk of committing suicide than those that have never worn the cloth of this nation,” he said. “Those numbers don’t include data from the COVID-19 pandemic. Mental health professionals have told us the numbers could be much worse. Folks, this is unacceptable, but it’s also personal.”

The “personal” part for Barrett is that three of his longtime friends he served with in combat overseas took their own lives. “With each notification, I was floored,” he said. “It felt like somebody was standing on my chest, and with the heel of their boot they were stomping my guts out. It was heart-breaking. And I can’t even imagine what their families were feeling or what they were going through. So this is personal. It has to stop.”

Barrett used the press conference to announce what The American Legion has planned to help in those efforts. “First, we are going to fight for legislation that will bring about real, tangible solutions,” he said. “Second, we are going to leverage our vast footprint of over 12,000 American Legion (posts) in communities across the country to establish peer-support programs.

“Third, we know that we must do more research, either on our own or in partnerships with others. (We) will share our findings to help make impactful change.”

Noting that taking on veteran suicide requires financial means, Barrett announced that Veterans United Home Loans has committed $2 million to support The American Legion’s “Race to End Veteran Suicide.” The organization will use the funds to expand programs and opportunities for Legionnaires to obtain peer support training and distribute important mental health and wellness tools and resources through The American Legion infrastructure.

“There’s multiple steps that we’ll take, from a legislative perspective, from a peer-to-peer support perspective. Our job … is raising awareness of the initiative,” Kessel said. “It will be an evolving process. There will be things that we haven’t even recognized yet as we start to do the diligence on it. We are poised to take this on. It’s going to be a heavy lift. We know that. But there’s no organization like The American Legion that can handle this.”

Ganassi, who employs almost 20 veterans on his team, shared the joy he’s experience teaming with The American Legion on the racing program and the importance of doing so with the suicide-prevention effort.

“I can’t say enough about representing veterans, representing The American Legion. And we’re certainly proud to be here today to announce another initiative,” Ganassi said. “It’s days like today that make you proud to represent The American Legion. We’re here to make an announcement today that I think is going to be one of the most important things in the news this weekend … something here that I think will go down in history. They’re going to say ‘that was started at Indianapolis Motor Speedway on Memorial Day weekend.’ This is something we’re very proud to be associated with. For God’s sake, we need to stop veterans taking their own life when they come home.”

Kanaan said driving The American Legion No. 48 car in the Indy 500 is a good way to highlight the organization’s announcement. “We’re ready to fight this. We’re ready to help The American Legion,” he said. “Seeing how many veterans take their lives, now I have even a bigger motive to go out there and show them it’s worth it to come back. Whatever we can do to send a message. It’s not just about the race. It’s about saving lives and helping veterans. I feel like I’m ready to do it.”

Kanaan also introduced a new commercial featuring CGR’s Jimmie Johnson, seven time NASCAR Series champ now driving the No. 48 car on road courses this INDYCAR Series. In it Johnson shares what The American Legion has done for veterans through its 100 years and what it now will be doing to help prevent veteran suicide.

Barrett said he plans on being very vocal about this cause, which he added couldn’t come at a better time or from a better venue. “The Indy 500 is already the most famous race in motorsports, but today is a day that we are going to look back on in history and say, ‘It started here. It started with this race – the race to end veteran suicide,’” he said. “Help us save the lives of veterans who are suffering from the emotional scars of war or other overwhelming stressful life experiences. And for all those veterans who are looking for someone to talk with, I say ‘open the door – just open the door – to one of the 12,000 American Legion posts all across this wonderful nation. We are here. We care. We understand. Let us help.’”