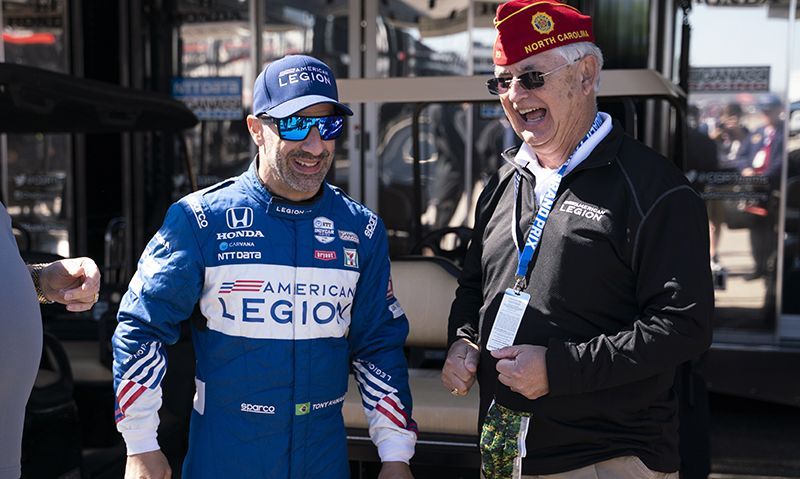 Tony Kanaan gets a few moments with American Legion National Commander Bill Oxford and other American Legion Family members prior to the Indy 500. (Photo by Ben Mikesell)

American Legion Family members from all over the nation gathered in Indianapolis May 30 to watch long-dubbed “The Greatest Spectacle in Racing.” And what they saw, and what millions of viewers across the world saw, was for the first time ever an American Legion presence in the race.

“I think this is a top-flight move,” said National Commander James W. “Bill” Oxford before the race, pointing to the fact Kanaan had just appeared on national television wearing a No. 48 American Legion hat. “It’s top-shelf advertising, and I think it means a great deal to our organization. It presents us in a whole different way. The image of the brand of The American Legion continues to rise. That’s what we want to say and want to present: We’re still here … still doing what we do. This exemplifies those kinds of things.”

American Legion Past National Commander Dave Rehbein said both Kanaan driving The American Legion car in the Indy 500 and seven-time NASCAR Series champ Jimmie Johnson driving the No. 48 car also featuring Legion branding on NTT INDYCAR Series road courses this season have a chance to make an impact on the organization’s growth.

“I think it’s a big step forward. Not just to have a car in the race, but to have drivers the caliber of Tony Kanaan … and Jimmie Johnson as he transitions into the road courses,” Rehbein said. “Jimmie is bringing, I think, a lot of NASCAR fans and a lot of NASCAR eyes with him as he moves into INDYCAR. I think this is really going to expose us to a lot of the younger generation of veterans and families that maybe don’t know that much about The American Legion, but they’re race fans.”

Last winter The American Legion and Chip Ganassi Racing (CGR) entered into a multi-year sponsorship agreement for the No. 48 Honda in the NTT INDYCAR Series, with the seven-time NASCAR Series champion Johnson driving during this season’s road races, and Kanaan driving the same car featuring The American Legion livery in oval races. Fellow Ganassi drive Alex Palou also drove The American Legion No. 10 car to a third-place finish in the GMR Grand Prix in mid-May.

Rehbein noted that The American Legion foray into INDYCAR is making an impact beyond ovals and road courses. He pointed to the May 29 announcement of a new focus on veteran suicide prevention and awareness with CGR that included a $2 million donation for the effort from Veterans United Home Loans.

“Every time we can expose a Tony Kanaan or a Jimmie Johnson – people like that – to what we really do, the programs we really do, it increases our ability to get deeper into that world,” Rehbein said. “They’re going to talk about what they’re involved with here. And I think as long as we can keep that conversation going, it’ll build for is. It will get bigger. I think we’ll see more names around The American Legion because of that.”

Oxford said the suicide-prevention effort “amplifies the impact that we wanted to have by becoming teammates with Ganassi. It put us in a great spot. The visibility and the things we’ve been able to do since (last winter) continue to multiply, and I don’t see anything but good things happening because of this relationship. It’s just great all the way around.”

Across the street at American Legion Speedway Post 500, which serves as a pre- and post-race hub for Legion Family members and Indy 500 spectators alike – as well as a large parking lot and campground – Kanaan had plenty of supporters. One of them was Post 500 General Manager Dave Wilson, who manned a table to collect $10 per person for the post’s annual race day breakfast.

“We’re big Kanaan fans,” said Wilson, a member of Sons of The American Legion Squadron 500. “I like Tony a whole lot. But it’s very nice to see the Legion getting out there and marketing itself more.”

But Wilson’s reasons for enjoying the Legion-Ganassi collaboration go beyond the racetrack. He said “raising awareness of the suicide situation and helping alleviate veteran suicide, that’s a pressing problem that we need to do everything we can to address that. I think helping raise awareness of The American Legion and who they are and what they do and what our goals are, they’re very, very important.”