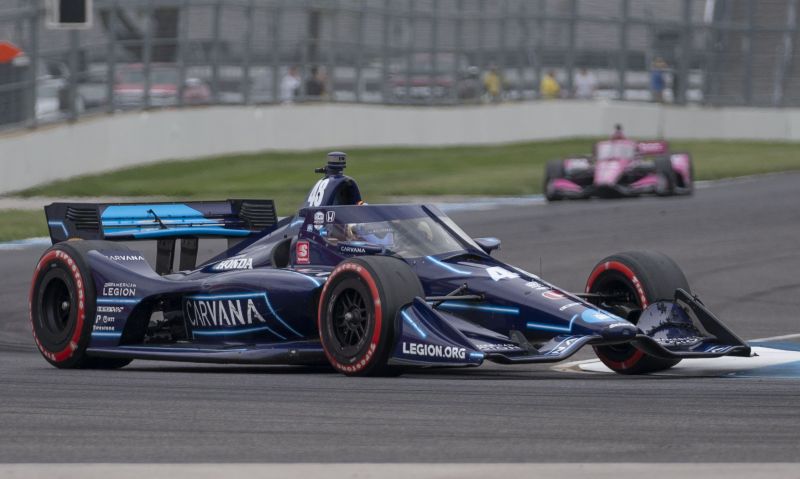 Jimmie Johnson will drive the No. 48 car in this weekend’s Detroit Grand Prix. (Photo by Ben Mikesell).

Jimmie Johnson returns to the cockpit of the No. 48 Carvana/American Legion Honda at Chip Ganassi Racing (CGR), as the seven-time NASCAR Cup Series champion is ready to hit the streets of Detroit.

The Chevrolet Detroit Grand Prix at Belle Isle will be Johnson’s first experience in an NTT INDYCAR SERIES doubleheader weekend. Tony Kanaan was the driver of the No. 48 American Legion entry at the previous doubleheader at Texas Motor Speedway in May. He was also the driver of the No. 48 American Legion Honda at the 105th Indianapolis 500 in May as the popular driver from Brazil started fifth and finished 10th, overcoming getting caught out on pit lane while running out of fuel on Lap 34.

Alex Palou, who finished second to Helio Castroneves in the 105th Indianapolis 500 on May 30, will carry primary sponsorship from The American Legion on the No. 10 Honda at Chip Ganassi Racing at both races in Detroit.

Johnson’s last race was in the May 15 GMR Grand Prix on the Indianapolis Motor Speedway road course.

Although Johnson was not competing in it, the legend got to experience his first Indy 500 in person with one of the best seats in the house – the NBC Pit Box that faced Turn 1 at the end of pit road. Johnson, along with former NASCAR crew chief Steve Letarte, were part of NBC’s telecast crew at the Indy 500.

“It was fun working for NBC, but it was also a little nerve-racking, a new thing for me to do,” Johnson told The American Legion. “But Steve Letarte made it easier and that is great. I’ve never been to the 500, and I wanted to be here and maximize what I could do for Carvana, for The American Legion, for my partners and for CGR because I wasn’t in the car at Indy.

“It was really good to work with the professionals at NBC. They are pretty darn good at it. Moonlighting for me in TV is intentional to have the experience and get some reps out of it. It is not what is calling me right now. What is calling me is driving cars. I’m a planner and like to set things up, but I am moonlighting and wondering if it can lead to something down the road.”

In addition to working for NBC, Johnson was part of Chip Ganassi Racing during practice and qualifying, as he worked with Kanaan to get a better understanding of what it takes to succeed in the Indianapolis 500.

In 2021, Johnson is driving the street and road course races in INDYCAR, but admitted he is giving serious consideration to adding the Indy 500 to his schedule in 2022.

“I want to experience things and try new things. Being on television is one. If you dream big, you want to be at the biggest race in the world, the Indianapolis 500. I’ve been able to pull that off. This checks quite a few boxes for me, to be an integral part of a big show is also a nice feather in the cap.”

Johnson intends to do an INDYCAR test on an oval for CGR later this year and indicated his family is more open to the idea of running the Indy 500 in 2022.

Johnson also made new friends with many members of The American Legion, a key partner in his INDYCAR endeavor.

“Anybody that is a member of the Legion, when they approach me and I see the pride that they have in the Legion and the racing program and in return the pride I have in them and how thankful I am that they have served our country, it’s a neat exchange of energy,” Johnson said. “I’m excited to see where the program is going. We are just in the starting phase of it right now.

“I have family members that have served. I’ve seen it and understand it to a degree and thankful to be part of a company that gives back. There are a lot of issues that the Legion is addressing and a lot of help they are providing to a lot of people and that is amazing.”

This weekend’s Detroit Grand Prix doubleheaders takes place June 12 and 13 at Belle’s Isle, a 2.35-mile, 13-turn temporary street circuit. Qualifications for Race 1 are from 11 a.m.-noon June 12 and will be broadcast on Peacock and NBC Sports. Race 1 starts at 2 p.m. ET and will be shown on NBC.

On June 13, qualifying for Race 2 start at 9 a.m. on Peacock and NBC Sports, while race coverage begins at noon ET on NBC. Click here for complete details on both races.