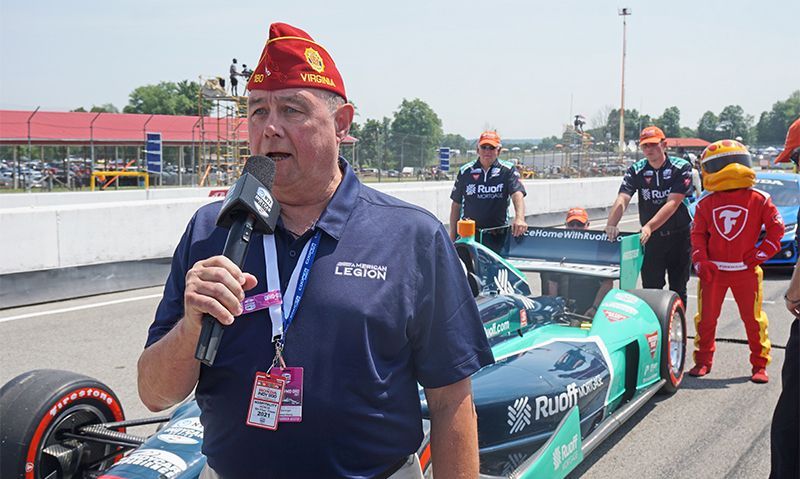 American Legion Past National Commander Dan Dellinger gives the “start your engine” order prior to the Honda 200. (Photo by Bruce Martin)

With The American Legion participating in Independence Day parades around the United States, Jimmie Johnson was representing The American Legion in the fastest parade on the Fourth of July: the Honda Indy 200 at Mid-Ohio NTT INDYCAR SERIES race at the Mid-Ohio Sports Car Course.

It was a true celebration of the 245th birthday of the United States, with American Legion Past National Commander Dan Dellinger serving as the grand marshal.

After Dellinger gave the command to start the race, Johnson’s No. 48 Carvana/American Legion Honda battled 25 other drivers in the high-speed parade that featured some fantastic racing throughout the field.

Johnson started 25th, and just one turn after taking the green flag to start the race had to steer his way through mayhem. Andretti Autosport drivers James Hinchcliffe and Ryan Hunter-Reay both made contact in the top 10, and Johnson was confronted with a cloud of smoke as several other cars, including Felix Rosenqvist, were involved in the crash.

Johnson drove through the smoke and debris in a “Days of Thunder” moment.

“They were all backwards by the time I got there,” Johnson said. “It was a lot of smoke and a lot of dirt. We restarted, and I was thankful I got by Will Power. His car was in a blind spot, and I missed him.

“I had a moment where I wanted to yell at my spotter for not telling me where Power’s car was parked, but we don’t have spotters around here. They are located in a different are and that’s not where they can see.

“I am learning and trusting my mirrors and senses way more than I have my 20 years in NASCAR.”

Former Sports Car, CART and NASCAR driver Scott Pruett was impressed with Johnson’s ability to get through the debris. Pruett serves as Johnson’s race strategist and driver coach at Chip Ganassi Racing.

“Jimmie did a great job dodging bullets, man,” Pruett said. “That was Jimmie’s natural talent as a driver. I’m sure all those things that he has experienced at Talladega and Daytona came into play.”

“It was a big honor to have all of The American Legion badges on my race car,” Johnson said. “I met some CarVets as well. I’m so proud of Carvana, the work they are doing to help vets and help them have jobs at Carvana.”

On the race track, Johnson had a solid effort and was able to run at a fast pace without making any mistakes. The seven-time NASCAR Cup Series champion, who is an INDYCAR rookie this season, believes it was his best complete race as he finished 22nd, one lap down to race winner Josef Newgarden of Team Penske.

“It was an awesome day for us, I really needed to have three clean stints during the race,” Johnson said. “It was a good, competitive pace. We adjusted the car, logged 80 laps and I’m excited to get to do this.”

That creates an intriguing element of racing strategy for each INDYCAR team, including Johnson’s No. 48 crew.

“After that, I struggled on the Black tires finding confidence and as soon as I went to the Reds, my day changed and had two really strong runs on Reds,” Johnson explained. “Today was very controlled, very smart with the way I approached things. The two sets of Reds we ran to finish out the race gave me a lot of confidence to push, and I got down with one-second of a lap of the pace the leaders were running.”

The NTT INDYCAR SERIES takes a month off because next week’s race originally scheduled for the streets of Toronto was canceled because of the ongoing COVID-19 pandemic in Canada. The rest of the break is because INDYCAR’s television partner, NBC, will be televising the Olympic Games from Tokyo across all of its platforms.

INDYCAR returns with the Big Machine Music City Grand Prix on the streets of Nashville on August 8. That is a new event and puts Johnson on an even playing field with every competitor in the series because nobody has raced on the new street course.

“It will be a closer starting point for us all,” Johnson said. “I’m hoping to get some simulator time, and although they haven’t been able to scan the race course, at least we will get some time in the simulator, understand the flow of the track, and where the turns are and get a rhythm for it.”