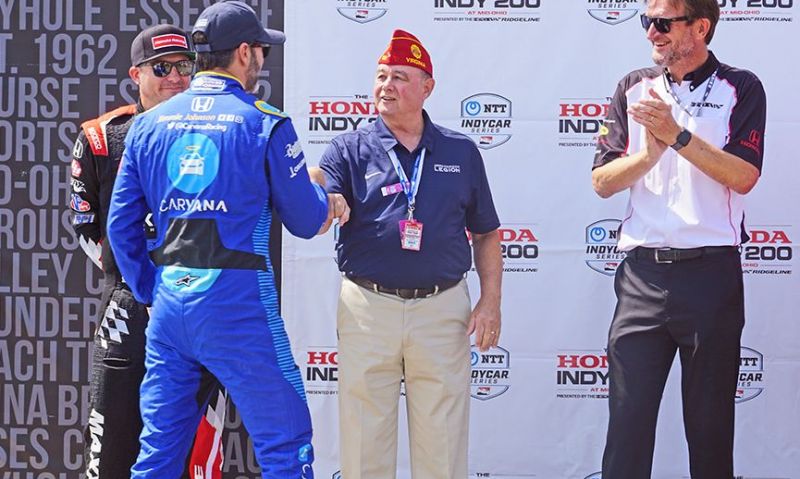 When American Legion Past National Commander Dan Dellinger got the phone call asking him if he would like to be grand marshal for the July 4 Honda Indy 200 at Mid-Ohio, the member of Post 180 in Vienna, Va., thought it was a wrong number.

“I couldn’t fathom that I would ever be a grand marshal at an event like this,” Dellinger said. “I was excited when they asked me to be the grand marshal. I’ve been grand marshal to other parades, and it’s always great to be somewhere representing the Legion, especially on the Fourth of July.

“It was the fastest parade I’ve ever been a part of.”

What he experienced over the weekend at the Mid-Ohio Sports Car Course opened his eyes to the dedication, commitment, teamwork, preparation, and execution that it takes to be successful in an NTT INDYCAR SERIES race.

Those are the same attributes necessary to be successful in a military operation. “You have the Honda people with their computers hooked up, checking out each car and the team making the final adjustments,” Dellinger said. “When the driver comes back from being out on the track, they are back at it again. The preparation is important. They are in synch and here to win a race.”

In addition to serving as the grand marshal, Dellinger got to meet every driver on stage during pre-race driver introductions, give the command to start engines to the field of 26 and ride in one of the ceremonial pace cars on the parade and pace laps of the race.

Dellinger was also there to show the Legion’s support of Jimmie Johnson, who drives the No. 48 Carvana/American Legion Honda for Chip Ganassi Racing.

Dellinger and his wife, Margaret, were able to meet Johnson in the Chip Ganassi Racing team transporter before the start of Sunday’s race.

“I’m an old NASCAR guy. I go all the way back to the Pettys and Bobby Allison and all of those guys. It’s been a long road. I’m not as involved as I used to be. I’m involved with The American Legion a lot. I remember my dad on Memorial Day listening to the Indianapolis 500 on the radio.

“It’s been developing over the years, but we never had the opportunity that we do today. It’s a proper fit that we can partner with Chip Ganassi and his patriotism. The amount of preparation and everything they have to do and talking to Jimmie Johnson about this, it’s really made me much more of a fan of Indy.”

Dellinger was able to spend some quality time with members of The American Legion Department of Ohio.

“When I was national commander, I came in for a convention and was here for a total of 24 hours, Dellinger recalled. “But, here, all the members of the Department of Ohio have been great and the comradery is there. It’s great to have some down time and renew some friendships.”

It also gave Dellinger and his wife a unique opportunity to celebrate the Fourth of July. “I was a speaker at an event on July 4 once, but I used to be a baseball commissioner and had an All-Star Game in my community, so I was either busy with that or in the honor guard presenting the colors at the beginning of it,” he said. “Even when I was national commander and had a July 4 off, I went home and marched on that field. It’s important to remember where you came from. That’s the thing about The American Legion: We are always veterans, and we are always working for the betterment of our communities.

“It never stops. The one thing about being retired is now I can work American Legion seven days a week instead of two days and at night.

The most important aspect of The American Legion’s involvement with Johnson, Chip Ganassi Racing and INDYCAR is to help bring awareness to the issue of veteran suicide. The Legion hopes to give a message of hope to those veterans who are suffering from despair.

“It is important,” Dellinger said. “The number is 22 a day and some people say that is underestimated. Any time we can use a partnership like Chip Ganassi Racing to get that word out across the country, saving any life we can is very important.

To see the Legion on TV during the INDYCAR telecasts is something that brings Dellinger great pride and tugs at his heart with another emotion.

“It’s a really good fit,” he said. “Any time we can help INDYCAR racing and branding our organization is important. Tony Kanaan was great at the Indianapolis 500. To see that car decked out and see Tony, with those in-car camera angles, was phenomenal, and that was a good way for us to continue to brand.

“It’s something I never thought I would see, but for that to happen is phenomenal. This is a good way to spend the Fourth of July. What better way than to celebrate the Fourth of July than with a race like this.”