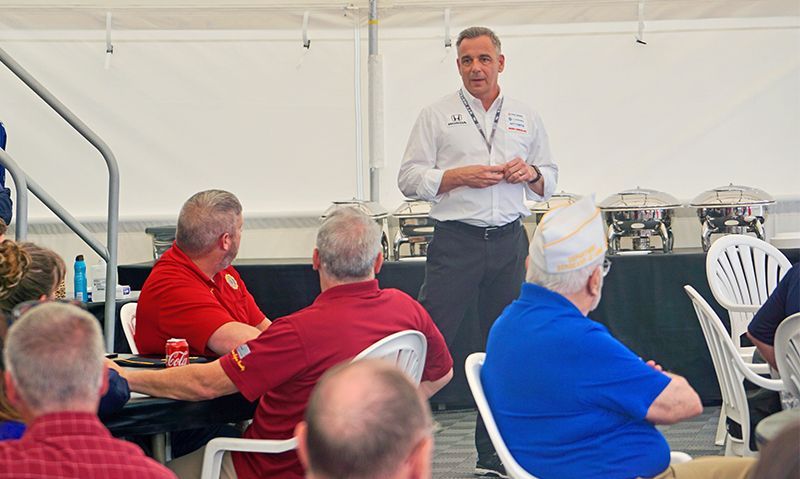 When Independence Day falls on a Saturday or Sunday, it creates one of the best ways to celebrate a great American holiday by turning it into a long weekend.

Members of The American Legion Department of Ohio got a head start on a very special weekend to celebrate the Fourth of July. In addition to celebrating the 245th birthday of the United States, a select group of Ohio American Legion members attended a special dinner hosted by Chip Ganassi Racing at the Mid-Ohio Sports Car Course on July 2.

Seven-time NASCAR Cup Series champion and INDYCAR rookie Jimmie Johnson drives the No. 48 Carvana/The American Legion Honda on the street and road courses in the series. Tony Kanaan, the 2013 Indianapolis 500 winner, drives the entry on the ovals.

American Legion Past National Commander Dan Dellinger of Post 180 in Vienna, Va.,  was the grand marshal for the Honda Indy 200 at Mid-Ohio NTT INDYCAR SERIES race on July 4. Dellinger and his wife, Margaret, joined the Department of Ohio members at Chip Ganassi Racing’s impressive hospitality unit for the dinner.

“To be able to have an event here is important,” said Ohio Department Commander Roger Friend of Post 804 in St. Louisville. “It’s definitely a good thing. A lot of people don’t realize we are that involved with the whole thing with INDYCAR. Now, it puts Ohio on the map with Indy racing. I’ve watched races here on TV but have never been able to be here for a race. I’m definitely honored this race is on the Fourth of July.”

“My first experience with open wheel racing was the Spanish Grand Prix Formula One race in 1971 when I was in the Navy,” Friend said. “We pulled into port there when the race was about to happen.

Ohio Department Adjutant Suzette Heller, a member of Post 1 in Columbus, served in the U.S. Army from 1993 to 2005. “There are a lot of veterans who like INDYCAR racing and also NASCAR,” she said. “I think that veterans who enjoy these things that don’t have a relationship with The American Legion, might ask themselves the connection and give them an opportunity to find out.

“We feel privileged that we are able to do this because we are with the department headquarters, but if every Legionnaire could have experienced what we just experienced with what Chip Ganassi Racing is doing with The American Legion and its purpose, I think they would feel more connected to this partnership we have. I think it is going to benefit the organization by building these relationships to have Legionnaires and veterans to be in one place together to learn about what we do and how to affect our communities. We are a grassroots organization.

“The American Legion is a staple in the community. We have American Legion Baseball, but we are in all spaces. There is racing and there is soccer and regattas. Now, we have INDYCAR. I think this is meeting the veteran where they are at.”

Heller also stressed that members of The American Legion can help support the program at the post level in areas where INDYCAR contests are not held. “You don’t have to be at a race to experience this,” she said. “You can go to your local post and watch it. It’s another opportunity to fellowship and gather.”

Steve Masowick is the Alternate National Executive Committeeman for Ohio and a member of Post 685 in Streetsboro. He was department commander from 2012 to 2013 and is an Indianapolis 500 veteran.

Masowick, was in the Navy in the South China Sea, Mediterranean and North Atlantic, attended the Indianapolis 500 in 1978, 1979 and 1980. “The cars were so fast, we got in the infield and tried to get in the corners to catch the number of the car,” he recalled. “This will be my first road race to watch.”

The American Legion is an important part of Masowick’s life. “My dad and his friends put our post together,” he said. “I don’t know where I would be without the Legion. It’s a great organization with great people. I’ve been a member since 1976, but when I was a kid running around with the grown-ups, that goes all the way back to 1964.

“It’s always a plus. We can sure use all the help we can. It’s hard to get people to commit to social obligations, and hopefully this helps encourage younger veterans to join the Legion. I can’t wait to see the race.”

Ohio National Executive Committeeman Robert Klostermeier, a member of Post 553 from in Toledo, Ohio, served as a helicopter door gunner in the Navy from 1963-67. He said The American Legion’s sponsorship in INDYCAR is “a great opportunity to have our faces out there.”

One of the major tenants of The American Legion sponsorship in INDYCAR is to help find a solution to prevent veteran suicide. Kessel explained the importance of the program to the dinner guests during his presentation.

“At the Indy 500 this year, we launched an initiative that is very important,” Kessel said. “The Legion is 102 years old, and it has a big, long history of tackling problems. World War I American Legion veterans set up the GI Bill for World War II veterans, creating an entire middle class. Creating $1 down for a mortgage and going back to college for free. That was a generational impact on America with that program.

“When the Vietnam veterans came home, World War II Legionnaires took care of Agent Orange, all the care and compensation around that.

As for Duchardt and Chip Ganassi Racing, they believed it was a perfect way to celebrate the great Independence Day holiday.

“It’s an honor for us to carry The American Legion colors and represent your group,” Duchardt told the crowd. “This weekend we have a special livery, paint scheme, with 145 service badges on that car from all the different Army, Navy, Air Force and Marines on that car. It’s a phenomenal livery and a real honor to be running that on July 4.”