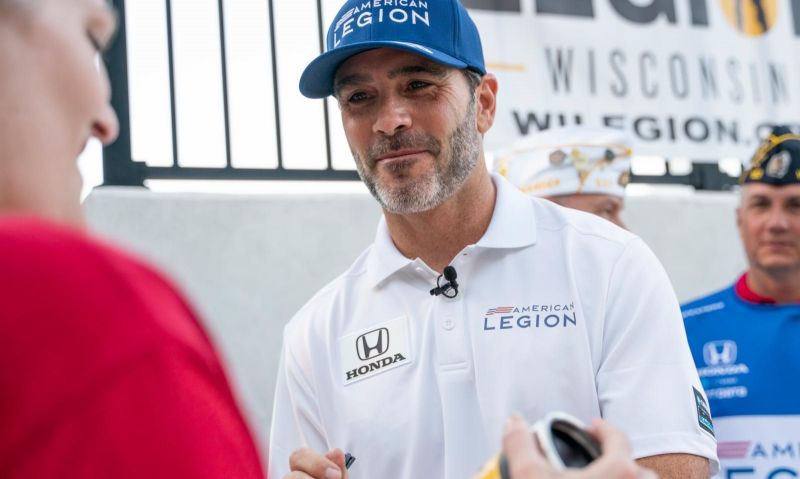 When Jimmie Johnson made the switch from NASCAR to INDYCAR for 2021 and 2022, the seven-time NASCAR Cup Series champion was content with a street and road course schedule.

That is about to change, however.

The driver who represents The American Legion in the NTT INDYCAR SERIES, revealed in late July that he will test the No. 48 Carvana/American Legion Honda for Chip Ganassi Racing on the oval at Homestead-Miami Speedway in late August.

According to Johnson, it’s the next step in his hopes of participating in the 106th Indianapolis 500 in 2022.

“We're looking at a Homestead test in August,” Johnson said on July 27. “I've been kind of out of pocket on vacation for the last week or two and need to dive back in, but last I heard things were really heading that direction for late August.”

Johnson’s current arrangement with the No. 48 Honda has the INDYCAR rookie in the car for the street and road course race with popular veteran, 2004 INDYCAR champion and 2013 Indianapolis 500 winning driver Tony Kanaan in that car for the oval races. Kanaan drove The American Legion No. 48 car to a 10th-place finish in this year’s 500.

Johnson said the arrangement with Kanaan will continue in 2022, but Johnson may be in an additional Chip Ganassi Racing entry if plans come together for the Indy 500.

“Either way, there's nothing for the Kanaan fans to fear. Tony will be racing in an INDYCAR in the ovals next season.”

During his outstanding NASCAR career that included seven championships and 83 Cup Series races, Johnson competed in many more oval races than on street and road courses in a stock car. It’s flipped in INDYCAR, as he currently has never driven an Indy car on an oval and believes it would better fit his skillset.

“I feel like there's some carryover, and if there is – of all the tracks we run on, street, road and oval, there should be some crossover on oval,” Johnson said. “I found there to be zero crossover on road courses, so that's interesting.

“I spent some time talking with Juan Pablo Montoya, and he felt like when he was able to return to INDYCAR after his NASCAR experience, that there was a lot of knowledge that he could bring over and driving technique, and he felt like he had a leg up on the traditional Indy car drivers at that point.

“That's the carrot that's hanging out in front of me. I'm running around the back of the pack now on street and road courses, and thinking, ‘Man, if I was on an oval where would I be?’ That's the balance I'm fighting with right now, the risk versus reward during an oval race.”

It’s important to Johnson that his family sign off on an Indy 500 attempt. The longer Johnson’s wife, Chandra, and their two daughters have been in the INDYCAR paddock, they have seen up-close the safety incorporated in the Dallara chassis along with the aeroscreen.

According to Johnson, they are more open to allowing him to compete in the biggest race of them all, the annual Memorial Day Weekend Indianapolis 500.

“Ultimately, I'm trying to understand the safety level of the Indy car on the ovals,” Johnson said. “That's really been my fear, from being a fan and watching from afar and watching my friends race on ovals. That's the part that's worried me.

“As a father of two and a deal I made with my wife a long time ago about the 500, I've kind of watched the ovals and really never thought that I could be out there.

“But then anticipating this year as a television commentator, being around the sport all season like I have, seeing a few big crashes at the Brickyard and speaking to the drivers after, I'm becoming much more comfortable with the ovals and with the crash dynamics that take place, with softer walls, the halo, the aeroscreen, the top of the car.

“I'm at a point now where in a funny way I'm willing to go hit a wall, and in some ways it's like, I'm not going to know unless I really hammer a wall how much it hurts, the difference between a Cup car and an Indy car.

“I need to go make laps and I need to understand what that experience is like, but ultimately I'm just trying to understand the safety level of the car, and as I get more comfortable with that, my participation on ovals will increase.”

Does that mean Johnson could potentially compete in an entire season in 2022?

“Right now, it's really just focused on getting ready for the 500,” Johnson said. “It would depend on how the test would go. Honestly, to run a full schedule next year would really be complicated, so I don't know how realistic that opportunity would be at the end of the day.

“We have a commitment with TK and the 48 car and all the sponsors that he was able to raise and bring on board to run those four races, so to run a one-off at the Indy 500 is a more realistic option than looking at the full schedule, but we'll just have to see how things unfold.”