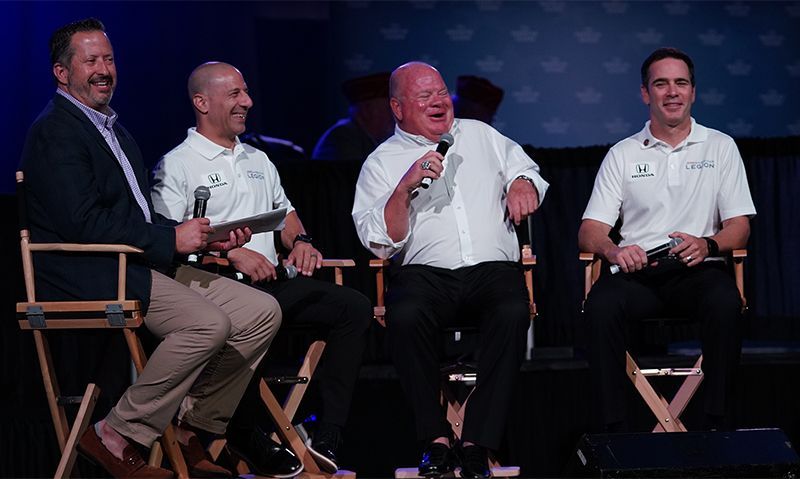 During a fireside chat on the national convention stage in Phoenix, INDYCAR and NASCAR team owner Chip Ganassi and two of his drivers, Jimmie Johnson and Tony Kanaan, shared stories about how they got started in racing and their career highlights.

They all three also used the word “honor” – specifically when referencing their partnership with The American Legion and the No. 48 car.

The American Legion and Chip Ganassi Racing are in the midst of a two-year agreement that has Johnson driving The American Legion-Carvana No. 48 car on road and street courses, while Kanaan has driven it in three oval races – including the Indianapolis 500, where he finished 10th.

The discussion was moderated by John Olguin, the senior vice president of marketing and communications for Ganassi Racing. He referenced the various sponsors Ganassi has had throughout his auto racing career and asked what it was like to add The American Legion to the list.

“It’s an honor to represent this organization,” Ganassi said. “It amazes me week after week … the local (Legion Family members) coming up and thanking me for … what we’re trying to do for The American Legion. And all I can think of when you’re thanking me is ‘I want to thank you.’ At the end of the day, you don’t have to thank me. I want to thank you for your service and everything you’ve done for this country over the years, and for what we hope to do for this country in the future.”

Johnson, a seven-time NASCAR Series champ now in his rookie season with INDYCAR, called the relationship with The American Legion “a massive honor. I think it’s been a fantastic partnership and one I have a lot of pride in. My mom’s father served in the Navy, and my dad’s father was in the Army. I’ve got a brother-in-law that served in the Navy as well. So that’s really a part of the framework of the Johnson family and my wife’s side.”

In May, The American Legion teamed with Ganassi Racing to announce a new effort to both address and reduce veteran suicides. Johnson recorded a PSA for the effort that has aired during network coverage of INDYCAR this season.

“I think many civilians in the country understand that it’s difficult to come back from serving, but I don’t think many understand the depths of that,” Johnson said. “For myself, it was a big education. And then to be able to do the PSA and help get that word out to everyone else has been really impactful and certainly something we need to correct. Be there for those vets returning and try to surround them with what they need to come back to civilian life. It’s something I’m very proud to be a part of and excited to really make a difference with that initiative.”

Kanaan, who won the Indy 500 in 2013 and the INDYCAR points championship in 2004, said the relationship with The American Legion has grown what already was a large fan base for the Indy 500.

“After 23 years in INDYCAR, you don’t think you can gather more fans or more appreciation,” he said. “As soon as we announced this deal, I cannot tell you guys how many text messages from veterans I got. It’s been amazing. I have so many coins (from Legionnaires) now. It’s so awesome.”

It’s also allowed Kanaan to learn more about the organization. “Getting to know more about what you guys do … it’s an honor,” he said. “I can’t tell how emotional for me it was to race that car in the 500.”