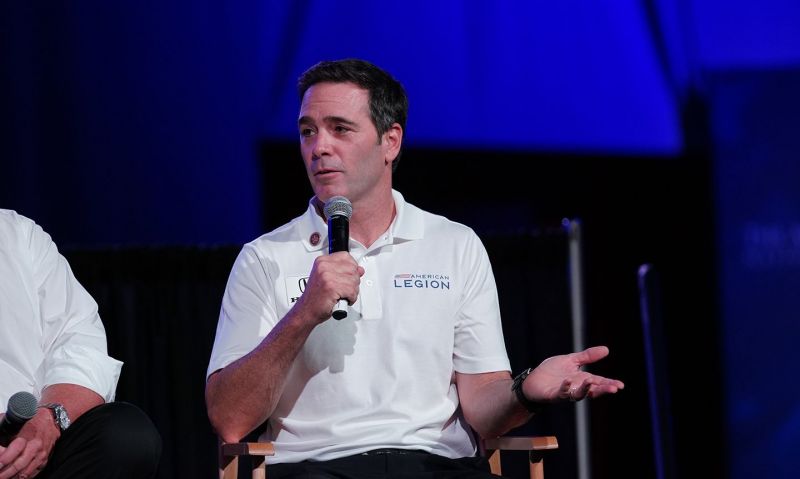 When seven-time NASCAR Cup Series champion Jimmie Johnson retired from stock car racing to become an NTT INDYCAR SERIES rookie with Chip Ganassi Racing, he signed a two-year contract that would end when he was 47.

The American Legion driver who is also sponsored by Carvana is having such a great time in INDYCAR, however, he confirmed he wants to remain in the series when the current contract concludes in 2022.

“I'm happy to go on the record and say I'll run as many years as possible in the NTT INDYCAR SERIES that Chip will have me, and I can find sponsorship,” Johnson said. “I am having such a good time, and every rep I get in the car, I'm only going to be better. If I were to come back in 2023, I think those expectations would rise up again, and my performance would be better yet. My intent is to stick around as long as I possibly can.”

Next up in Johnson’s quest for a potential Indy 500 in 2022 is a test session at Indianapolis Motor Speedway on Oct. 8.

“That's really the process,” Johnson said. “I'm eager to find out when that date in October would be for the rookie orientation. It looks like (Romain) Grosjean would normally be going through that, as well. A couple notable rookies going to the Brickyard and working through the orientation process. So that would be the next logical step for me in the car, and conversations are happening certainly with my family.

“I feel like that orientation would be the next logical step on track, and then following that would be more team-/sponsor-related conversations – ‘are we able to do it, how would we do it, what would that look like’ – and kind of use that second test session as a real moment to send me on my path towards potentially running the 500.”

The seven-time NASCAR Cup Series champion has admittedly had a difficult time adapting to the much different form of racing in INDYCAR but had an impressive oval track test at Texas Motor Speedway on Aug. 30.

According to INDYCAR, Johnson’s best lap was 214 miles per hour, which would have been fourth fastest in qualifications this past May at the 1.44-mile Texas Motor Speedway.

Oval racing seems to suit Johnson’s racing background, and his first INDYCAR oval test was a major step toward a potential run in the 106th Indianapolis 500 in 2022.

“I'm definitely a step closer,” Johnson said. “I think that there are more conversations to be had with family, team and sponsors, at least another test session ahead of me before I can really make a decision, but driving the car yesterday only piqued my interest more.”

Johnson’s time in a race car was not over when he concluded his first INDYCAR test on an oval at Texas Motor Speedway. He quickly flew to The American Legion National Convention in Phoenix and gave track rides to Legion members later that day.

Johnson told The American Legion he was probably behind the wheel of a race car for a total of eight hours Aug. 30. “I was able to take many on rides in some cars out at the Radford Racing School, which was formerly the Bondurant School,” Johnson said. “It’s a familiar place that I've run plenty of laps on, saw some old friends and instructors, met a lot of new friends with Legion members, and took them on an e-ticket ride around the racetrack. It was a fun day.”

Johnson, along with fellow American Legion/Chip Ganassi Racing driver Tony Kanaan and team owner Chip Ganassi, were on stage at the convention the next day speaking to Legionnaires. They also participated in a Q&A with Legion members.

“The way we could work in our eight-hour testing time window was to start early, so we started at 6 a.m., which meant a 4:30 wake-up call for everybody,” Johnson said. “I actually missed Scott Dixon’s (arrival). I was a few minutes late. He was checking belts in the seat in the race car at 5 a.m., which was quite impressive.

“I’m very thankful for his efforts to come and shake the car down for me.”

Johnson and the No. 48 American Legion/Carvana Chip Ganassi Racing team return to action this weekend at Portland International Raceway in the Grand Prix of Portland on Sept. 12.