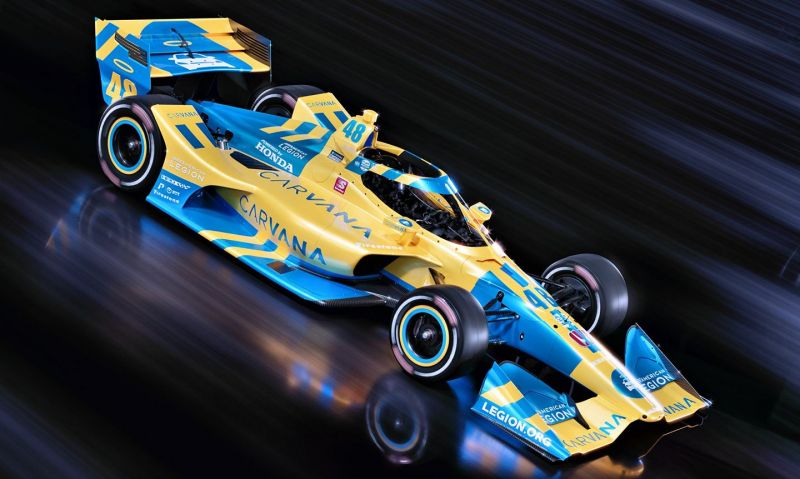 From the Andrettis to the Unsers, from Bobby Rahal to Emerson Fittipaldi, from Alex Zanardi to Alexander Rossi, some of the greatest names in open wheel racing have competed at the 12-turn, 1.964-mile Portland International Raceway.

This year, for the first time ever, a seven-time NASCAR Cup Series champion will join the list of the greatest drivers in racing that have competed at Portland.

It’s Jimmie Johnson, who at 45 is in his NTT INDYCAR SERIES rookie season as driver of the No. 48 Carvana/American Legion Honda at Chip Ganassi Racing.

The driver from El Cajon, Calif., makes his West Coast debut in an Indy car in the Sept. 12 Grand Prix of Portland. The former NASCAR legend tested at Portland on July 30 and is hopeful the test will help him get up to speed when the series returns for the race.

“Straight away I was more comfortable and ended up eight-tenths off the pace of my teammates,” Johnson said of the Portland test. “I feel like it’s the most competitive I have been and the most comfortable that I have been. It’s a very different track than the ones I have been on so far.

“In a short lap I was surprised we were under one-minute on our lap. It’s a track where I will have to execute well. That’s been a problem for me. Pit ins and pit outs. Cold tires. I’ve been losing too much time in those situations. A longer track gives me more time to play with. At Portland, even though I was very comfortable, it’s going to require me to execute better with some of my weaknesses on cold tires.”

Portland kicks off the final three races of the season that will help determine the 2021 NTT INDYCAR SERIES championship. Although Johnson won’t be battling for the title, he has had a blast during his rookie season driving a completely different race car than the No. 48 Chevrolet that made him a racing legend in NASCAR.

After the Grand Prix of Portland, Johnson heads to WeatherTech Raceway at Laguna Seca in Monterey, Calif. Johnson has had two tests at that track and is hopeful the extra seat time will improve his performance.

“Laguna is a track I dreamed of running at as a kid,” Johnson admitted. “I really hope the extra testing time at Laguna helps. I hope to be in the pack racing. I’ve had a couple opportunities to be in the pack racing. I certainly hope with the race experience I have between now and Laguna and the fact I have tested at Laguna that it puts me in there.”

Johnson’s rookie season wraps up in the season-finale, the Acura Grand Prix of Long Beach. It’s a race that Johnson attended with his father as a kid growing up in Southern California.

It’s where he got to watch racing heroes named Mario and Michael Andretti, A.J. Foyt, Rick Mears and a driver known as “The King of the Beach” – Al Unser Jr.

“I still remember going as a young kid, being there in April and the excitement of a new season and the energy that went with that,” Johnson recalled. “I've hung on the fence and have dreamt of being on the inside.”

It was the annual trips to the Acura Grand Prix of Long Beach that inspired Johnson to become a race driver. Since that time, he has enjoyed a legendary career including 83 victories in NASCAR Cup. He is one of only three drivers in history to win seven NASCAR Cup Series championships. The other two are legends Richard Petty and Dale Earnhardt.

Admittedly, Johnson has found it challenging to adapt from an outstanding career in NASCAR to the much different type of racing in INDYCAR, but when asked why he is doing this, his face brightens into a smile.

“It’s a popular question, but I always wanted to experience an open-wheel car and, specifically, always wanted to race an Indy car,” Johnson said. “When I was young and growing up on the West Coast, that was the arc that racers took, and INDYCAR was the sport to be in at the time.

“I’m very fortunate to be in the position where at 45, I’m still able to chase a childhood dream.”

At the top of Johnson’s list of supporters is the team owner, the legendary Chip Ganassi. Even without the statistics to show it, Ganassi has seen dramatic improvement in Johnson’s ability to drive an Indy car in his first season.

Most importantly, however, it’s the way Johnson carries himself as a champion that has had the greatest impact on Chip Ganassi Racing.

Johnson’s work ethic is legendary. When he isn’t racing, he’s spending time using all of the tools available to him, including the Honda Performance Development simulator in Brownsburg, Ind. When he isn’t using that, he’s on the phone talking to his engineer, Eric Cowdin, and his teammates to learn as much about INDYCAR as possible.

He has learned some valuable lessons as a rookie, and in spite of the struggles, he is having a blast.

“It's been beyond my expectations, honestly,” Johnson said. “The cars, the tracks, the people within the sport, the experience I've had, it's been greater than what I could have hoped for, so I've really enjoyed my six months, seven months of really being a formal INDYCAR driver.

“About a year ago obviously that fire was lit, and after chasing that from July to November, December, when we were able to put things together, I had no idea what was in store for me, but again, it's just overdelivered.”

The final three weekends of racing begins at Portland, continues at Laguna Seca before concluding on the streets of Long Beach.