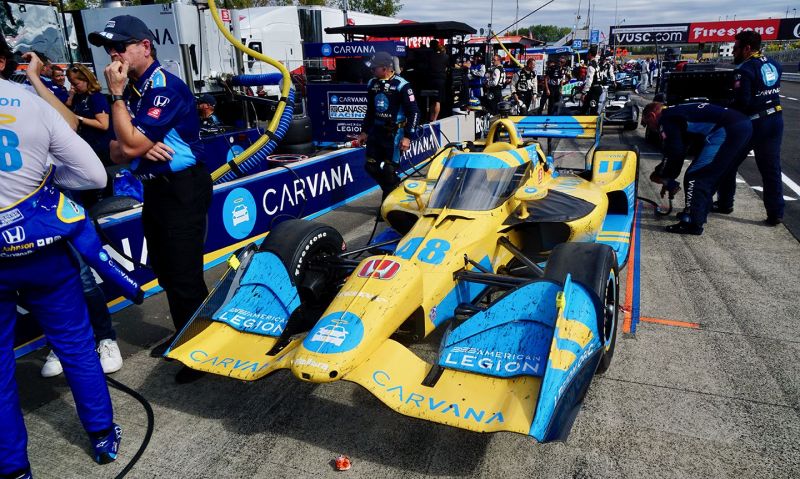 An increase in confidence has given Jimmie Johnson the green light to get out and race the Carvana/American Legion No. 48 Honda in the NTT INDYCAR SERIES.

Johnson put together another solid INDYCAR race effort at Portland International Raceway this past weekend. He completed every lap in Sunday’s 110-lap Grand Prix of Portland and had a highly entertaining battle in the closing stages of the race with four-time Champ Car Series champion Sebastien Bourdais.

The two drivers did the “cross-over” maneuver heading down the long frontstraight going into Turn 1. Johnson, a seven-time NASCAR Cup Series champion before joining Chip Ganassi Racing’s (CGR) INDYCAR team as a 45-year-old rookie, successfully pulled off the pass, but a few laps later Bourdais was able to regain the position.

“Jimmie Johnson did a great job,” said Dario Franchitti, a three-time Indianapolis 500 winner and four-time NTT INDYCAR SERIES champion who is working with Johnson at CGR. “Did you see the cutback he had with Sebastien Bourdais? Lap times were competitive. I bet he had so much fun racing Sebastien Bourdais. That was cool seeing Jimmie do that.

“You can’t compare where Jimmie is now compared to the start of the season. He has made so much progress and he does every week. It was a good job for our team today.”

By developing confidence in the No. 48 Honda, it has allowed Johnson the ability to battle the competition. He has gone from learning the new type of racing machine to utilizing its capabilities.

“I thought it was a lot of fun,” Johnson said of his battle with Bourdais. “I don’t know if he did. Something I failed at during the beginning of the race today was defending with the overtake button. I had track position on my side but lost a lot of spots because I didn’t defend correctly. When Bourdais was back there, I had a better idea how to defend and use my tools better.”

Johnson qualified 22nd and finished 20th, but he drove a solid race with competitive lap times and is building confidence in his switch to INDYCAR.

“I’m getting better at it,” Johnson said confidently. “I don’t want to be the guy making rookie mistakes, so I’m trying to be calculated and very smart with the passes I try to make and even getting in the way at times. My battle is a little different than some of these guys on track. Trying to keep a head on my shoulders is part of it.

“Finished up with a solid performance here at Portland. It’s an amazing race track. Great energy from the fans. It’s another solid day. I ran all the laps and finished on the lead lap. We had some good battles on the race track. Unfortunately, I’m stacking nickels. I wish I was stacking quarters or more, but I’ve closed up the gap so far. Now, it’s up to working on the fine details and working on my reps to get up closer to the pack.”

Johnson drove an eye-catching yellow and blue Carvana/American Legion No. 48 Honda – this week’s selection by race fans who have been voting on Johnson’s paint schemes this season.

“Good looking race car,” Johnson said. “I’m really happy with the paint scheme on the car this week and really, all of the weeks it’s been special that the fans are voting on what I have been driving is really neat for me.

Teammate Alex Palou started on the pole and won the race, despite running off course at the start of the contest and getting moved to the rear of the field. He went from 10 points down to 25 points ahead of Pato O’Ward in the battle of the NTT INDYCAR SERIES championship heading into this weekend’s Firestone Grand Prix of Monterey at WeatherTech Raceway at Laguna Seca.

“I’m very happy Alex won,” Johnson said on pit lane. “I assume strategy played a big role in it. But they had so much pace. He and Julian Robertson and that entire team had swagger when they showed up here. It put them in a position to go and off he went in the race.”

Johnson’s performance earned him raves from former drivers Franchitti and Scott Pruett, who have both been working with Johnson this season at Chip Ganassi Racing in his transition to INDYCAR.

“Jimmie did a great job continuing to make huge steps forward,” Pruett said. “The whole Carvana team is working hard. We gave up a few spots in the pits today and had a little bit of a bobble on the right rear, and that cost us three or four positions in the races. We hate doing that, especially when he is running as good as he is.

“Long story short, he is working with the tools in the car, learning how to go wheel to wheel, racing these guys as we saw out there. We are going to keep building on it. We have Laguna and Long Beach.”

Eric Cowdin is Johnson’s engineer, and Pruett calls the race strategy and helps coach Johnson from the timing stand. Together, they have been able to refine Johnson’s racing talent as he continues to learn INDYCAR.

“It’s been exciting for me and his passion of what he wants to do working together on the team with Eric Cowdin and all the guys, everybody is up on their game and working hard,” Pruett said. “What we saw at the Indy road course in August and what we saw today at Portland, there is nothing like going wheel-to-wheel with a guy in INDYCAR until you go out and go wheel-to-wheel with a guy.

“Jimmie is used to going fender to fender, now he is going wheel to wheel in INDYCAR.”