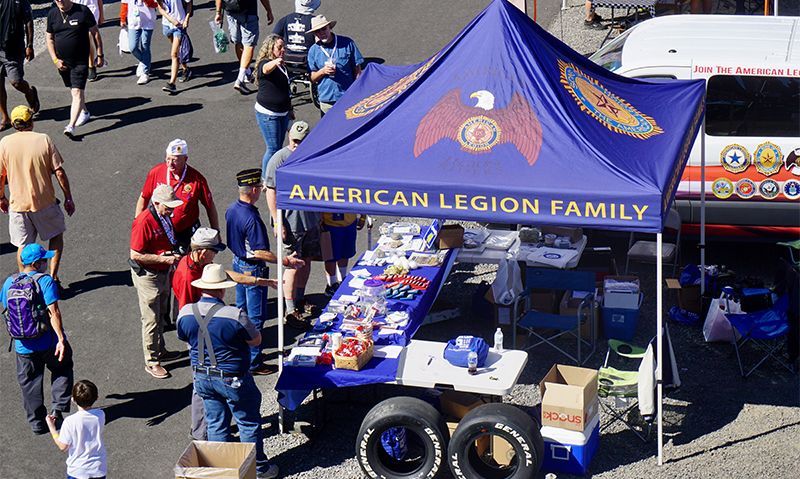 One of the key components of any professional sports sponsorship is activation. It’s one thing to put the sponsor logo on a uniform or a race car such as in the NTT INDYCAR SERIES, but activation and support helps get out the message of the sponsor’s goals.

The Department of Oregon of The American Legion did a tremendous job in activation this past weekend at the Grand Prix of Portland. It set up a tented, 10-foot-by-10-foot display next to the main pedestrian bridge that leads race fans into the INDYCAR paddock.

That prime location allowed The American Legion to display its message through a variety of literature and other promotional items free to guests, help drive potential membership in the Legion and give current members of the organization a place to share fellowship with other Legionnaires.
“The Legionnaires that were here this weekend, from the picture I took before the race started, to the grand marshal and the variety of Legion members I met today, made this a great weekend,” Johnson said. “They love racing, they love this relationship and it’s an honor to represent them on the track.”

The booth was staffed by Department of Oregon members from throughout the state.

“When (The) American Legion started sponsoring, that is when we decided to jump in and set up this display,” Department of Oregon Commander Don Weber said. “We are here to give information to veterans. One of the key things we want to take on this year is the reduction of veteran suicide, with that being as high as it is. Some of the articles we have here are from the Veterans Center from the VA to help promote that. We also want to host current members and drive membership for this weekend.”

Oregon American Legion Auxiliary President Debra Godwin, a member of Unit 21 in McMinnville, said it took about one week of planning get help organize and set up the booth. “It is extremely important,” she said. “The Auxiliary is here to support our veterans that is what we are doing today. The fellowship is important because The American Legion is a family, and we all work together. That is what The Legion does.

“I think it’s an honor to have Jimmie Johnson as our lead guy.”

John Lee is a district vice commander and commander of Post in Brownsville. He was impressed with the level of support from members of the Legion from throughout Oregon.

“They have come from all corners of the state, from Coos Bay, Ore., to Valley – really all corners of the state are here,” Lee said. “I’m an INDYCAR fan now, even though I was more of a NASCAR guy. I’ve watched INDYCAR for a long time, too. I really like the Indy cars. They are a lot of fun. To have drivers like Tony Kanaan and Jimmie Johnson is remarkable to have that support. Hopefully, it will have more people support the Legion and what we do.”

Andy Millar served as Department of Oregon commander from 2014 to 2015 and currently serves on the National Executive Committee. He strongly supports The American Legion’s INDYCAR sponsorship with Chip Ganassi Racing and driver Jimmie Johnson.

“It’s an excellent program, and it has paid dividends since we started,” Millar said. “This is tremendous exposure. We’ve also received donations in excess of $5 million in time and dollars. It has really paid off and it’s only six months old.

“We’re pushing the veteran suicide prevention this month and the 48 Car will push that program.”

The Department of Oregon booth greeted visitors and members of the Legion from Friday, Sept. 10, through Sunday, Sept. 12. That included the 20th anniversary of 9/11.

Weber concurred. “We want to remember and never forget what this day means,” he said. “We have some posts out for 9/11 that are doing special ceremonies, including a large remembrance down in Albany. Dave Sullivan, the post commander in Albany, was in New York and worked on a response team after 9/11, 20 years ago.”

The impressive activation by the Department of Oregon gave tremendous exposure to the Legion to the many fans that attended last weekend’s Grand Prix of Portland.

“I hope this program continues past the first two years because this program allows us to get out in front of people that we never would have gotten in front of before,” Weber said. “I think the veteran support of racing overall brings a huge number of people here.