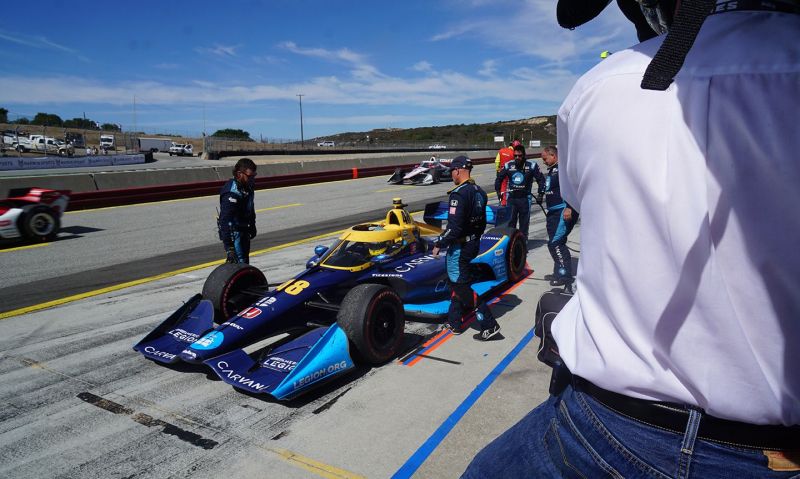 A season of learning a different form of racing for Jimmie Johnson culminates with the race that started his racing dream in the 1990s.

It’s the Acura Grand Prix of Long Beach, Calif., where Johnson was just a kid and one of the many spectators that came to the event and dreamed of one day becoming a race driver.

This weekend, Johnson will go from race fan to the starting grid in the No. 48 Carvana/American Legion Honda for Chip Ganassi Racing.

“I am so excited to be here and so thankful for this opportunity,” Johnson told The American Legion. “I was a teenage kid coming to this race and dreaming of being in the race. This was also, when it was traditionally held in April, my check-in with Chevrolet (his racing supporter at that time). We would lay out the following year and makes plans for where my career was going to go.

“Not only did I dream about being a race driver here, but I also found out what my fate was for the following season.”

Johnson’s inspiration to become a race driver began at the Acura Grand Prix of Long Beach more than 30 years ago.

At that time, he was a youngster from El Cajon, Calif., who looked forward to the beautiful spring days in Southern California. That meant a trip with his dad to his favorite sporting event, the annual Acura Grand Prix of Long Beach where the top drivers in CART would race on the streets of this beautiful seaside community.

Before he went to the race for the first time in 1990, Johnson watched the big names of auto racing compete on the streets of Long Beach.

It’s where he got to watch racing heroes Mario and Michael Andretti, AJ Foyt, Rick Mears, and a driver known as “The King of the Beach” – Al Unser Jr.

“I still remember going as a young kid, being there in April and the excitement of a new season and the energy that went with that,” Johnson recalled. “I've hung on the fence and have dreamt of being on the inside.

“I honestly have never gotten an autograph, but I would stalk, I would watch and study any team or driver that I could. Back then, I didn’t have passes to get anywhere so my exposure was pretty limited.

“Robby Gordon was the first driver that I got to talk to. He came out of the off-road industry, and we knew his family very well and Robby very well. Ironically, now I’m meeting more of the drivers from that era that I didn’t have access to and have been able to get to know. I was a big Al Unser Jr. fan and have gotten to know him and Jimmy Vasser was somebody that I was into and really liked his vibe.”

The Acura Grand Prix of Long Beach is generally held every April but was canceled in 2020 because of the COVID-19 pandemic. The Long Beach Grand Prix Association decided to move the 2021 Grand Prix to the last race of the season in September so that fans could attend the annual street race that is one of the largest sporting events held in California every year.

It was the annual trips to the Acura Grand Prix of Long Beach that inspired Johnson to become a race driver.

“I was hooked by the sound of the cars,” Johnson said. “I’ll never forget walking across the street, and you could hear the cars racing by and it would make my skin crawl. I couldn’t believe what I was hearing. The crossover bridge on the back straightaway hearing the cars, that was the moment for me.

“There are so many positive memories that I have from there. I spent a lot of time in the Long Beach area, some of the beaches nearby growing up. It was neat to see something so big come so close to home for me and have these heroes of mine racing on that track.

“For me, it’s neat that it’s finally here and I’m really glad to be a part of it.”

Since that time, Johnson has enjoyed a legendary career including 83 victories in NASCAR Cup. He is one of only three drivers in history to win seven NASCAR Cup Series championships. The other two are legends Richard Petty and Dale Earnhardt.

The recently turned 46-year-old Johnson is no longer a kid, but he is a rookie in the NTT INDYCAR SERIES driving the No. 48 Carvana/American Legion Honda for Chip Ganassi Racing on the street and road courses on the 2021 schedule.

On Sept. 26, Johnson will achieve a childhood dream when he competes in the Acura Grand Prix of Long Beach.

“To have a chance to race there closes this loop from a childhood dream to make it reality,” Johnson admitted. “To be close to the area I grew up, I'm sure I'll have tons of friends there from my hometown and then new friends that I've met over the years that want to come in and support. It's going to be a very fun weekend, and Sunday night we'll have plenty to celebrate.

“I can’t wait to race there next April and check that box, but I am really excited it’s at the end of the year now so I will have a full year of experience to put my best effort forward on that iconic track in such a special, emotional moment for me.”

The first half of Johnson’s rookie season in INDYCAR saw him trying to learn the new type of racing machine and acclimate himself to a completely different form of racing. The second half, however, has seen Johnson make progressive improvement from race-to-race.

He is coming off his most competitive race of the season, when he was able to master the famed “Corkscrew” at WeatherTech Raceway at Laguna Seca. He was able to pass long-time, INDYCAR veterans on the track, including a spectacular battle with James Hinchcliffe.

“It really has been important and shows how specialized this form of racing is,” Johnson said. “The commitment level required to make one of these cars go is quite high. As I get more comfortable with the car and learn the tracks and where to place the cars on the tracks, my performance level gets better.”

The American Legion has been a vital part of Johnson’s rookie season in INDYCAR as a major associate sponsor on the No. 48.

“Their support, commitment and pride they have to be in the sport as well is unmatched. It really is an honor to have them on the car. Every Legionnaire that I meet is full of such pride with a big smile on their face. It’s really been cool.”

One of Johnson’s favorite moments came at the recent American Legion national convention in Phoenix. Johnson was giving rides to Legion members in a high-speed race car.

“One of them told me, ‘I survived a war. Stand on the gas and scare me.’ That was the ultimate moment,” Johnson said.

Now, it’s Johnson’s turn to hit the streets of Long Beach and compete in the race that started his dream as a youngster over 30 years ago.

Admittedly, Johnson has found it challenging to adapt from an outstanding career in NASCAR to the much different type of racing in INDYCAR, but when asked why he is doing this, his face brightens into a smile.

“It’s a popular question, but I always wanted to experience an open-wheel car and specifically always wanted to race an Indy car,” Johnson said. “When I was young and growing up on the West Coast, that was the arc that racers took, and INDYCAR was the sport to be in at the time.

“I’m very fortunate to be in the position where at 46, I’m still able to chase a childhood dream.”