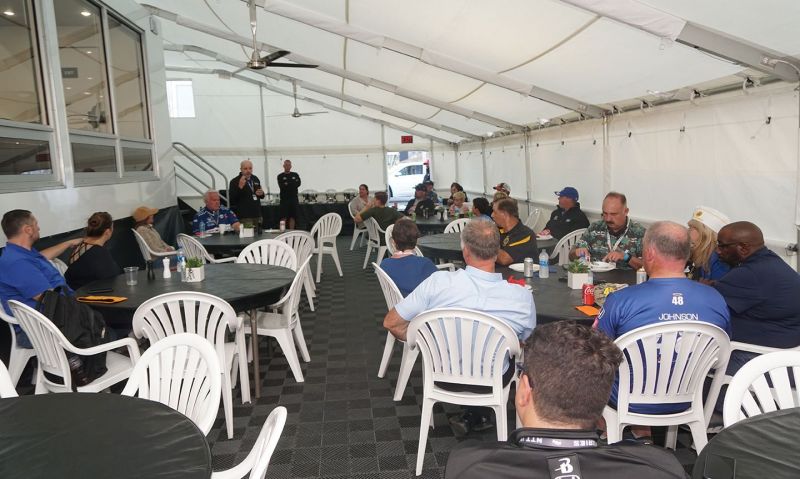 A valuable part of The American Legion’s involvement in the NTT INDYCAR SERIES with Jimmie Johnson and Chip Ganassi Racing has been its weekend “outreach” dinners with local Legion members.

The most recent was held at Chip Ganassi Racing’s Hospitality motorhome on Saturday night, Sept. 18, at WeatherTech Raceway at Laguna Seca as part of the Firestone Grand Prix of Monterey.

Key members of the California American Legion, including Department Commander Autrey James and Department Adjutant Barbara Lombrano, attended the event, along with a collection of Legion members from throughout the state of California.

American Legion Chief Marketing Officer Dean Kessel explained the key components of The American Legion’s involvement with Johnson and Chip Ganassi Racing. The guest speaker was Earl Barban, who serves as Johnson’s “spotter” during the races but also drives and tends the motorhome that Johnson and his family use during race weekends.

“This is a big initiative for The American Legion, and one that we have never done at this kind of level before,” Kessel said. “It’s a big commitment not only in money, but in resources. From the Legion’s perspective, we’ve had an amazing year. We’ve partnered with Chip and his team, Jimmie Johnson and Tony Kanaan, and they have done a great job of extending our voice and amplifying it.

“There are a tremendous number of veterans and military that are involved in motorsports or fans of motorsports. Our mission with this program is very simple and that is drive membership and create awareness.”

Kessel said that effort includes looking at both the past and future. “The American Legion is 102 years old, and the challenge now for our organization is how do you take all of this history and relevance that we have in the organization and make it relevant for our next generation of veterans?” he said. “We tackle the biggest problems facing veterans. The GI Bill and what we did for Agent Orange are examples.”

“We have platforms, programs, people to talk about it, we have really smart people in Indianapolis and in here in California and we are prepared to tackle this issue,” Kessel said. “We are going to change the conversation to saving veterans, even if it’s one a day because the other number will come down. This is a way to amplify our voice.”

Barban has been worked with Johnson for much of his career when the driver was one of NASCAR’s all-time greats, winning seven NASCAR Cup Series championships at Hendrick Motorsports. Barban is a former member of the Marine Corps Reserves from the St. Louis area. He began his career building show cars for Team Penske.

“I was floundering around outside of that, and when I walked into the race shop, I realized this is what I needed to do,” Barban recalled. “I started working at Penske as truck driver, gas man, jack man then lead mechanic.

“When you are fit and young you can jack up the car and gas the car and jump under the car. But as you get older, it’s easier for people to push the radio button and say ‘clear.’”

“Jimmie had asked my wife and I to work for him a number of times, and this is my eighth month working in INDYCAR,” Barban said. “It was a really big honor. It’s been a fabulous ride and an honor to be involved and have The American Legion as a sponsor.

Barban described the differences in spotting for a NASCAR driver and the style that is used in INDYCAR. “They want us to talk more and tell them about lines and where they can drive in NASCAR more so than in INDYCAR,” he said. “They are wigged out, out there and have all kinds of things to keep track of, such as fuel savings and power turbo boost. There is so much going on out there, so you have to reassure them they are doing well.

“If you look at Jimmie Johnson’s statistics, these cars are ridiculous how much harder they are to drive. My guy wins seven Cup championships and 83 wins, but we are getting so close with so much improvement. We are disappointed the season is coming to an end, but he is going to be so much better next year.”

Barban admitted when he started racing, he didn’t know much about Indycars. But he started to watch the series about three or four years ago.

Barban revealed that Johnson cooks his own breakfasts. Barban’s wife will prepare lunch and dinner for the family in the motorhome. “His day is 12 hours a day working with the team and trying to get better,” he said. “He is absorbing as much as he can.”