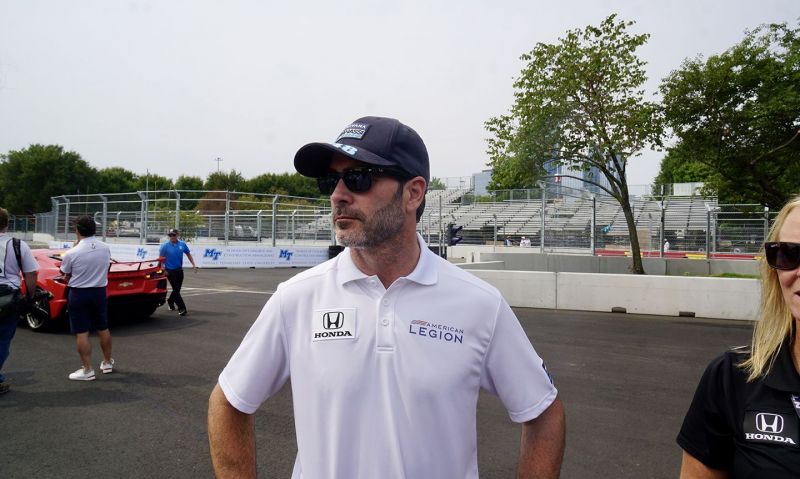 Jimmie Johnson gets a chance to fulfill another racing dream Oct. 6, at 10:30 a.m. Eastern Time. The seven-time NASCAR Cup Series champion who just completed his NTT INDYCAR SERIES rookie season will get to drive the No. 48 Chip Ganassi Racing Carvana/American Legion Honda on the 2.5-mile Indianapolis Motor Speedway oval.

It’s a key first step toward Johnson potentially competing in the 106th Indianapolis 500 in 2022.

“There is still a lot to sort out – team and sponsor aspect,” Johnson said. “But before I get to that, I just want to drive at Indy and understand what that speed feels like and what those challenges are. Then, communicate with my family on how badly I want to do it and how we sit with it.

“The test at Indy will help me with that decision.”

The 2021 NTT INDYCAR Series season ended with the Acura Grand Prix of Long Beach on September 26. Less than two weeks later, Johnson will be back in a race car, but the first time since a test at the end of August that he will be on an oval.

By having the Indy 500 ROP so close to the end of the season, Johnson is “race ready.”

“I think that’s important,” Johnson said. “I hope to get through the ROP part and get to run and use some data to see how I stack up with the others. I want to be competitive if I do it.

“The ROP test has its series of speeds I need to achieve in each phase. From after that, I want to see how my speeds stack up to others. The ROP is the next step for INDYCAR to clear me to go to another test, an Open Test.

“Building confidence is key to going fast in one of these cars. I’ve finally been able to break through that step.”

Johnson and Grosjean were originally going to test on Friday during a Firestone tire test, but INDYCAR President Jay Frye decided it would be better that both Indy 500 rookies get an unencumbered day for ROP.

“It’s going to be exciting to see how he does on an oval,” Frye said. “Racing on an oval is his bread and butter, and I think he is going to do great.”

Eric Cowdin is the race engineer for the No. 48 Honda at Chip Ganassi Racing. “It’s about focusing on the short-term goal,” he said. “It’s about passing ROP. It’s about giving him a good feel for a consistent car at the Speedway and getting him that experience. That opens up all the windows for what he decides he wants to do in the future.

“It’s a short-term goal with a long-term vision.”

The American Legion will be along for the ride as Johnson takes his ROP as the organization continues as a key supporter with Chip Ganassi Racing and the No. 48 Honda.

“I knew we would have some crossover from my fan base, but then to have Legion members make that transition as well is meaningful,” Johnson said. “Every Legion member I’ve met has had so much excitement to be at the track and be part of things; it’s refreshing to see them and be around them.

“There is a lot going on in INDYCAR, from my crossover to the Formula One drivers that are coming over. This is a good time to be involved in INDYCAR.”

By switching from NASCAR Cup to the NTT INDYCAR SERIES, Johnson has brought more attention and eyeballs to this form of racing. In fact, he believes more NASCAR teams and drivers have discovered INDYCAR through his efforts in 2021.

“I feel like it’s hard to look around when you are in NASCAR because it’s just so busy,” Johnson said. “I’ve been surprised how connected INDYCAR drivers are to other forms of racing, including NASCAR. The grind of NASCAR keeps those guys from expanding and learning the scene more.

“At the Indy GP, Ryan Blaney and Cliff Daniels came and looked around more, and I’m hoping with more INDYCAR/NASCAR doubleheaders they will get a chance to learn more about INDYCAR.”