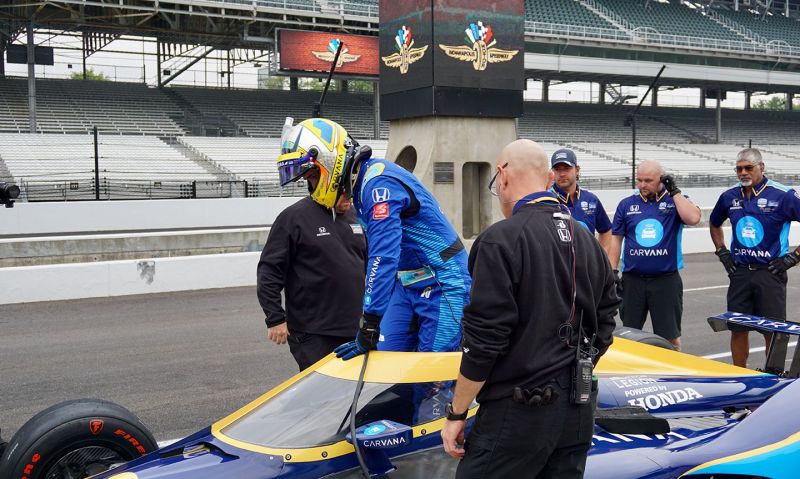 Jimmie Johnson gets into the No. 48 Carvana/American Legion car prior to participating in the Rookie Orientation Program at Indianapolis Motor Speedway. (Photo by Bruce Martin)

Although he still owes 10 laps to INDYCAR, Jimmie Johnson passed two of the three phases of the Indianapolis 500 Rookie Orientation Program (ROP) and will be cleared to compete in full field practice for the 500-Mile Race in 2021.

After breezing through the first two phases of ROP, a heavy rainstorm flooded the race course around 4:35 p.m. Eastern Time, and that ended the day for both Johnson and Romain Grosjean of Andretti Autosport.

Grosjean was just two laps short of completing the third and final phase, which is 15 laps at 215 and over miles an hour. Johnson is 10 laps short, but can complete those 10 laps as part of next April’s full field Indy 500 “Open Test.”

“It was just a special day to drive an Indy car at the Indianapolis Motor Speedway,” Johnson said after driving the No. 48 Carvana/American Legion Honda for Chip Ganassi Racing (CGR). “I have truly, truly enjoyed it. It was a childhood dream come true. The experience is more than expected and something that I really, really enjoyed.

“Big thanks to everybody at CGR, Carvana, The American Legion. Dario Franchitti flew across the pond to come, be a part of it, Marcus Ericsson was there, Tony Kanaan, Scott Dixon was texting in, Alex Palou was on the simulator and texting in. My CGR family was keeping a close eye on me, helping me get up to speed, which I think came in pretty easily, especially through these phases take place. I dodged some rain showers. I certainly didn't run as many laps as I hoped to. In the crunch, I felt like I got up to a great pace and had a good sense of the car around the track.”

Wednesday’s ROP was originally scheduled to run from noon to 6 p.m. But the threat of rain in the afternoon led IndyCar officials to move the start of ROP to 10:30 a.m.

Johnson was on the start of his sixth lap in the morning when moisture developed on the race course to turn on the yellow caution light. Grosjean had just completed one and a half laps.

“It was a six-lap tease,” Johnson said at the time. “It was nice to work into things. As the tires came up to temp, I could see the potential in the car. I was trying to hit that target lap time and clock laps, but then the rain came, and it didn’t work out.”

The rain increased, but IMS and IndyCar officials were able to dry the race course in time to open the track shortly after 3 p.m. Both Johnson and Grosjean sailed through Phase 1 and Phase 2 before beginning the third and final phase.

“I heard so many drivers talk about the slower miles an hour, Phase I, in the rookie orientation, was difficult,” Johnson said. “The car is less stuck because you don't have the vehicle speed to create the downforce. I was able to experience that firsthand. As we had the car limited in speed, the car moved around a bit more. I was trying to adapt to the speed, just how fast things were coming at me. As we worked out of Phase I into Phase II, started into Phase III, the car was just more stuck. Running flat was very easy to do. We trimmed out quite a bit because we were getting ready to make our final run when the clouds opened up on us.

“Things felt surprisingly similar. Once I got through the notion of downshifting and upshifting through the course of the lap, the speed at which things were coming at me, the driving line, the technique, even the behavior of the car in different turns around the racetrack was all very familiar to me. I was very excited to see that.”

Heavy rain clouds began to move into Indianapolis and the two drivers ran out of time before the track was soaked with a downpour. It stopped raining at 4:30 p.m. – not enough time to completely dry the track and have enough daylight to complete Phase 3.

“I definitely wanted to complete it,” Johnson said. “It's so hard to get laps in an Indy car on the race track with the right tire. We didn't even get into our third set of tires. Thirty or 40 laps more that I could have run that I didn't get to experience. At this stage of my INDYCAR career, every lap makes a difference. Certainly, on the ovals it makes a huge difference for me.

“It was a bit of a tease. I feel a little shorted. INDYCAR did a great job of getting the track ready the first time. Then the second time, now, I mean, it still hasn't stopped raining, so there really was no chance to get back on track today.”

But it was enough to dramatically increase Johnson’s desire to compete in next year’s 106th Indianapolis 500.

“All that said, there's still a lot of work between now and really pulling through with this opportunity.”

Johnson still has to decide if he will compete at Indy, but it appears that he is getting closer to making a positive decision and entering the biggest race in the world. He must discuss it with his family, team, and sponsors, including The American Legion.

Johnson drove on the IMS oval 18 times in the Brickyard 400. He won the famed race four times. But those races were in the bigger, slower NASCAR stock cars. Twice this year, Johnson has driven an Indy car on the IMS road course.

Wednesday was the first time he got to drive an Indy car on the Indianapolis Motor Speedway oval. He felt the history of that moment.

“I did,” Johnson said. “It was more from watching some video that Earl Barban, my spotter, took as I came through Turn One. I didn't have as big of a moment when driving it.

“When I saw a video from the outside, I could hear the sound of the Indy car, watch the speed, see it was my livery on the car. That was the moment that really got me.”