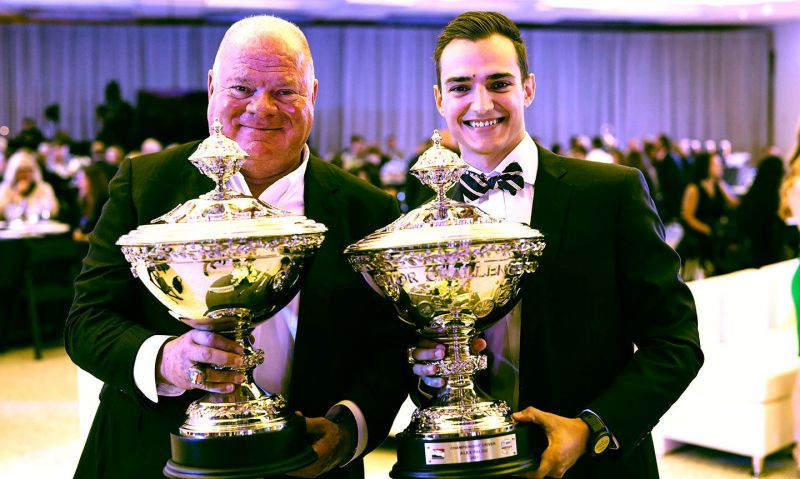 Although its primary focus was with Jimmie Johnson and the No. 48 Honda, The American Legion played a key role in Alex Palou’s NTT INDYCAR SERIES championship season.

The highlight for Palou and The American Legion was a trip to Victory Lane for his second win in 2021 in the REV Group Grand Prix at Road America in Elkhart Lake, Wis., on June 20.

The fifth race for this combination was the Bommarito Automotive Group 500 at World Wide Technology Raceway at Gateway on Aug. 21. In that contest, Palou was involved in a crash with Rinus VeeKay and teammate Scott Dixon on Lap 65 and finished 20th.

Palou and his No. 10 Honda crew at Chip Ganassi Racing were honored at the IndyCar Victory Lap Celebration at the Indianapolis Motor Speedway Museum on Oct. 1. Palou, the 2021 NTT IndyCar Series champion, was awarded with a miniature version of the Astor Challenge Cup.

“My teammates were a huge help this year. Josef Newgarden made it exciting at the end when he won the pole and was leading those laps. And Pato O’Ward, you’ve been amazing. Good job. Last but not least, I have to thank my girlfriend, Esther, and my family. I’m driving in the best series with the best teammates. It’s like a dream that I never want to end.

Team owner Chip Ganassi also received his own Astor Challenge Cup and thanked The American Legion for its role in the team’s 14th INDYCAR championship.

“How about this guy, Alex Palou? What an impressive season. For this being his second year in the series, he drove like a wily veteran. With guys Pato O’Ward, Will Power, Scott Dixon and Josef Newgarden chasing him down all year, he never flinched. He never even flinched when he hit the wall here at Indianapolis.

“I can’t tell you in strong enough words how proud I am of Alex. That being said, drivers win races, but teams win the championships. I’m really, really happy with the guys on the 10 car and what they were able to accomplish with this championship. Alex also had mentors to lean on like Dario Franchitti, Scott Dixon, Marcus Ericsson, Jimmie Johnson, and Tony Kanaan.

“I also want to thank the captain of this ship, Roger Penske. In the past two years, this sport has been thrown some curveballs. Roger and his staff with Jay Frye, they were ready for those curveballs and the entire series thanks Roger for that.”

The full-sized Astor Challenge Cup is a permanent trophy that is kept at the Indianapolis Motor Speedway Museum.

The celebration has continued through October for Palou and his team. Palou got to meet “The King” and James Bond in his trip to Charlotte Motor Speedway on Sunday, October 10.

The 24-year-old driver from Spain along with his girlfriend Esther were invited to attend the NASCAR Cup BankofAmerica ROVAL 400 by team owner Chip Ganassi.

A few hours later, Palou met actor Daniel Craig, the most recent James Bond in the highly successful James Bond movie franchise. Craig, one of the world’s most sought-after movie stars, was the honorary starter of Sunday’s NASCAR Playoff race. He reprises his role as James Bond in the upcoming film “No Time to Die.”

Palou’s brush with fame actually began Saturday night when he attended his first-ever concert headlined by “Pitbull” at the nearby PNC Music Pavilion last Saturday night.

On Monday, Palou toured the NASCAR Hall of Fame in uptown Charlotte to learn more about the history of stock car racing.

Palou watched Sunday’s race from the Chip Ganassi Racing’s pit box and was surprised that he was recognized in the NASCAR Cup Series garage area by many people.

“It was more than I thought and that is good,” Palou said. “I think that is part of what comes with being the INDYCAR champion. I’m happy to be here enjoying a NASCAR race.

“As the champion, I get recognized a bit more than I used to. I’m happier than normal, but that’s about it. It didn’t change me much. I’m feeling super comfortable and confident for next year because I will have more experience.”