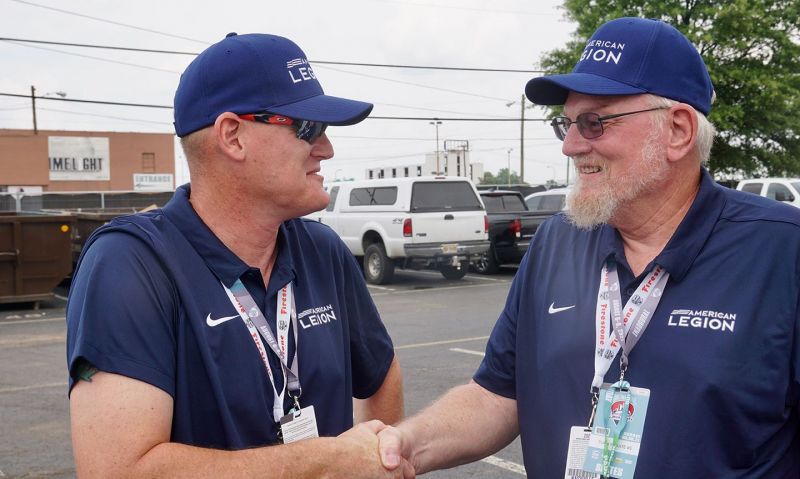 Jimmie Johnson and Chip Ganassi Racing helped introduce many members of The American Legion to the thrilling world of the NTT INDYCAR SERIES in 2021.

But to Legionnaire Doug Haggan, a member of the Department of France and past national vice commander, he was already hooked on the high-speed racing action of INDYCAR.

He guesses he has been to “hundreds” of auto races throughout his life, including many Formula One contests and 27 Indianapolis 500s. His first Indy 500 was in 1994 when Al Unser, Jr. drove Team Penske’s “Beast” Mercedes-Benz engine to victory.

Haggan, who is a native of Northern New Jersey, attended several NTT INDYCAR SERIES contests in 2021, including the Big Machine Music City Grand Prix in Nashville on Aug. 8.

“This is great,” Haggan said. “This is top-shelf. I really, really appreciate how the city of Nashville went out of its way to cross their Ts and dot their Is. They did a fantastic job.

“They picked something unique. This is going to be the Long Beach of the East.”

Haggan is a volunteer at The American Legion’s national headquarters in Indianapolis. He attended all three INDYCAR races at the Indianapolis Motor Speedway in 2021, including the GMR Grand Prix on May 16, the 105th Indianapolis 500 on May 30 and the Big Machine Spiked Coolers Grand Prix on Aug. 14.

“I really believe this program has turned American Legion members into INDYCAR fans. I’ve been to a number of tracks, and you would be surprised how many Legionnaires are going to the races. They are there.”

A major point of emphasis is preventing veteran suicide. The American Legion has taken dramatic steps in giving troubled veterans a program to help get them through difficult times in an effort to prevent suicide.

“I’ve been a big proponent of that,” Haggan said. “You have 911. You have 211. Why don’t we have a three-digit number for veterans? If a veteran is going to contemplate suicide, there should be a quick access number they can get quick access from.

“We’ve all seen something in the military. I, myself, have flashbacks. There are certain situations civilian people don’t understand. We can relate to what is going on with other veterans.”

“That’s what we need,” Haggan said. “We need younger veterans to join. We’re all getting old. I’ve been a member for 46 years. We need the younger people to keep the legacy going forward and to help with suicide prevention, our veterans affairs programs, and our children and youth programs.

“Membership is now going in the up direction, and that is a positive. We ran through a rough year with COVID, just like everybody else around the world. Things are now starting to move upward.”

Haggan was a tech sergeant in the U.S. Air Force from 1971 to 1992. His home post is in Frankfort, Germany, at Rhein-Main Air Base. There are 55 departments around the world, with six departments outside the continental United States.

He specializes in the history of The American Legion at its national headquarters in Indianapolis.

His favorite driver has always been Mario Andretti, who Haggan started following when he was younger because Andretti’s hometown of Nazareth, Pa., is nearby.

But he also admires Johnson because of his personality and connection to The American Legion.

“He’s a salesman,” Haggan said of Johnson. “He is very good at getting our message across.”