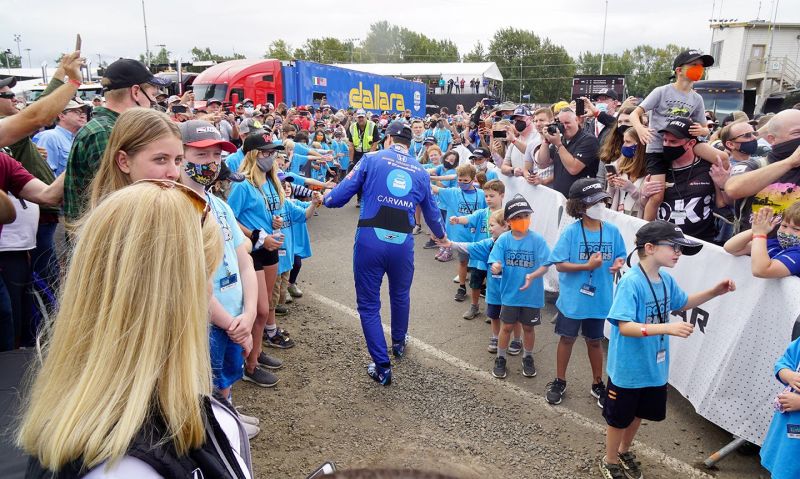 Jimmie Johnson admitted that he showed progressive improvement throughout each race in the 2021 NTT INDYCAR SERIES season. But The American Legion driver admits that where he finished is where he hoped he began the 2021 campaign.

“I thought I was going to start the season where I am now, and I’m sure many others thought the same,” Johnson said. “But it’s been way different and more complicated than I imagined.

“Building confidence is key to going fast in one of these cars. After a few mistakes, you lose confidence and have these setbacks that double cross you and hurt you more than you anticipate. I’ve finally been able to break through that stuff.”

“I knew that reality when we went to Laguna to test last November,” Johnson said. “I said, ‘OK, we’ve got a way to go yet.’ I would say the reality set in at Barber Motorsports Park in the first race of the season. When we got in the race at Barber, those guys drove off.

Johnson was primed and confident for an improved run on the streets of Nashville, but after a series of crashes in practice and qualifications, he was out of the race at 18 laps and finished 26th.

“Nashville was setting up to be a big weekend for me, but I made a few mistakes and that set me back,” Johnson said.

Determined to improve, from that point forward, the Chip Ganassi Racing driver began to learn how to race in an Indy car the second half of the season.

He started 22nd and finished 19th on the Indianapolis Motor Speedway road course in August, showed improved raceability at Portland before completing the season with his two best finishes of the season.

In that race on the track where his racing dream started as a teenager, Johnson was able to pass four-time Indianapolis 500 winning driver Helio Castroneves and the 2021 NTT INDYCAR SERIES Rookie of the Year, Scott McLaughlin.

Following that race, he removed his INDYCAR “Rookie Stripe” – yellow tape on the rear attenuator that signals to cars coming from behind that it’s an inexperienced driver at the wheel.

“The season went by super-fast, but I think about my progress throughout the course of the year,” Johnson said. “I think about my team and how it has grown and become stronger as a unit. And I think about how strong Chip Ganassi Racing is. All of the wins, success and Alex Palou’s championship, it’s great to be part of this organization, watch it grow as well as all of my personal growth.”

Johnson finished every race he competed in except Nashville.

“One thing Scott Pruett has really helped me with is we push hard until qualifying and after that, let’s drive laps we can repeat, learn and get from green flag to checkered,” Johnson said of his driver coach at Chip Ganassi Racing. “That’s been a great piece of advice and has helped me grow the most throughout the year.”

Since the conclusion of the season on Sept. 26, Johnson participated in the Indianapolis 500 Rookie Orientation Program on Oct. 6.

He easily completed the first two phases of the three-phase program before rain ended the session. Johnson and fellow Indy 500 rookie Romain Grosjean will be allowed to complete Phase 3 with other cars on the track as long as they complete the required number of laps at more than 215 miles an hour.

Johnson has raced the No. 48 Lowe’s Chevrolet and Ally Chevrolet NASCAR Cup car on the Indianapolis Motor Speedway oval 18 times in the Brickyard 400. He won that famed event four times in his career, including back-to-back wins in 2008 and 2009.

He compared the sensation of racing into Turn 1 in an Indy car to what it was like in a slower stock car.

“I’m not at speed yet, but at 208 miles an hour, it’s still as intimidating as it was when I was in (NASCAR),” Johnson said. “I think it’s the most intimidating corner in motorsport. Believe me, I can’t imagine running through there flat. It still seems outside the realm of possibility.”

Although he has not officially announced if he will compete in the 106th Indianapolis 500 next May, Johnson seems to be leaning in that direction.

“Everybody has been very kind to let me take this test and let me decide,” Johnson said. “Everybody has given me the chance to experience the rookie program.

“All of our partners are excited no matter what decision we make for next year. If we add on the 500 or more, especially the 500 would be a plus-up. I’m serious about running the Indianapolis 500 and that is why these test sessions are taking place.”

Throughout the season, Johnson has taken The American Legion along for the ride by serving as its spokesman and meeting Legion members at each racing venue.

“It’s great, and I knew we would have some crossover from my fan base,” Johnson said. “To have Legion members make that transition as well is meaningful. Every Legion member I’ve met has had so much excitement to be at the track and be part of things. It’s been refreshing to see that and be around them.”

Just one year ago, Johnson completed his incredible NASCAR Cup Series career that included a record-tying seven Cup titles and 83 victories. He knew INDYCAR would be a challenge, and that is exactly what his rookie season was – a challenge.

One year later, Johnson believes the best is yet to come in INDYCAR.

“There is a lot going on in INDYCAR. From my involvement in the crossover to these Formula One drivers coming in and the interest they are bringing, to the staple INDYCAR drivers that are carrying their own and making it entertaining.

“This is a great time to be involved in INDYCAR.”