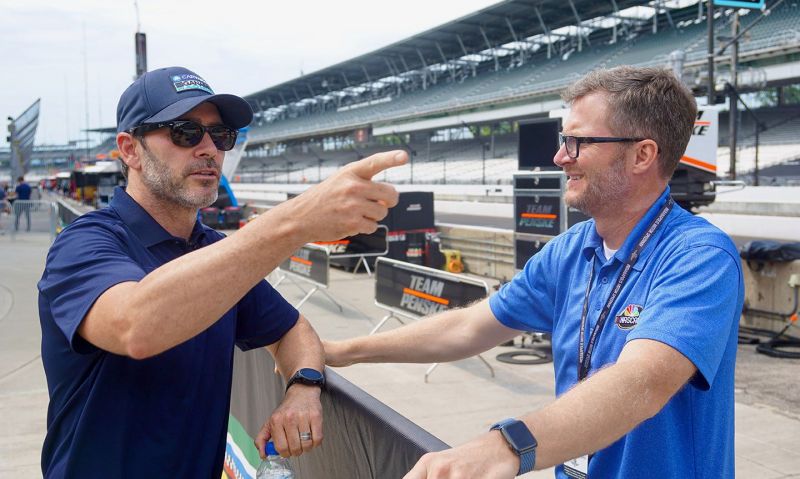 “I think it’s honorable what he is trying to achieve,” Earnhardt told The American Legion in an exclusive interview recently. “It looks harder than hell. He has kept a smile on his face. Most people would have probably folded the tent, or given up, or stomped their foot in frustration.

“He keeps getting up, getting back on the horse, and going again. It’s admirable. Hopefully, it will turn out the way he wants it to.”

They were part of a unique era of NASCAR racing. But when Johnson decided to retire from stock car racing following the 2020 season, it gave him the opportunity to compete in INDYCAR.

Earnhardt moved into the NBC Sports booth as part of the crew that covers NASCAR races in 2018. He remains close friends with Johnson and his family.

Johnson’s INDYCAR rookie season was a tremendous learning experience for the driver who achieved so much success in NASCAR, with seven Cup titles and 83 victories. He spent the first half of the season learning the car and trying to discover his limit of confidence in how far he could push it.

The second half of the season, Johnson showed progressive improvement in each successive race in the No. 48 Carvana/American Legion Honda for Chip Ganassi Racing.

At times, Johnson has struggled, but that only motivates him to improve.

“That’s OK,” Earnhardt said. “He has earned the right to fail at something. If he wants to race this and do this and he is enjoying himself, that is his prerogative. More power to him. You can’t win them all. He has found a tough challenge, and it will be interesting to see how it all plays out.

Earnhardt admires the role Johnson has played as a spokesman for The American Legion, supporting the veteran suicide prevention program. Helping a greater cause is something that is part of Johnson’s character.

“I think that he is an incredible individual with a great heart,” Earnhardt said of Johnson. “I feel like that he puts everything behind everything he gets involved in and dives into it. Nothing surprises me when it comes to his character and class. He was an excellent champion for us in NASCAR. He was never involved in any controversy or anything off track.

“He was a great representative for us in NASCAR. He’ll be the same for INDYCAR and all the charitable initiatives that he is part of, especially with The American Legion.”

Johnson expects continued improvement in his second season as an NTT INDYCAR SERIES driver with Chip Ganassi Racing in 2022. He is giving serious consideration to competing in the 106th Indianapolis 500 on the famed 2.5-mile Indianapolis Motor Speedway oval, in addition to the street and road course races on the schedule.

“He’s not going to give up on making it happen on a road course,” Earnhardt said. “He doesn’t give up easily. I expect to see him continue to push to find the pace and comfort he is looking for on the road courses.

“But I would like to see him run the Indy 500, at least once, just so he can check that box in his career.”

Earnhardt also believes that oval racing in an Indy car may suit Johnson’s racing style. But there would also be dramatic differences between the slower, heavier stock car and the faster, sleeker Indy car.

“You would think so, but these cars are going to be a little different.,” Earnhardt said. “They will have different challenges. The air and the way they react behind each other, they are going to be a lot different. He’ll have plenty of support in coaching and understanding what is coming at him and how the cars will react in traffic.

“Listening to Kurt Busch’s comments when he ran the Indy 500 in 2014, he was surprised by some of the things that he faced that he didn’t face in a stock car in terms of traffic and the way the car handles in traffic. There will be some new things he will deal with that he has to learn. He won’t be able to rely on all of his instincts and stock car knowledge because it will do different things in the wind and turbulent air.