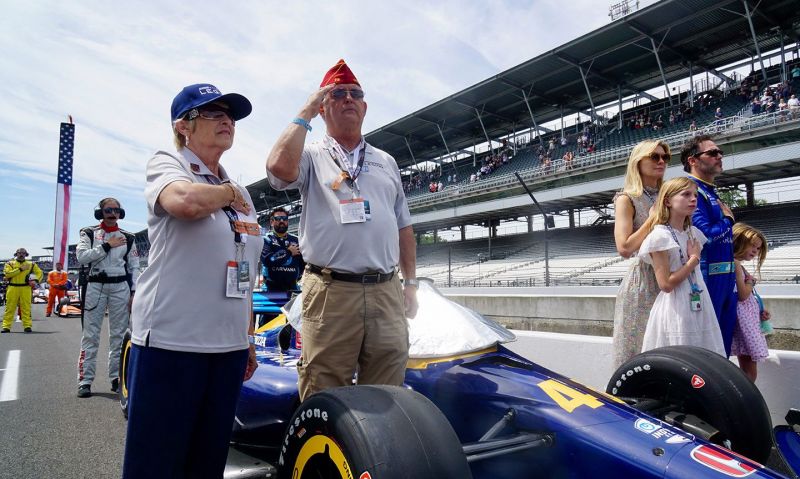 One of Past National Commander James Oxford’s highest compliments includes the term, “Gentleman and a Scholar.”

He believes that phrase is fitting for The American Legion’s association with Chip Ganassi Racing and driver Jimmie Johnson in the NTT INDYCAR SERIES.

“To be associated with class organizations like the Ganassi team and Jimmie Johnson, they are gentlemen and scholars, and we are ecstatic to share this opportunity with them,” Oxford said earlier during the INDYCAR season.

At that time, the native of Lenoir, N.C., was in the final weeks of a unique two-year term as American Legion national commander. That wasn’t the original plan, but with the COVID-19 pandemic canceling many functions in 2020, it became a necessity.

“I was elected national commander in August 2019, and that is typically a one-year term,” Oxford said. “Because we had to cancel the convention last year, I was tasked with staying on an extra year. My term ended at Phoenix in September.

“It was a tremendous honor to lead the organization.”

It was during Oxford’s term as national commander that The American Legion was presented with an interesting and unique marketing relationship with Johnson and INDYCAR. Johnson, a seven-time NASCAR Cup Series champion with Hendrick Motorsports, announced he was retiring from NASCAR competition after the 2020 season.

“I’ve followed Jimmie’s career over his seven championships,” Oxford said. “When Dean proposed this joint association, it took a little bit of looking at, I’ll admit. But it was a good move for us. The things Chip Ganassi brings to the table, the things Jimmie Johnson adds, and his fan base are all things that can help us improve The American Legion brand and its visibility.

“I think we had an extremely successful year and look forward to many more years of this. Dean Kessel is a gem, and we are lucky to have him on our team.”

Key to the arrangement was Johnson and Ganassi helping to create awareness for The American Legion’s campaign to prevent veteran suicide.

“That’s part of what Chip and Jimmie are doing for us,” Oxford said. “They have done a lot of commercials for us. The brand recognition and name recognition create a positive impact on all of those programs as we continue to address veteran suicide.

“I’ve met Jimmie several times over the years, and he is just a gentleman and a scholar and a great representative of The American Legion.”

Oxford and his wife live in the foothills of North Carolina about 75 miles northwest of Charlotte. He began his military service in the Marine Corps in April 1967 and was deployed to Vietnam.

When he returned from Vietnam, Oxford left the Marine Corps and joined the North Carolina Army Guard and Reserves, where he completed nearly 35 years of military service.

“I have held positions in my local posts as post commander, post adjutant, involved with the oratorical contests, been involved with baseball, all of those local post activities, I’ve held those positions.”

During his time as national commander, Oxford maintained his home in North Carolina and often commuted to the National Headquarters in Indianapolis, not far from the famed Indianapolis Motor Speedway.

“The travel schedule is pretty intense when you are the national commander,” Oxford said. “But with The American Legion headquarters in Indianapolis, with the Indianapolis Motor Speedway and the Indianapolis 500, why didn’t we think of this INDYCAR program before? It’s a great fit and all parties are going to benefit from it.

“I think it has been beneficial for all parties involved and would love to see it continue in the future. I’ve heard lots of comments from NASCAR fans talk about this is the first time they have watched INDYCAR racing, and they think it is pretty exciting. That is the positive impact our association is having.

“I was here for the Indianapolis 500 in May, and it was my first race here at Indianapolis, and boy, what a great show.”

Oxford cherishes his time spent as the national commander. He believes he left a positive mark during his tenure.

“Paul Dillard replaced me as national commander. He is a true gentleman and a scholar,” Oxford said. “The civilian society doesn’t realize the service, the sacrifices, the deployments, all the things you are exposed to. But the veteran understands the trials and tribulations. It’s a brotherhood and a fellowship that few can experience unless they join.

“We inherited a great organization, we didn’t mess it up, but I think we made a solid contribution and left the Legion family in a better position. If that is my legacy, my term was successful.”