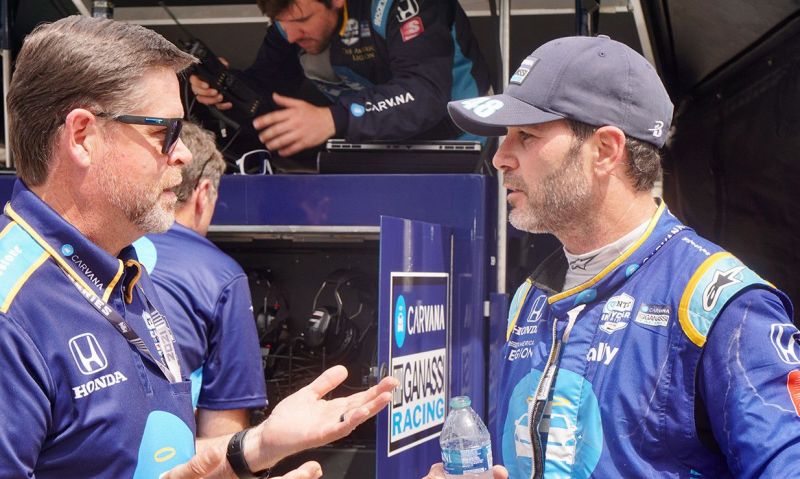 The relationship between a race driver and the engineer is one of the most important on a racing team. The driver has to relate as much information as he feels inside the car to the engineer, who translates that to devise a competitive setup for the race car.

When seven-time NASCAR Cup champion Jimmie Johnson joined the NTT INDYCAR SERIES as a rookie driver at Chip Ganassi Racing in the No. 48 Carvana/American Legion Honda for the 2021 season, engineer Eric Cowdin played a key role in his development to a new form of racing.

Cowdin has been a long-established figure in the INDYCAR paddock, working with fellow CGR driver Tony Kanaan.

In 2021, Johnson drove all the street and road course races on the schedule with Kanaan driving the No. 48 on the ovals, including the 105th running of the Indianapolis 500. Johnson is considering a run in the 106th Indianapolis 500 next May. Johnson has completed the first two phase of the three-phase Rookie Orientation Program (ROP) and will be allowed to finish the final phase with other drivers on track during next April’s Indianapolis 500 Open Test.

Cowdin has been involved with Kanaan’s career beginning in the 1990s in Indy Lights. The two worked with each other in INDYCAR and have achieved tremendous success. Cowdin was Kanaan’s engineer at what was then known as Andretti Green Racing and was a key part of the team’s 2004 INDYCAR championship. Cowdin and Kanaan moved over to KV Racing and were able to win the Indianapolis 500 in 2013.

In 2020, Cowdin joined Dale Coyne Racing for one season where he was the engineer for a talented rookie driver named Alex Palou.

In 2021, Cowdin continued his long relationship with Kanaan, and began a new one as Johnson’s race engineer.

“From where we started in that first race at Barber, our goals were a lot lower then and as you build confidence and he builds experience, those goals keep rising,” Cowdin told The American Legion. “We’re at the point where we are expecting to be on the lead lap and racing for positions.

“That is where we are at. The consistency in the last three races of the season showed that progress over the end of the 2021 season.”

After spending the first half of the season adapting to a different form of racing, often struggling at times, Johnson was able to finish the season on a flourish. Over the final portion of the season, Johnson made significant progress and improvement in each successive race.

In the season-finale at the Acura Grand Prix of Long Beach, Johnson made up 10 positions over the course of the race to finish a season-high 17th.

As he enters his second season in INDYCAR in 2022, Johnson is prepared to move those expectations into top 10 finishes and ultimately contend for victories.

Cowdin has been an engineer for champions, for Indy 500 winners and has worked with the legendary AJ Foyt. Cowdin knew that Johnson’s INDYCAR career would be a dramatic change from the success and glory he achieved in NASCAR and didn’t have grandiose ideas of success.

“I think it was about managing the expectations,” Cowdin said. “Coming into this season, we knew what was in front of us, but it was step-by-step. What’s the next goal we need to achieve? Once we achieved that, we checked that box and moved on to the next thing.

“We started off how to get in and out of the pits. Don’t stall the car. Make sure we can do starts and restarts on track. Those things are all second nature now. We have moved on to the finer nuances of how to get lap time, the in and out laps. Making time on the pit stops. Actual race craft.

“Being close to it and seeing him and how hard he works, it’s not surprising but then you step back and look at it and think, ‘Wow, that’s an impressive thing that he has done.’”

“Being with this team is a fantastic time,” he said. “I’ve been around a while. Going back to the 2000s at Andretti Green Racing when we had Dario Franchitti, Tony Kanaan, Dan Wheldon and Bryan Herta, we had seasons where you win 10 or 15 races a group. You don’t realize you are in the midst of it until it’s behind you. Then you think, ‘Damn, that was pretty special.’

“Those are times you have to remember forever.”