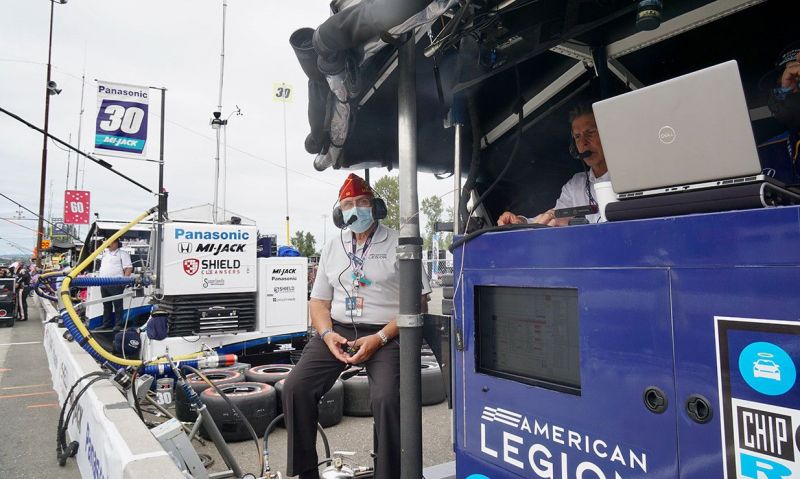 Those are the priorities The American Legion member of Harney County Post 63 in Burns, Ore., believes are most important in The American Legion’s involvement with Chip Ganassi Racing and the No. 48 Honda in the NTT INDYCAR SERIES.

“We have a great relationship with Chip Ganassi and his team. He is very supportive of The American Legion and of veterans.

“We’re looking forward to another year of this relationship and who knows where it will go from there?”

Schmidt’s regime as past national commander was just a few years before the current INDYCAR program was even a thought. But Schmidt sees tremendous value in The American Legion getting involved with a popular sport that features one of the world’s greatest sporting events, the Indianapolis 500, as a vehicle to spread its message.

“Our No. 1 priority is to brand ourselves and get our name out there and to increase membership and let our veterans know we are here,” Schmidt said. “We are 102 years old and have been fighting for veterans ever since. It’s not just about us Legionnaires, it’s about all veterans. We have a pretty good reputation and credibility on Capitol Hill when it comes to speaking up on behalf of all veterans.

“Part of this with the Ganassi team is to approach the serious subject of veteran suicide prevention. That’s a significant topic for The American Legion to work on.”

“I think that is very true,” Schmidt said. “When I was in the military and my brother was in the Legion, he said I needed to join the Legion because someday I would need the Legion. I said, nope, the Air Force is going to take care of me.

“I retired after 27 1/2 years. Once you retire and go out the base gate, it’s another story.

“The young generation today hasn’t thought about it and looked ahead. As you get older, some of the things that may have occurred to you in your military service catches up to you. That’s when you need the VA. We helped start the VA in the late 1920s and early 1930s. We advocate for the VA to keep funded and staffed, but also keep them on track to take care of veterans. That is their job.

“To the younger generation, we have to show them a veteran is a veteran and someday they may need the VA for medical aid, for help in employment or with a home loan.

“But it took me a while to eventually join The American Legion.”

Schmidt hopes to speed up that process by highlighting The American Legion’s INDYCAR program that features seven-time NASCAR Cup Series champion Jimmie Johnson in the No. 48 Honda at Chip Ganassi Racing.

Combine high-speed excitement with an organization that helps fellow veterans, and that could help generate more interest in membership for The American Legion.

“The older you get, the more things you learn,” Schmidt said. “It’s a process of maturity. Looking around, you talk to family members and friends that have gone through certain situations. We learn from other people. That will take time.

“Hopefully, they pay attention to the Indy (No. 48) car, see our name on there, and they can connect.

“We’re associated with a very good team that has got some history. Jimmie Johnson has been around in NASCAR, and he has a pretty big following there. Hopefully, some of that following will continue to follow him in INDYCAR and things will get connected.”

Schmidt and his wife attended the Grand Prix of Portland Sept. 10-12 at the Portland International Raceway. It gave Schmidt a chance to see The American Legion spread its message to race fans in the Northwest.

“It’s awesome,” he said. “We had folks in an (American Legion) booth excited about this. This is something new with our relationship with the Ganassi team. A lot of veterans stopped by our both, and we had literature on the youth programs and numbers for them to call if they have a concern.

“This is a great honor, and we all hope car No. 48 has a great time with The American Legion and on the track. You have to be on your game, on the tip of your toes at the speed they are going to do what they do.

“It’s exciting. The first day we came here on (Sept. 10), you could hear the sound of engines and that gets you revved up.”

The Missouri native who has since made Oregon his home, was a member of the U.S. Air Force from 1965-1993. He served in Vietnam. He has seen an evolution in some of the challenges that combat veterans have experience in their military career. That includes post-traumatic stress disorder (PTSD).

“If the truth would be known, even from World War I, all war is brutal, but World War I was the first major war overseas that America had been involved in,” Schmidt recalled. “That was trench warfare, chemicals, introduction to the machine gun and the tank. Aerial combat. A lot of them call it shell shock.

“In World War II, it was the same definition. But when Vietnam came, the topic was deeply addressed. The American Legion was advocating for help with PTSD, and we still do, trying to find a cure and a remedy for it and treatment.

Schmidt got a chance to spread The American Legion’s message during his term as national commander. It’s a year that Schmidt will forever cherish.

“You are on the road for about 12 months. I visited 55 departments, and some were overseas. You speak to all veterans and it’s a humbling honor.”