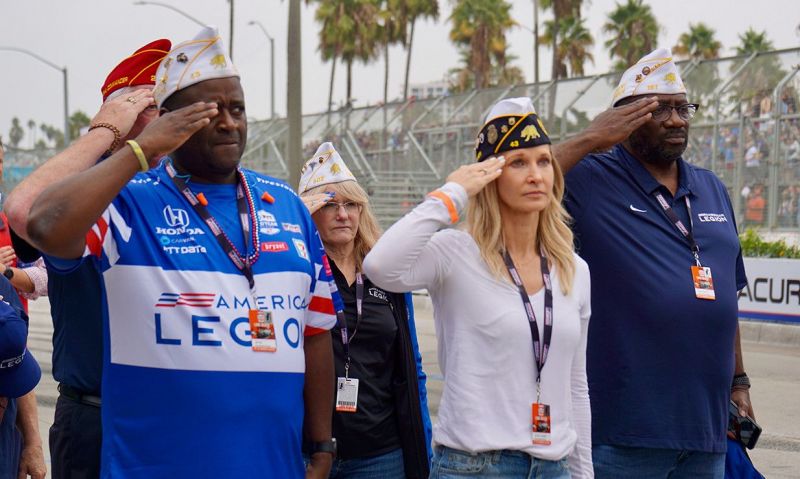 California is perhaps the most diverse state in the United States. With its incredible natural beauty, its massive geographic size and a population that represents nearly every ethnicity in the world, it is truly unique.

Department of California Commander Autrey James oversees the most diverse department in The American Legion, with over 80,000 members and 30 district commanders.

James believes it is important for The American Legion to increase and become more diverse in its membership.

“Diversity is going to help drive the Legion forward,” James said. “We can’t stay one specific group of people. We can’t have one individual belief. We have to understand there are servicemembers coming out that are diverse. Folks that want to join this organization are diverse individuals.

James has a unique understanding of diversity. Originally from the inner-city of Detroit, he joined the U.S. Coast Guard in 1990 and served through 2000. Instead of moving back to Michigan, James stayed in California.

“I’ve been out here in California so long, I may as well be a native,” he quipped.

James is an attorney and works for the Alameda County District Attorney’s office. He is a member of Antioch Post 161, known as the Harding-Noia Post.

His attorney skills have been an asset at The American Legion. “There are a number of legal issues that come up and I can help in the sense when we need to take it outside to outside council to make sure we are doing the right thing,” he said. “Also, negotiation skills. When you have 80,000 members in this state and 30 district commanders that represent our board of directors, it can be very difficult to get people to be on the same page, so you have to help them get to yes on certain issues.”

“I’ve been a member of the Legion for the last 16 years and in recent years, our organization has become more diverse,” James said. “On our committees and commissions, you are seeing more female Legionnaires that are fulfilling roles. We are moving into the leadership positions and getting into the pipeline for the training that is going to put us in different leadership positions.

“I think the organization is moving forward. There will always be some people who say it’s not fast enough and it’s not enough right now, but that’s just the way it is. It takes time.”

James admits he has been an INDYCAR fan for much of his life and always watched the Indianapolis 500 on television, dating all the way back to his days in Detroit.

With The American Legion involved in the NTT INDYCAR SERIES as a major associate sponsor of Chip Ganassi and the No. 48 Honda driven by Jimmie Johnson, James made sure he played at active role in the two races on the schedule in California.

Those include the Firestone Grand Prix of Monterey and the Acura Grand Prix of Long Beach. This year, those two contests were the final two races of the 2021 championship season.

“I always watched the Indy 500 on Memorial Day,” James said. “My son is 31 years old now and he was raised to be a race fan. For me, this is a big deal. An inner-city kid who never thought he would have the chance to do this type of thing. Once I heard The Legion was sponsoring this car and Jimmie Johnson was driving it, I wanted to be at Laguna Seca.”

Increasing membership is one of the primary objectives of The American Legion’s INDYCAR involvement. The other is veteran suicide prevention.

“It’s important because at some point, we all find out there is something that we need as veterans,” James explained. “That need oftentimes can be fulfilled through The American Legion. If you have certain problems that you had that came up during your time in the armed forces. If you are suffering from (PTSD). The ability within this organization for two people to sit down and talk. The camaraderie of this organization also helps.

“There is always something here for people. It’s a matter of making sure they understand it.”

James represented a group of Department of California Legion members at both INDYCAR races that concluded the season.

“Our goal is three-fold,” he explained. “No. 1, we want to get more members because we like to have more members like everybody else. No. 2, we wanted to get donations for our veteran service officer program. The third thing is exposure, to let people know what The American Legion is and what we do.”

Of course, another aspect is fellowship and fun for Legion members.

“That is always important,” James said. “When we are not out serving the community or serving another veteran, we are spending time together either in a Legion hall or a place like this sitting down, relaxing, having a good time and telling some war stories. It’s an important part of getting past the things we may have had in our past.

“That’s very important. That is one of the steps toward preventing suicide – letting someone that feels lost and doesn’t think there are people that know where they are or where they have been and what they are going through, letting them know that there are people who do understand, and we can help them.”

That fellowship, comradery and bond is created by members of The American Legion through their shared experience as veterans. They are able to provide support and understanding because of the unique situations they have all experienced in the military.

“The relationship helps further the mission. That is what is important.”

Because of California’s diversity, that includes some aspects of society that don’t favor the military. Veterans and active servicemembers haven’t always been treated with dignity by some outspoken groups, dating all the way back to the Vietnam era. James has experienced that in his role with The American Legion but has seen that improve over time.

“To be sure, this state is very diverse,” he acknowledged. “I think over the years, veterans have built a better relationship with some of those communities that at one point didn’t necessarily understand the value of having veterans in your community.

“Certainly, there are places in California, even near where I live, where things like ROTC and things like that were frowned upon on the schools.

“We’ve changed that over the last eight or nine years. It’s been the work of Legion posts within communities where people are understanding that we are not just this place to go and have a drink. We are actually working and serving the people in the community.”

At the post level, James has also noticed a change among the members. Many of them have become actively engaged in The American Legion’s involvement with INDYCAR.

“I’ve definitely noticed that, on people’s social media, people talking about it at meetings. ‘How did we do this weekend? How was Jimmie’s run this weekend?’” James said. “It’s been a hot topic all IndyCar season long.”

“I agree,” James said enthusiastically. “The timing of this has been awesome. Jimmie comes out of NASCAR, retires, and joins INDYCAR and wants to run Indy, us being able to build that relationship with Ganassi Racing, the stars aligned.

“I think it’s a great program and a wonderful opportunity for The American Legion. It’s been perfect for us.”