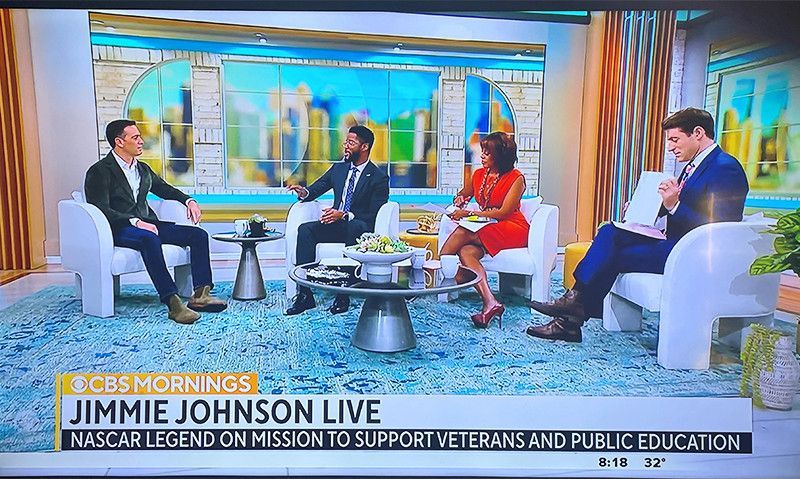 It’s “Giving Tuesday” and Jimmie Johnson is devoting the entire day to help The American Legion and The Jimmie Johnson Foundation meet its goal of raising $248,000 for its charitable causes.

For Johnson, who drives the No. 48 Carvana/American Legion Honda for Chip Ganassi Racing in the NTT INDYCAR SERIES, he is giving his time and effort to the global movement that encourages people to give back to their communities. Last year, more than 34 million people participated.

Johnson’s “Giving Tuesday” began quite early, with appearances on “The Morning Drive” with Pete Pistone and Mike Bagley on the Sirius/XM NASCAR Channel 90 at 7 a.m. Eastern Time.

At 8:15 a.m., Johnson was on the set of CBS Mornings with hosts Gayle King, Tony Dokoupil and Nate Burleson, where he spoke about the importance of “Giving Tuesday” and the challenge he made to the viewers to meet the $248,000 goal.

“Last year, the American Legion had an amazing year on Giving Tuesday and raised $150,000,” Johnson said of CBS Mornings. “We would love to challenge my fans and everyone watching on this very special day to raise more. We would love to incentivize people to go to Legion.org/48 and make a $48 donation. There are so many important services out there, but being with The American Legion over the course of the year and looking at their focus on giving back to the veterans is important.

“Suicide, ironically, is a really, really big problem and one of many causes they are working hard to help the public understand. Every dollar raised will help in their cause and help the people that defend our country.”

The show hosts were curious about why the donations were set at $48, but the answer was quite obvious. “It’s my race car number,” Johnson said.

Giving back to the community has always been a major priority to Johnson and his wife Chandra. “My wife and I have always given back in different ways growing up,” he explained. “We were challenged to start a foundation in my early days starting in NASCAR. The foundation is now 16 years old. There have been many causes we have supported and have paid attention to, most recently public education in the areas where we grew up in California and in North Carolina.”

After retiring from NASCAR following the 2020 season, the seven-time NASCAR Cup Series champion and winner of 83 races made the jump to the NTT INDYCAR SERIES. His major sponsor is Carvana, and The American Legion is the major associate sponsor.

That opened Johnson’s horizons and got him involved with The American Legion. He has been The Legion’s spokesperson in many of its causes, especially its suicide prevention program. That is a major reason for Johnson’s active involvement in “Giving Tuesday.”

“Today is a cool day,” he said on The Morning Drive on Sirius/XM. “It’s really neat that it exists and allows many to be reminded of the great causes out there and the need that exists. It’s very apparent to all of us with the pandemic and the issues that are going on, a lot of people have been hit hard by the pandemic and a lot of needs and great causes prior to that.

Military service and helping veterans are a major cause for Johnson. In fact, it hits close to home for the racing legend.

“Both of my grandfathers served, and my brother-in-law served, so being around the armed forces was special to me,” Johnson said. “To know there is still such a need for these young men and women returning, obviously many needs for our older veterans as well, I’ve had my eyes opened this year to the great work The American Legion does and the huge need that is there for all of the people that defend our freedom.

“I’ve experienced it this year meeting many of the older vets in The American Legion. They thank us for recognizing them. It’s so crazy to me that they are thanking us for the recognition when we owe them a huge debt of gratitude for their service and dedication to our country. They dedicated their lives to defend our freedoms. It’s always amazing to me how humble they are and how thankful they are for the acknowledgement INDYCAR gives them, NASCAR gives them and how they would always honor the men and women that defend our country.”

Although the purpose for Johnson to appear on both CBS Mornings and The Morning Drive was to create awareness for The American Legion and “Giving Tuesday.” But the Chip Ganassi Racing driver did give an update on where things stand regarding a potential run in the 106th Indianapolis 500 in 2022.

“I’m so glad you asked, Gayle,” Johnson quipped to Gayle King at CBS. “I’m working towards it. I’ve been in an Indy car twice now on an oval and was in fact at the Indianapolis Motor Speedway. We hope to get something put together soon, but there are a lot of moving pieces. Unfortunately, nothing to announce just yet.”

“I’m looking really hard at the Indy 500,” he said. “I tested at Texas and drove at the Indianapolis Motor Speedway in one of those cars at 225 miles an hour. That’s quite the experience. That’s very high on my bucket list to accomplish. Hopefully, we’ll be able to make that happen one way or another in the coming years.

“In addition to that is the 24 Hours of Le Mans in terms of cars I want to drive and experiences that I want to have.”

The 106th Indianapolis 500 remains in the future, but “Giving Tuesday” is in the present and Johnson is giving much of his time to help support the cause.

“Take advantage of Giving Tuesday and try to help,” he said.