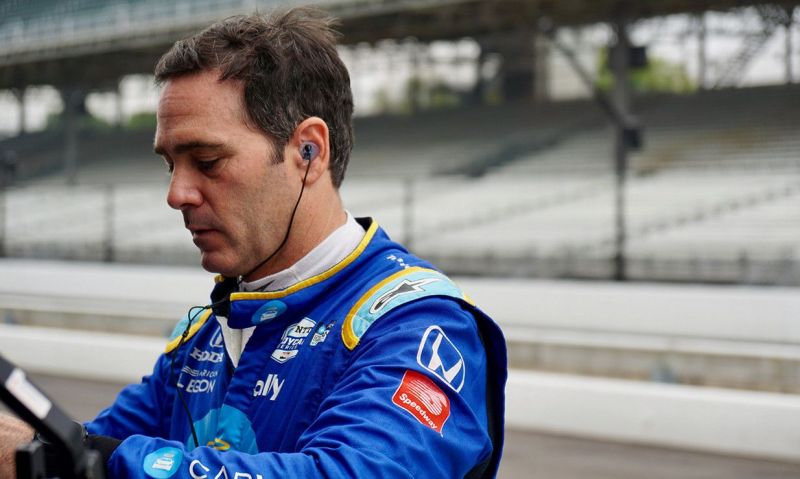 American Legion INDYCAR driver Jimmie Johnson appears closer to finalizing a deal to run the No. 48 Honda in the 106th Indianapolis 500 in May but said there remain some “moving pieces” before he can make that announcement.

“I’m working towards it,” Johnson said on Tuesday’s appearance on CBS Mornings. “I’ve been in an Indy car twice now on an oval and was in fact at the Indianapolis Motor Speedway. We hope to get something put together soon, but there are a lot of moving pieces. Unfortunately, nothing to announce just yet.”

In an earlier appearance on Sirius/XM Radio’s “The Morning Drive” Johnson gave additional information on his status for the Indy 500.

“We hope sooner rather than later,” Johnson said. “It’s getting a little deeper in the year than we would have liked, but there are a lot of moving pieces to sort out. I hope to expand, but don’t have anything to announce right now.

“I’m looking really hard at the Indy 500. I tested at Texas and drove at the Indianapolis Motor Speedway in one of those cars at 225 miles an hour. That’s quite the experience. That’s very high on my bucket list to accomplish. Hopefully, we’ll be able to make that happen one way or another in the coming years. In addition to that is the 24 Hours of Le Mans in terms of cars I want to drive and experiences that I want to have.”

After becoming a NASCAR legend with a record-tying seven Cup Series championships and 83 race victories, Johnson retired from stock car racing following the 2020 season and joined Chip Ganassi Racing’s INDYCAR team. He competed in the street and road course races in the No. 48 Carvana/American Legion Honda and was able to make measurable progress in each race.

He believes he is ready to become more competitive in 2022 and would love a chance to add the biggest oval race in the world – the Indianapolis 500 – to his schedule.

“These cars are incredible,” he said. “They are so fast. They stop and turn and accelerate like nothing I have ever driven before. That part has been a ton of fun. The learning curve has been much steeper than I anticipated and thought as well, but at the end of the season I showed myself and everyone that was watching the big improvement that I made and comfort I was developing in these cars learning a variety of new tracks and surfaces.

“All in all, a really fun and successful first year in the NTT INDYCAR SERIES.”

It was also an incredible year for his former NASCAR Cup Series team, Hendrick Motorsports. Kyle Larson joined the team and was paired with the man who was Johnson’s crew chief at the end of his final NASCAR season, Cliff Daniels in the No. 5 Chevrolet.

With Larson behind the wheel and Daniels in charge of the car and the strategy, they won the 2021 NASCAR Cup Series champion with an incredible 10 victories. That’s the most wins in a NASCAR season since Johnson won 10 races in 2007.

“It’s just an amazing chemistry between those two and what they added to the mix. Hendrick Chevrolet in general has been building up to get back on top of the pile,” Johnson said. “Cliff Daniels is a phenomenal crew chief and such a great leader. A natural born leader. Bringing him on board to finish up that year of Cup with me, I could see his progression and leadership growing.

“Kyle has been in this sport long enough and can win anything and everything he is driving.

“Life is all about timing. I think the timing for where Hendrick Motorsports is. Where the Chevrolets are. Cliff’s journey. Kyle’s journey. The team’s journey. You’ve had this timing that has been amazing to witness, win 10 races and a championship, hats off to all, they have done an amazing job.”

Johnson admits he misses his friends and competitors at Hendrick Motorsports and in NASCAR but is full speed ahead as an INDYCAR driver.

By competing in the top two racing series in North America, Johnson can compare the two series with a unique perspective.

“They are different, and they both have a really special place in motorsport,” Johnson said. “INDYCAR racing and racing on street circuits and the access that fans have, the journey I was able to take Carvana on this year as a sponsor, it’s a little different lane they operate in.

“NASCAR also has its sweet spot as well. It’s hard to pick and hard to say one is better than the other. They are both different and very strong in their own ways. I’ve been very fortunate to experience both and experience both at a high level with arguably the best teams in both industries, so it’s been a really neat experience for me and my family.

“Street circuit racing brings in the casual fan and creates its own energy that each city creates on its own behalf. Then, you add the racing scene and the fans that come with racing. It’s an amazing experience from St. Petersburg, Fla., to Nashville, Tenn., to Long Beach, Calif.”

Johnson turned 46 on Sept. 17 and continues to have a burning desire when it comes to racing. He continues to look for racing challenges and will compete in both INDYCAR and selected IMSA endurance races in 2022. He may even branch out and try a few different races in the future.

“Where I am in life, it’s about these experiences and opportunities,” he said. “I’m really open to any and all. My priority is to get my INDYCAR career under control. Then, the IMSA series and my commitment with Hendrick Motorsports and Ally and trying to get that dialed in. Once those dominoes get in line, if I have any open weekends, then I am open to any and all.

“Our heroes, when I was growing up, the legends were the Mario Andrettis and Parnelli Jones and Dan Gurneys – guys that would race anything, anywhere. Where I’m at right now, that sounds interesting.”