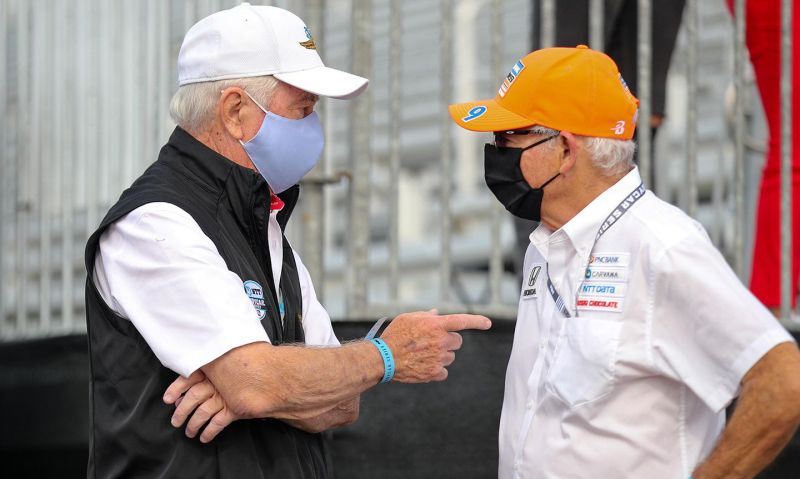 Now that Jimmie Johnson of The American Legion has added oval racing to his arsenal in the NTT INDYCAR SERIES in 2022, Chip Ganassi Racing leadership believes it gives Johnson an opportunity to put his racing prowess on display.

Johnson is a NASCAR Cup Series legend with 83 victory and a record-tying seven Cup championships. Many of those victories came on oval tracks on the stock car racing schedule.

After switching the NTT INDYCAR SERIES as a rookie driver with Chip Ganassi Racing in 2021, Johnson honed his skills on the street and road courses.

In 2022, Johnson will compete in every race on the INDYCAR schedule, including the 106th Indianapolis 500 and the other oval races in the series.

“I think the Jimmie Johnson that we have all grown to experience at Chip Ganassi Racing in and out of the race car is he represents the best side of motor racing,” Chip Ganassi Racing Managing Director Mike Hull told The American Legion. “That is the pure competition, relishing in that and exhibiting that in a positive manner. He will certainly do that on ovals. Some of the feedback he presented to the team when he did Texas and followed up when he tested at Indianapolis, would indicate he understands the terminology, what he wants the car to do, his sensation of the car being very similar to what made his Cup car with Chad Knaus for so long successful and that was the tuning aspect of the car.

“He jumped on that quickly.”

By adding Johnson to the Indianapolis 500 lineup in 2022, another historic racing driver will take on the “World’s Greatest Auto Race.”

“I think the Indy 500 has always been about excellence,” Hull said. “If you look at the Borg-Warner Trophy and the faces on the trophy, there are not too many faces on that trophy that do not deserve to be there. I think Jimmie Johnson represents that as a race driver. That is what the Indy 500 has had since it started, race drivers like Jimmie Johnson that have enormous ability, positive attitude about INDYCAR racing and represents its brand extremely well.

Johnson will remain the key representative for The American Legion in 2022 as he helps promote The Legion’s suicide prevention initiative as well as help encourage new membership from younger veterans. The American Legion will be his primary sponsor in July’s doubleheader weekend at the Iowa Speedway short oval, while The American Legion livery will be displayed on the other CGR cars throughout the season.

“Yes, it will,” Hull confirmed. “We partner with The American Legion and interact with all of our partners at each event.

“What I like about what they do is their message and mission statement. What they are doing for veterans. We push hard for that brand and for The American Legion to be seen across all avenues of what we do and where we race. It will definitely be there.”

Popular driver Tony Kanaan, who drove the No. 48 entry on the oval tracks in 2021, will also return to the team for 2022, according to Hull.

“That is yet to be announced, but Tony is going to race for us, and it will be announced shortly, probably after the first of the New Year,” Hull said.

“I think it’s extremely important,” Hull said. “The divisions of the military, every one of them is a team. The teams are very organized and very disciplined and very, very much like what we do as a race team. The marriage between Chip Ganassi Racing and The American Legion is terrific. I think the veterans see that cohesiveness and teamwork with who we are and jump at the opportunity to be around that.

“We are excited about them because we see in them what we see in ourselves.

“Teamwork is what make the military in America so successful. I think there is a lot of symmetry there.”

By increasing its involvement with INDYCAR in 2022, Hull believes it benefits both the series and The American Legion by cross-promoting and creating awareness to a broader audience.

“The great thing about INDYCAR racing is its broad base,” Hull said. “It appeals to people at all age levels. INDYCAR is on the rise in terms of percentage of increase on people watching the product. The American Legion and the institutional base it has is massive. It is also growing.

“It’s mission in what it is trying to say, it’s great that we are working on getting that statement out. It’s also great that INDYCAR is stepping up to increase that broad base.