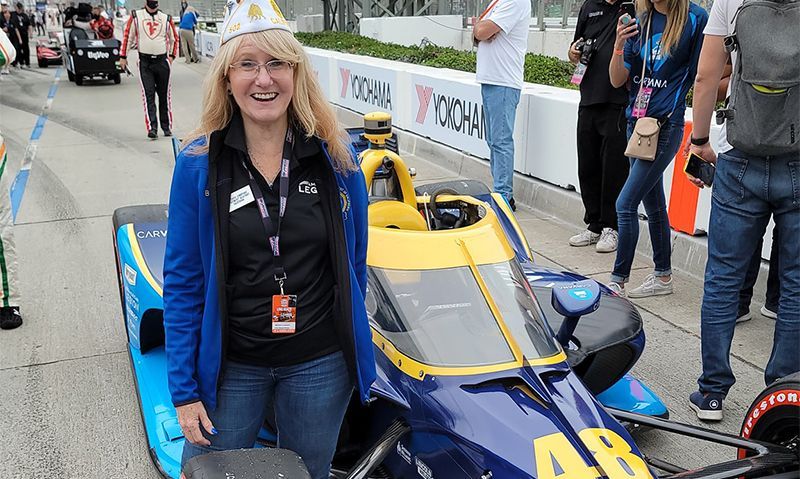 As adjutant for the Department of California, Barbara Lombrano helps veterans throughout the Golden State get connected with American Legion service officers.

To Lombrano – a member of Post 502 in Moore Park – community involvement is one of the most important aspects of The American Legion. That has been one of her main missions since she became department adjutant in January 2021.

According to Lombrano, many veterans are often afraid or hesitant to request all of the benefits they are entitled to because they are under the impression, they will have to hire an attorney.

That is where The American Legion comes in.

“They ask us, ‘What does the Legion charge us to do it?’” Lombrano continued. “We charge them nothing. I was a veteran service officer through the Legion in the Los Angeles area. Our service officers are able to connect them with the resources and help them file their disability claims, or maybe they have already had a service-connected disability and they have never filed for some things or get an increase in their rating or different things like that. And, their family members, too.”

Being a veteran and a member of the Legion is something that gives Lombrano great pride. It’s part of her family heritage.

Her grandfather served in both world wars. He was a “Doughboy” in the Army during World War I and a Seabee in World War II. Both of Lombrano’s parents served in the Navy, where they met and were later married. Every one of her mom’s brothers were involved in the service, including one who was a Green Beret in Vietnam.

Lombrano’s son served in the U.S. Army for six years and is a now a trauma nurse.

Lombrano joined the Navy from 1983, when she started on the USS Jason as the yeoman for the Engineering Department. Some routine dental work put her on a different path when one of the dentists talked her into becoming a dental technician from 1984-1988. She came off active duty at the Coronado Naval Base and entered the reserves.

She was later recalled when the Gulf War began in 1991. Lombrano became a hospital corpsman and went over to the Middle East with the Marines for nine months.

She has 13 years of active duty all together and has taken that experience to The American Legion.

“At that time, what females were allowed to do in the Legion was very limited,” Lombrano said. “It’s come a long way, but in regard to females, it has a long way to go. We need to do better getting more females involved in the Legion. Even for myself, when I was in the military and got out, I didn’t consider myself a veteran. Everyone when they think of a veteran thinks of a male sitting in the bar telling war stories.

“In the Legion itself, we are trying to rebrand ourselves. There is nothing wrong with sitting in the bar having a drink and that comradery, but we are so much more than that. To me, it’s very important for us to be out in the community, for them to see what our missions are. We need to get better at patting ourselves on the back and say this is what we are doing for our citizens and youth, Americanism, all of these different things.”

Lombrano, along with many other members of The American Legion at national offices and the various departments around the world, hope to encourage younger veterans to become members.

“We have to have things that are more family oriented,” Lombrano said. “The younger veterans have families and are working trying to raise their family. They want stuff to do. They don’t want to just come to meetings. We need to have more events that interest them and collaborate with these other service organizations.

“We also have to become more diverse. It’s very important. Just like anything else, diversity is what helps grow membership. Anything in life, the more diverse you are, the better solutions you come up with. We need to be more diverse.”

The State of California is rich in diversity with a strong military history. Lombrano believes there are many veterans within the massive state that could help the Legion grow, simply by becoming members.

“Here in California, we have so many veterans and so many military bases that it astounds a lot of us how many veterans we could be reaching out to that we could get them involved in becoming members,” she said. “I haven’t experienced much negative. Most of the people seem to be very appreciative of veterans and the sacrifices they have made and continue to make on a daily basis.”

Lombrano believes the combination of The American Legion with the NTT INDYCAR SERIES, Chip Ganassi Racing and Jimmie Johnson have given the veteran’s organization a highly visible platform to share its message.

“I’m originally from the south so I grew up watching racing,” Lombrano said. “When this was offered to us at The American Legion, it was really exciting. I like the sport, but more importantly, it gets us out in the face of the community.