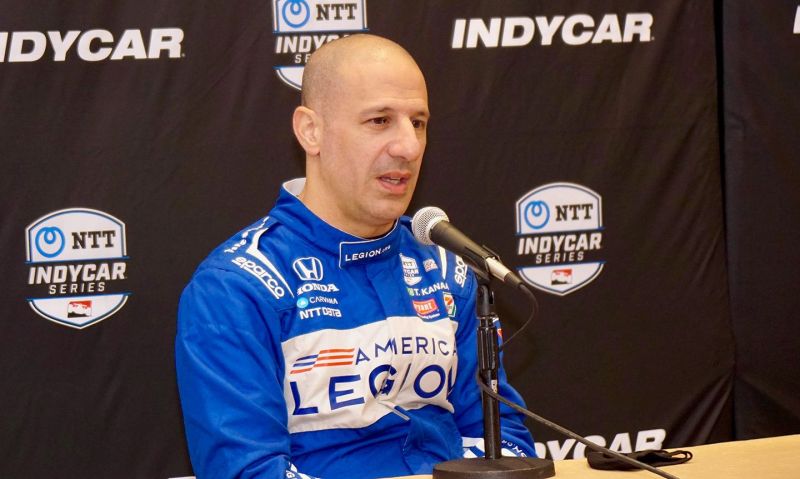 By joining forces with The American Legion and Chip Ganassi Racing, Tony Kanaan’s career has been rejuvenated.

After announcing on Monday that he would be back in an American Legion-sponsored Honda for CGR in the 106th Indianapolis 500 on May 29, Kanaan indicated this may not be his final Indy 500.

He intends to keep his options open for the future.

“Since 2021, we have been associated with The American Legion and what I have learned about the Legion and what they do about the veterans goes way beyond us racing in the 500,” Kanaan said. “It was a really good combination. We had a very strong run and every time you have a strong run like that, you convince yourself you want to do one more. That is what happened.

“We got together with (team owner) Chip Ganassi and The American Legion and decided to come back. The Indianapolis 500 has been my life. We are trying to send a message across the world and help veterans with the mental health and suicide prevention issues.

Kanaan won the Indianapolis 500 in 2013 for KV Racing. Prior to that, he came close to winning the Indy 500 on many occasions, especially during his time at what was then known as Andretti Green Racing and is now Andretti Autosport.

Two years ago, when he was driving for AJ Foyt Racing, it appeared that Kanaan’s run in INDYCAR was about to enter its last lap.

It was 2020 and Kanaan thought his time at the Indianapolis 500 was coming to an end. He announced that year would be his final Indy 500 and he would have a chance to say goodbye to his huge throng of fans at the Indianapolis Motor Speedway and a few other oval races on the schedule in a race car for AJ Foyt Racing.

Two months after making that announcement, however, the world changed dramatically because of the COVID-19 pandemic. With lockdowns and the threat of mass infection, that year’s Indianapolis 500 was not held on Memorial Day Weekend and moved to Aug. 23. In the interest of public safety, it was held without spectators.

“When I did what was supposed to be the last one with no fans, I said, no way. We need to redo this,” Kanaan said. “There is no point to race at the 500 unless there are fans. We did that once in 2020 and hopefully, we will never do that again.

“My love for the Indy 500 came when I was 7 years old, and I was watching the race with my dad in Brazil. The 500 is the race that matters to everybody, and this is the one I want to do. There was no way that I could leave the Indy 500 without having fans there. To have everybody back in the stands, that is how I wanted to say goodbye to the fans, so there was no way I wasn’t coming back after 2020.”

When seven-time NASCAR Cup Series champion Jimmie Johnson retired from NASCAR after the 2020 season, he switched gears to INDYCAR. Johnson’s rookie season was on the street and road courses on the schedule. The team needed a driver for the oval races, including the Indianapolis 500, and Kanaan was the perfect choice.

Kanaan drove for The American Legion in the 105th Indianapolis 500 last year in the No. 48 Honda and the popular driver made many new friends involved in the Legion.

Kanaan’s qualifying speed was the fifth fastest, and he started last year’s race in the middle of Row 2. He went on to finish 10th in the race in a car sponsored by The American Legion.

Kanaan finished 11th in the first race of a doubleheader at Texas Motor Speedway and 15th in Race No. 2 on the 1.5-mile high-banked oval. He closed out the oval season with a 13th-place finish at World Wide Technology Raceway at Gateway.

After showing steady improvement in a completely new form of racing, Johnson has decided to run the full NTT INDYCAR SERIES season in 2022, including the 106th Indianapolis 500. Ganassi had promised Kanaan that he would still compete in the Indy 500 and on Monday morning, that became official.

For the first time in their careers, Kanaan and Johnson will actually get to race against each other.

“It’s awesome. Jimmie and I had a lot of fun. Thanks to Jimmie’s idea, we created this situation two years ago. It’s great to have a seven-time NASCAR champion in the field.”

“There was never a concern because Chip is a man of his word,” Kanaan said. “When we signed a deal, it was a two-year deal. When the rumors that Jimmie was going to run in the Indy 500 and the full season, Chip grabbed me on the side and looked at me in the face and said, ‘I’ve got you.’ That’s all he said.

“With that, I fully understood what was going to happen. We’re running a fifth car and Chip has the facilities and resources to do that and with the IMSA team in the same race shop, we will have a crew to field my car.”

It will be Kanaan’s 21st Indianapolis 500 and it continues to be a great ride.

“The emotions are always going to be high,” Kanaan said. “Being part of the 500 is one thing. Being competitive and having a chance to win is another.

“Chip is a winner. The American Legion wants to win. We have all the means and equipment to do it. It’s going to be up to us to do it.”

Kanaan was already the most popular driver at the Indianapolis Motor Speedway, but his throng of fans have grown dramatically because of The American Legion.

“I thought race drivers were very brave and take risks,” Kanaan said. “Meeting the Legion, we’re brave, but they are the real heroes. I have a whole different appreciation for what those veterans did for us and fought for us. It made me even prouder to wear their colors.

“Hopefully, we take them to Victory Lane.”