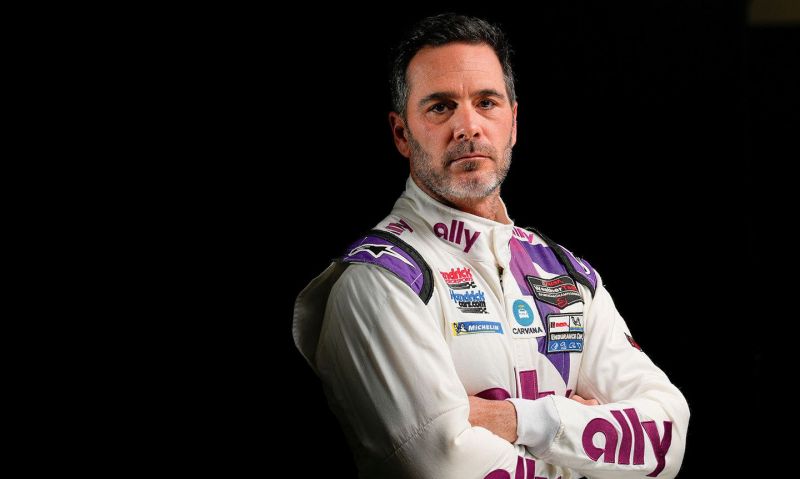 American Legion driver Jimmie Johnson may be on a short leave from his Chip Ganassi Racing INDYCAR team, but he will be one of the main contenders this weekend in the Rolex 24 at Daytona IMSA Sports Car race.

Johnson is making his ninth appearance in the famed sports car endurance race and returns to action with Action Express Racing in the No. 48 Ally Cadillac.

He is part of a four-driver team that includes Kamui Kobayashi of Japan, Mike Rockenfeller of Germany, and Jose Maria Lopez of Argentina that will start third in the IMSA WeatherTech SportsCar Championship’s 60th running of the Rolex 24 at Daytona.

“I’m really excited,” Johnson told The American Legion last week. “I don't have a lot of reps in high-performance –  high-downforce cars I should say, not high-performance. The IMSA car is not identical but braking and some of the techniques that go with the IMSA car are the same things you do in the INDYCAR, so it's just more reps for me, and I have an amazing team with Action Express, three incredible teammates.

“We finished second last year, and I hope to finally stand on that top box for that race.”

The No. 48 Cadillac finished second in last year’s twice around the clock race. This year, the team will try to put the Ally entry in victory lane. To do that, it will start third on the DPi grid and will have to navigate a 61-car field to make it to the finish. Johnson and Kobayashi helped the foursome take the first step in that endeavor by scoring a third-place finish in last weekend’s 100-minute qualifying race.

Johnson is a seven-time NASCAR Champion who begins his second season in the NTT INDYCAR SERIES with Carvana, The American Legion and Chip Ganassi Racing.

“I am excited to be back,” Johnson said. “We were able to get our commitment done early so we really have everything in place to do well. We know we will be running the four endurance races, so we were able to put together a strong team. We have a strong driver lineup, great support from Ally and the guys at Action Express Racing. My own journey – I am much more competitive this year than last. So, I am looking forward to helping the team. It is about executing well and dialing the car and team in perfectly. I think our team is stronger this year than last and we finished second in 2021.”

Kobayashi, the two-time defending World Endurance Co-Champion along with WEC teammates Lopez and Mike Conway, hopes to earn his third Rolex 24 title (2019 and 2020). But Kobayashi says that navigating traffic and keeping the car in one piece will be key.

“Traffic will be key,” Kobayashi said. “Keeping the car in one piece is one of the most important things. I think everyone in this field is a professional driver. So, we don’t need to take a lot of risk, just try to manage it (the risk). At the end of the day, the team that has the best car has the best chance to win the 24-hour. But still, anything can happen in 24 hours. We’ll see what happens.”

Rockenfeller looks to capture his second Rolex 24 win. He was part of the Action Express Racing team that won it in 2010. Rocky knows what it takes to win this race and knows just how tough the competition is.

“The Roar was good for us as a team,” Rockenfeller said. “The drivers got some good seat time, which is important because we won’t get much more time in the car for race week. Jimmie and Kamui did a great job to come in third in the 100-minute race. We saw the strengths and weaknesses of the Ally Cadillac, so we can improve for the race. I am looking forward to getting some stints in the car and fight for the victory. It is going to be tough. The competition is strong.”

Lopez will make his first start in the No. 48 Ally Cadillac this weekend.

“The Roar went OK,” Lopez said. “We worked hard and made a lot of improvements through the practice sessions. We had a good run in the qualifying race. Jimmie and Kamui did a great job. They had a strong run in the qualifying race finishing third in the Ally Cadillac, which gives everyone confidence. Now we will keep working. The weather is supposed to be very cold. That will always be a challenge to keep the tires up to operating temperature. We will have to set-up the car for consistency for the whole race.”

Johnson will return to duty with The American Legion after this race as Chip Ganassi Racing continues to prepare for the 2022 NTT INDYCAR SERIES season. The 2022 campaign begins with the Firestone Grand Prix of St. Petersburg on the streets of St. Pete on Feb. 27. Johnson will be competing in the entire 17-race schedule including his first appearance in the 106th Indianapolis 500 on May 29.