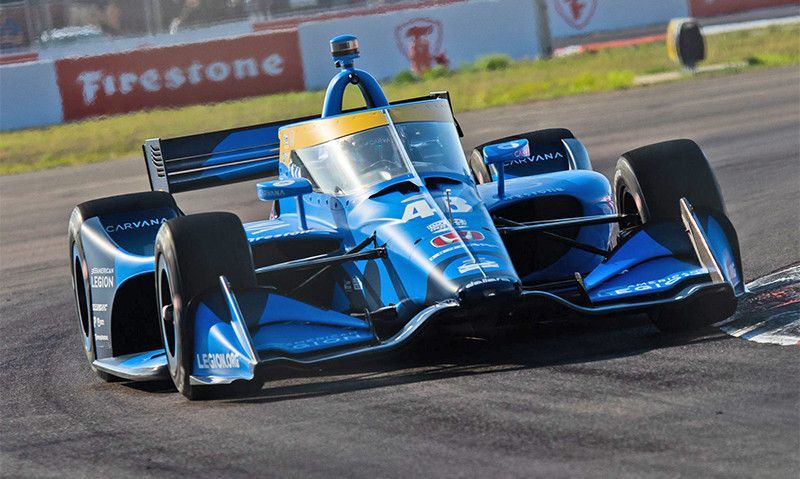 He was eager to show that his second season in the NTT INDYCAR SERIES would be more successful than his first. But there was the challenge that the 1.8-mile, 14-turn temporary street course that runs along the shoreline of Tampa Bay onto the city streets of St. Pete may be Johnson’s most challenging circuit in INDYCAR.

“It’s not so easy to hit the re-set button like it is on the simulator,” Johnson’s engineer Eric Cowden said. “Here, with concrete on each side, you don’t get a lot of laps in practice. That is where some of the veterans that have been coming here for 20 years and some of the new guys that are young, and brave, excel.”

Between three rounds of practice, Johnson spun his No. 48 Carvana/American Legion Honda at least four times leading into the race. One of those spins hampered his ability to qualify in Saturday’s Firestone “Fast Six.” The Chip Ganassi Racing driver started 26th in the 26-car field and was determined to show that he was ready to race in 2022.

For the most part, Johnson was significantly faster than when he competed in this race as a rookie in 2021. He even exceled on the faster, softer Firestone Red Tires early in his run, racing his way to 12th place on the grid.

But once the Firestone Reds lost their grip, Johnson had to hang on until it was time to make his scheduled pit stop and get on the harder compound, more durable Firestone Blacks.

“They chunked pretty bad,” Johnson said. “You do your best to hang onto it, but when the guys come out on Blacks and you get a taste of reality how much grip there really is, you realize the deficit you are at.

“It was a handful on the Reds once they lost grip.”

After making that pit stop, Johnson was all the back to 23rd place. That’s where he finished the race, one lap off the lead lap, completing 99 of the 100 laps in the contest.

At one point late in the race, the drivers fighting for the race victory closed on Johnson’s No. 48 machine, including Chip Ganassi Racing teammate Alex Palou. Although there was concern from Team Penske driver and ultimate race winner Scott McLaughlin that Johnson might hold him up to allow Palou to catch up to the race leader, Johnson was able to let the faster cars pass.

“After that, I got behind them.”

INDYCAR racing is a complex sport where the results don’t always equal the effort. That is how Johnson and his crew accepted Sunday’s effort.

“It was good, actually,” said Johnson’s new race strategist, longtime Chip Ganassi Racing crew chief Blair Julian of New Zealand, who was Scott Dixon’s crew chief for all six of his NTT INDYCAR SERIES championships. “We tried getting the most out of it and went long on the set of Reds there. If we had a couple things go our way, we would have been up there with Takuma Sato.

“We dropped off the pace after getting some buildup on the Red tires and he got freight-trained a little bit. It was a good, clean day from where we were 12 months ago. It’s a big improvement. We have a bunch of new guys on the team and I’m obviously new, and it was a clean day. It’s all good.”

The difference between this year and last year at this time is the seven-time NASCAR Cup Series champion was just learning how to race in INDYCAR in 2021 to getting racy in 2022.

“We got pretty racy at Long Beach at the end of last year and his confidence is building,” Julian said.

Johnson has meshed quickly to working with Julian.

“He’s a rock star; he does a great job,” Johnson said. “He did a great job keeping a step ahead because he has spent so much time on the outward side of this wall, we were a step ahead.”

Johnson also had another voice in his ear on the team radio Sunday. It was 2004 NTT INDYCAR SERIES champion and 2013 Indianapolis 500 winning driver Tony Kanaan, who will drive The American Legion entry in the 106th Indianapolis 500 on May 29.

“TK is another perspective with a lot of experience, and him and engineer Eric Cowden’s experience and relationship is really strong,” Julian said. “I really like this new role calling race strategy. It’s all pretty new and a little anxiety at the moment, but we’ll get used to it and try to keep improving every week.

Cowden was Johnson’s engineer in 2021 after a long and successful career serving as Kanaan’s engineer throughout his INDYCAR career.

“Going into this weekend, we don’t have the benefit of the extra rookie tires,” Cowden said. “You have to go out and play with the big boys on their schedule now. We don’t get as many laps as we would like to. We had a couple Red Flags this weekend and we have to improve that. We had a few mistakes here and there and clean that up.

“But I just told him, where we were a year ago, he was actually out there racing. We got ourselves in a strategy on the tires where it could have gone either way for us. Where he is now compared to where he was a year ago, it’s night and day difference.

“His race pace was very consistent, and he hit a fuel number when we needed him to hit it. Him, as a racer, is always going to shine through because that is what he is at the core. Giving him more experience now and laps is what we have to push through from our end.”

Johnson admitted he had high hopes entering the race, but his result was a function of qualifying. “I have to qualify better,” he said. “I ran with Takuma Sato at the beginning of the race, and he finished P10. Then, we had to get off race strategy and we stayed on the Reds too long and I lost track position.

“I know the scoreboard said one thing, but from what I felt in the car and what the team saw on the timing stand, that, by far, was my most competitive race. So, good things to come.”