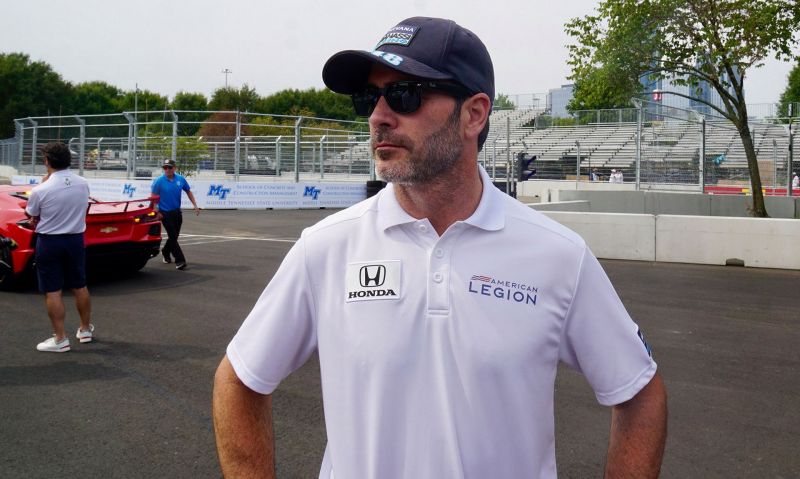 Jimmie Johnson of The American Legion INDYCAR program will compete in an Indy car on an oval track for the first time in his career in the March 20 XPEL 375 at Texas Motor Speedway.

It’s a chance for the 46-year-old Johnson to display what he did best as a seven-time NASCAR Cup Series champion. That’s racing toward the front on an oval, and it comes at one of his most successful tracks from his NASCAR career.

Johnson won a NASCAR-record seven races at Texas Motor Speedway in a career that began in 2002 and ended at the end of the 2021 season. His track-record seven wins rank fourth among his career victories at a single track (Dover-11, Martinsville-9, Charlotte-8) and no other Cup driver has won more than four at Texas.

Although Johnson’s No 48 Carvana/American Legion Honda at Chip Ganassi Racing is a much different racing machine than the famed No. 48 Chevrolet he drove at Hendrick Motorsports, Johnson is hopeful he can translate his oval racing expertise to the Indy car.

“There is a rhythm to an oval and maintaining your minimum speed, how to set up a gap and close a gap using the draft so there’s race craft that I think will be useful,” Johnson said. “But the worlds are pretty far apart, further apart than I anticipated.

“My test here in August, I felt more comfortable on the second set of tires than I have period in INDYCAR on a road or street course.”

Johnson and Chip Ganassi Racing were among the drivers and teams that hoped to test at TMS last Monday.

The test session was postponed because of cold weather as the temperature never surpassed 39 degrees. INDYCAR and Firestone Racing officials have a formula where the ambient temperature and the track temperature must hit 100 degrees when added together. The equation wasn’t close enough for the high-speed Indy cars to safely take the 1.5-mile, high-banked oval.

“It was really surprising to me that there were some similarities because on a road course there are none between NASCAR and INDYCAR vehicles,” Johnson continued. “Granted, the pace is much quicker around here than a Cup car, tools are different, car is different, but I did find that some of the basic changes to a car cross over from NASCAR and the way you generate lap time, the way you carry momentum, the way you set up the passes, a lot of that is much more in my wheelhouse.

Johnson showed significant progress during his 12-race, NTT INDYCAR SERIES “rookie season” in 2021. In his 13 starts last season, his best finish was 17th and those came in the final two races of the season (Laguna Seca, Long Beach).

He opened this season Feb. 27 with a 23rd place finish at the Firestone Grand Prix of St. Petersburg, Fla.

Street and road course racing were not Johnson’s forte in NASCAR. Just one of his 83 career wins came on that type of racing course.

“I think realistically on street and road courses I’m trying to battle for the middle of the pack,” Johnson said. “I don’t think it would be realistic to say I’m going to be able to race for a win. I think on the ovals that shifts further forward. I don’t have a really good sense of how far forward, but in my heart of hearts I hope I can get in top-five territory, if not better.”

Johnson is hopeful the addition of oval tracks on his schedule, especially Texas Motor Speedway and the Indianapolis Motor Speedway, will help him make a dramatic improvement in performance.

“When I look back through my career, I’ve been here before and I know there is a pattern to my learning, there’s pattern to adapting to the cars and tracks, so I’m not as nervous about it,” Johnson said. “I know there’s a natural process and I just have to give it time. And I know myself and it’s really energized me, and I love the time and effort I’m putting in to try and cover as much ground as fast as I can. It’s been a familiar process but also a fun one and one I’m really enjoying.”

While the track is the same, the parallels of running a 3,200-pound stock car around the layout versus a nearly 1,700-pound, open-wheeler are drastically different.

“I think anyone seeing the transition he made, this would be the most natural switch for him,” said teammate Scott Dixon, who owns a TMS-record five INDYCAR wins. “Granted, it’s still very much at the other ends of the spectrum and I think for him it will be an eye opener. Obviously, testing here and running laps by yourself is very different than running in traffic. … so, it’s still a steep learning curve for him, but I feel like he feels much more natural, for sure.”

Johnson’s teammates at Chip Ganassi Racing all believe he will be a bigger factor this weekend because he already understands the art and skill of racing on an oval.

“I think we are all excited to see him on the ovals this year because at least I feel like even though he has driven other cars he has so much experience on the ovals from all of his years in NASCAR,” teammate Marcus Ericsson said. “I really feel like he can add something for us as a program on the ovals. I think he is just going to make us even stronger. I think he will be very strong on the ovals and surprise some people.”

Reigning NTT INDYCAR SERIES champion Alex Palou can’t wait to compete on an oval track against a driver that was one of the best-ever NASCAR racers on an oval.

“I’m looking forward to sharing a day on the oval with him,” Palou said. “I have not had the opportunity yet – it will be an amazing opportunity.”

Practice for the XPEL 375 is Saturday morning March 19 from 10:45 to noon Eastern Time. Qualifications are scheduled for 2:30 p.m. Eastern Saturday with final practice from 5-6 p.m.

INDYCAR races are a great time to participate in The American Legion’s Buddy Check program. Call a fellow Legion member and head to the local American Legion post to watch the race on TV.