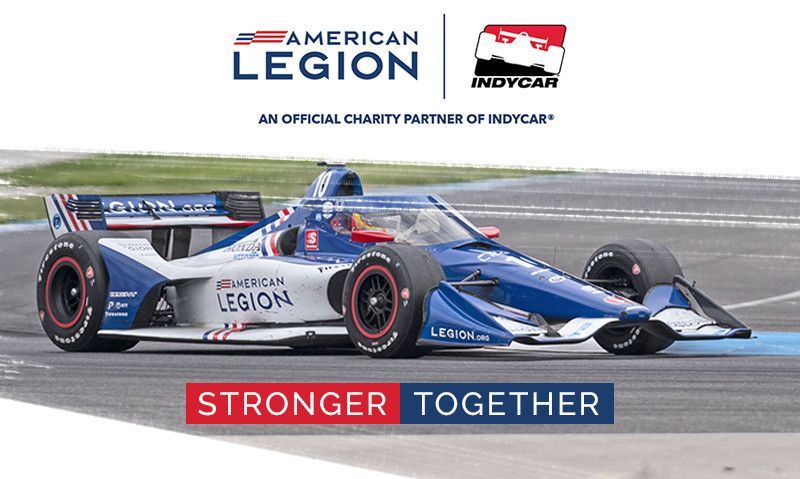 The multi-year agreement gives The American Legion a chance to use additional marketing assets during an INDYCAR weekend including a new activation area for fans. The Legion will also be able to broaden its footprint in the paddock by using additional INDYCAR drivers to help spread the message of support for the organization that benefits members who have served in the United States military.

“The American Legion performs an incredibly vital role for our veterans, for whose service and sacrifice we’re eternally grateful,” said Mark Miles, president and CEO of Penske Entertainment Corp., which owns INDYCAR and the NTT INDYCAR SERIES. “This partnership will help to accelerate the Legion’s goals through various promotions, and we hope Legionnaires everywhere will join our team and follow our exciting series with its bold, hyper-competitive drivers and precise teamwork.”

This partnership increases The American Legion’s involvement with the series that started in 2021 with Chip Ganassi Racing.

“Partnering with INDYCAR is a no-brainer for The American Legion,” said American Legion Chief Marketing Officer Dean Kessel. “For 103 years, Indianapolis has been the host city of our national headquarters. It is also the home of ‘The Greatest Spectacle in Racing.’

“Pairing these two legendary institutions makes sense on so many levels. This partnership enables us to tell the story of how American Legion posts strengthen communities across the country. Race fans are patriotic. Like Legionnaires, they believe in supporting veterans and their families. The bottom line is that this partnership makes both The American Legion and INDYCAR even stronger.”

The American Legion is a major associate sponsor on the No. 48 Carvana/American Legion Honda driven by legend Jimmie Johnson in the full 2022 NTT INDYCAR SERIES season and will be the primary sponsor of fan favorite Tony Kanaan’s Honda in the 106th Indianapolis 500 presented by Gainbridge on Sunday, May 29. The Legion also will rotate sponsorship with some of the other drivers on the championship winning Ganassi team.

“Ganassi drivers – particularly Jimmie, Tony and Alex (Palou) – will continue to be the centerpiece of our activation efforts at track and in media,” Kessel said. “However, I think it’s incredibly valuable to have different voices involved and speaks to our desire to be part of the fabric of INDYCAR. This gives us access to drivers and teams across the entire paddock.”

INDYCAR and The American Legion will collaborate to promote a variety of Legion programs, including raising awareness of the growing problem of veteran suicide. Programs at the track will include patriotic displays, flag raising and lowering ceremonies, giveaways, and public address announcements, while both groups will cross-promote on social media and through constituent communications and advertising.

“Last year, we successfully increased awareness of our mission among race fans nationally,” Kessel said. “Now we have to go a level deeper. We have to build relationships with race fans locally and ask for their support of our efforts to help veterans.

“Our local members will have access to assets in every race market. We might bring a driver to a post one night and that will enable them to do a fundraiser or even a membership drive. Another example – at each race, we will be rewarding a lucky member or donor with a trip to Victory Lane, which is an experience you can’t really get anywhere else. It is fun for the race fan, but it also helps us increase membership and donations. These are just a couple of ways you will see this partnership come to life. There will be much more, especially in the month of May and at the Indianapolis 500.”

The 2022 NTT INDYCAR SERIES season continues Sunday, March 20, for the XPEL 375 at Texas Motor Speedway. Coverage begins at 12:30 p.m. (ET) on NBC and simulstreamed on Peacock Premium. Coverage is also available from the INDYCAR Radio Network with audio available via the INDYCAR App powered by NTT DATA.

The American Legion is the largest veterans service organization with nearly 2 million members and more than 12,000 posts across the nation and regions overseas. The American Legion, established by an act of Congress in 1919, was instrumental in getting the original GI Bill through Congress and the creation of the Department of Veterans Affairs. Today, the organization supports military personnel and veterans and their families in local communities, and supports youth through programs such as American Legion Baseball, Boys State, Oratorical, Junior Shooting Sports and other activities, and continues to push for the adoption of government policies supporting the needs of veterans. For more information, visit legion.org.

For more information on INDYCAR and the NTT INDYCAR SERIES, please visit www.indycar.com.