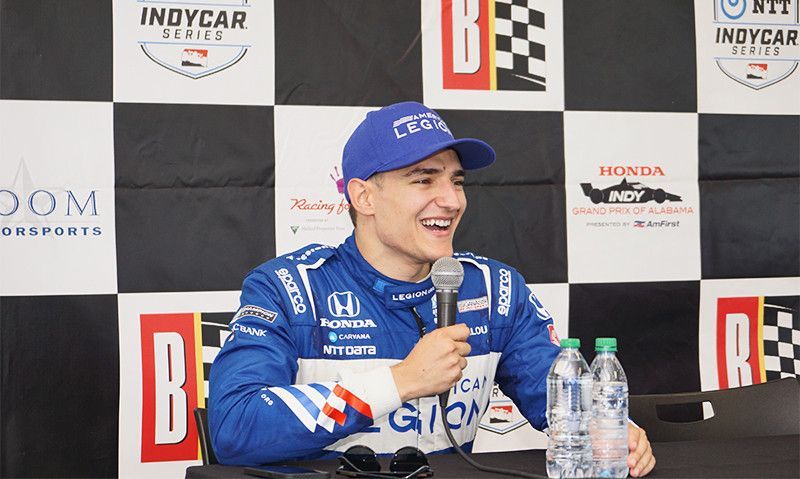 Palou leads second-place Scott McLaughlin of Team Penske by three points heading into the “Month of May” at the Indianapolis Motor Speedway, the biggest month of the year for anyone in INDYCAR racing.

“It’s amazing. We couldn’t have started the relationship better last year, but also this year it’s the first year we are running the No. 10 American Legion car, we met a lot of special people today and during the weekend,” Palou said. “It was good to give them a good result to start the year. I cannot wait to run it again.

“It looks amazing on track, it’s fast and we’ve been lucky with it.”

Jimmie Johnson, who carries The American Legion colors as the major associate sponsor on the No. 48 Carvana Honda at Chip Ganassi Racing, started last in the 26-car field and finished 24th, one lap down to the leaders.

“It’s Barber,” Johnson said. “Thankfully, the sun came out and the track dried out and we were able to race on a dry racetrack. I didn’t want my first experience in the wet in an Indy car to be a time raced.

“I had a solid race going but, on the restart, I got hit from behind in Turn 9, spun around, and it went green the rest of the race. I ran by myself, ran a lot of laps, learned a lot today. My personal growth took a solid step today. Unfortunately, I don’t have a result to show for it.”

This is the first of three races that Palou will have The American Legion as the sponsor of his No. 10 Honda. That also includes the May 14 GMR Grand Prix at the Indianapolis Motor Speedway road course and the July 30 Gallagher Grand Prix at IMS.

American Legion National Vice Commander Angel Narvaez of Post 129 of Carolina, Puerto Rico, was the Legion’s guest for this race and got a chance to speak to Palou before the race and greet him on the podium afterwards. Palou appreciated the fact that he could have a conversation with Narvaez in Spanish.

“I didn’t know he was from Puerto Rico, and I started talking in English and he was talking in Spanish, and I thought, ‘Oh, that’s cool.’ It was easier for me,” Palou said. “It was a cool conversation we had. We talked about everything, and I met him on the podium in Victory Lane.

“It was his first INDYCAR race and I’m sure he will be back. This is a proud thing to be part of. I cannot wait for the rest of the month of May at Indianapolis.”

On the track, Palou gave the Legion reason for pride with an outstanding race where he made a daring move on his final pit stop to thread the needle between race-leader and eventual winner O’Ward and take second place away from Rinus VeeKay.

“I went two laps longer on my fuel and tires, so I knew I could push more in and out of the pits,” Palou explained. “I didn't really had to save that much fuel as him. I said, ‘Okay, we'll have a chance, have plenty of overtake to use.’ I felt really comfortable with the car and started pushing. Pato was making the same lap time. I said, ‘Oh, no, that's going to be tough.

“I pushed ‘til the end. Caught him on some laps, lost a little bit of time on some others. He was really good. It's maybe a track where even if you're a little bit faster, you cannot really pass. It's so hard. As soon as I would get, I don't know, a second close to him, I would just lose my front and drop 3/10ths max. I was doing that all race at the end. But it was fun. I was trying to push him and try and make him to do a mistake or try to make him to push too much, have to save fuel. But Pato did a good job.”

Sunday’s podium included the 25-year-old Palou, 21-year-old VeeKay and 22-year-old O’Ward. In INDYCAR, youth was not just on display, it was showcased.

“We're not really taking over. If you have Scott Dixon as your teammate, you would really think that's not true,” Palou said. “I think it's a good podium, obviously. It's always good fighting with each other. I think we know a lot how we race each other. I think we already shared like couple of podiums together. It's really cool. Hopefully, we can continue doing the same.”

It also gives Palou even more confidence heading into the Indianapolis Motor Speedway for the greatest month of the year in INDYCAR.

“I was already really happy with the start of the season we had,” Palou said. “Obviously another podium, another race where we were pushing it at the end, and almost got it. It gives us some momentum, some confidence, some happy time.

“It's going to be good. It's going to be really busy from next week on, so it's good to have, like, couple of good results to get there. Also looking forward because we had strong results in the road course before, and also at the 500 last year. I can't wait.”