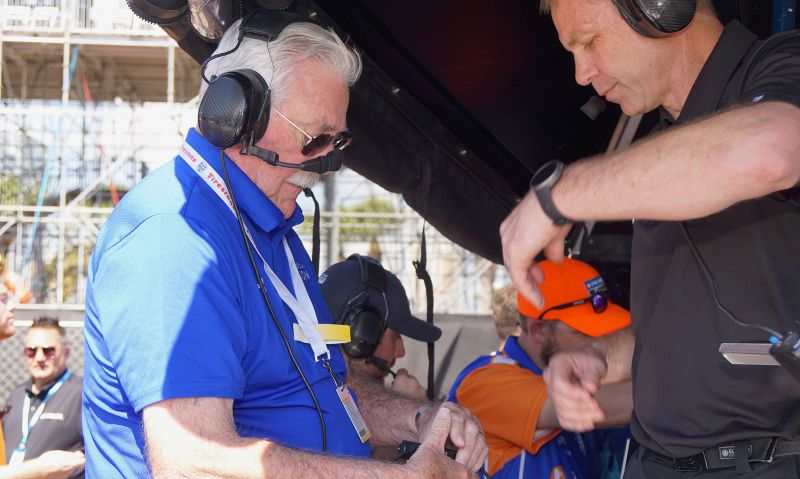 Florida National Executive Committeeman Dennis Boland (left) was able to attend the Firestone Grand Prix of St. Petersburg in February, listening in on one of the team’s headsets. (Bruce Martin photo)

As an active member of The American Legion, Dennis Boland of Post 322 in Lehigh Acres, Fla., got his first experience at the Indianapolis 500 in 1989.

“I became a district commander in Florida and was part of “Race to the Top” and won a free trip to the Indianapolis 500,” Boland recalled. “At first, I thought, ‘No big thing.’ But when they fired up those engines, I got involved.”

That was back in 1989 when Emerson Fittipaldi won a thriller against Al Unser, Jr. in the closing laps of that year’s 500-Mile Race. He returned the following year to witness Arie Luyendyk win the first of his two Indy 500s.

Boland is a Florida past department commander from 1991 to 1992. Currently, he is the department’s National Executive Committeeman.

Boland served with the 101st Airborne from 1962 to 1965. He was never deployed to Vietnam because he suffered a serious injury on his 39th jump. He left the service in March 1965 and his brigade landed in Vietnam on July 29.

“I lucked out,” said Boland, who did not join the Legion until well after he had left active service.

“Myself and my wife, we are veterans and neither one of us joined when we got out of the military,” Boland recalled. “Twenty years later, I finally joined The American Legion and I’ve been very involved the past 40 years.

“The pressure of raising a family, you don’t have the extra time to participate in an organization. By belonging to The American Legion, it gives us membership so when we go to Congress it is a very prime factor of how we get resolutions passed for our priorities of veterans.

“When I finally joined and went to Post 130 in LaBelle, Fla., it was run by World War II veterans, and they brought me into their fold. Without them, our post would not have been able to grow. They liked my ideas, and I was one of the younger veterans. I think it gets us veterans who are now the older veterans to listen to the younger veterans and help us grow. The American Legion has nowhere to go but grow.”

Boland and his wife, Dianne Boland, were guests of The American Legion at the Firestone Grand Prix of St. Petersburg on February 26-27.

They met with Jimmie Johnson, driver of the No. 48 Carvana/American Legion Honda at Chip Ganassi Racing. They were also able to meet many of the crewmembers, stand on the grid with the team before the race and watch the racing from the team’s timing stand on pit road. They were also connected to the team’s headset radio for that race to listen in on race strategist Blair Julian and Johnson during the course of the race.

“You look him in the eye, and he looks you in the eye and you can tell this is a real man. This is what he cares about. He loves the sport, and he loves bringing the sport to The American Legion.”

Johnson is the primary spokesman for The American Legion’s INDYCAR campaign and will be carrying the Legion’s colors exclusively in one of the two races of the Iowa doubleheader in July.

Tony Kanaan will be fully sponsored by The American Legion in the 106th Indianapolis 500 in May. Alex Palou drove the Legion livery in last week’s Honda Indy Grand Prix of Alabama to a second-place finish at Barber Motorsports Park. He will also have the Legion on his No. 10 Honda in the May 14 GMR Grand Prix at the Indianapolis Motor Speedway and the July 30 Gallagher Grand Prix at IMS on July 30.

“I was part of the National Executive Committee when this program started, and I thought it was a good deal,” Boland said. “Some members thought we should spend the money on advertising, but I told them since we started this Indy 48 car, we have had over $7 million in television advertising to bring in our younger veterans, plus the corporate sponsors that are lining up to help donate money to our causes. It was an easy sell when I got back. It was a win/win for The American Legion.”

Boland also commends Dean Kessel, the Chief Marketing Officer for The American Legion, for helping to create new avenues of awareness that will in turn drive additional membership to the Legion.

“We went through 100 years, and you always have to be innovative,” Boland said. “Bringing Dean Kessel in is one of the big plusses for The American Legion, and the direction he has taken our marketing.

“In the last few years, we didn’t see growth, but this year I have. We have more members renewing and signing up than we have in the previous years. I believe we will grow further and further.”

As an official charity of INDYCAR, The American Legion is getting its message out, especially the “Be the One” campaign that is addressed at reducing veteran suicide by just one at a time. Over time, that will reduce the 17 veterans who commit suicide every day.

“I could tell you the story of a young lady that had 14 years in the Marine Corps and couldn’t handle it anymore and wanted to commit suicide,” Boland recalled. “She got out of the military and called her mother up. Her mother told her to stay there, she drove nine hours and picked her up and brought her back to Arkansas. Her mother said ‘there are three things you are going to do when you are in my house. I don’t care if you sleep all day, drink all day. I will take care of you. I will pay all of your bills. The third thing is there is an American Legion hall three blocks from here and you will go to that American Legion hall.

“When went there she found out about Boys State and Girls State and our oratorical program. She lives in Florida right now and credits The American Legion for saving her life.

The Legion also has other programs that can help struggling veterans get some help when they need it the most.

“What The Legion has to do is give younger veterans what they need,” Boland said. “They are into computers and taking care of their children. We take care of their kids.

“We have temporary financial assistance. If they fall on hard times, we’ll give them $1,500. It’s a grant, so they don’t have to pay it back to help them pay for food, clothing, doctor bills and whatever.”

The American Legion’s involvement with INDYCAR has helped show many veterans a path to the Legion, that can include fellowship, assistance and a common bond with others who gave their service to the U.S. military.