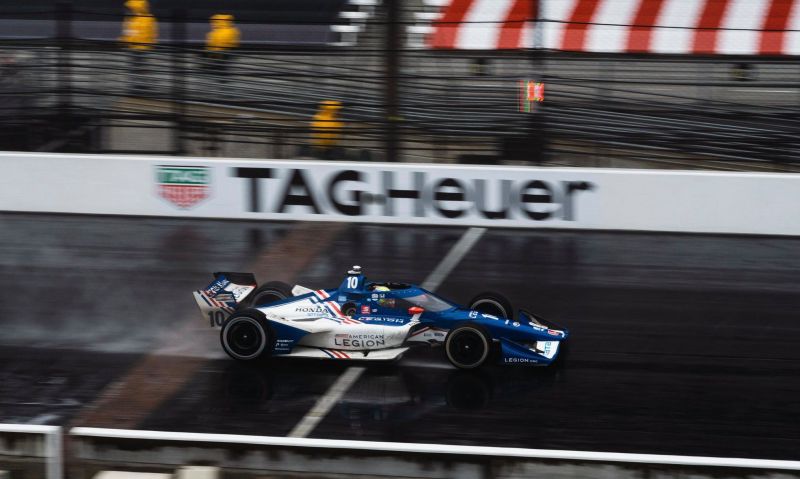 Instead, the two-hour timed race was a real washout for both.

The dynamic of the race changed dramatically because of severe weather that swept through Central Indiana on Saturday. Because of the rain, IndyCar officials ruled it a “rain race.” That meant every car in the race had to start the contest on rain tires and it would be a timed race at two hours instead of running the scheduled 85 laps.

Palou, who was driving the No. 10 American Legion Honda for Chip Ganassi Racing for the season race in a row, started on the outside of the front row next to pole winner Will Power of Team Penske.

The rain tires, however, did not suit Palou’s race setup. He lost two positions on the first lap.

As the racing surface began to dry, teams made the gamble to go back to the racing “slicks” – the treadles tires are that used on a dry race track.

But on Lap 6, Kyle Kirkwood of AJ Foyt Racing and Palou both made contact in the infield portion of the race course with Palou getting stuck in the grass.

Palou was able to get his car back onto the racing surface before it stalled, bringing out the first full-course yellow flag of the race.

By the time Palou’s Honda was towed back to the pit area and repaired, he had dropped back to 27th, last in the field.

His Chip Ganassi Racing team decided to top him off with fuel, in hopes that the strategy would play in their favor later in the race.

It never did and in a race that was run in dry condition, but ended up in the rain, Palou finished 18th and lost the lead in the NTT INDYCAR SERIES standings.

Team Penske’s Will Power, who finished third in Saturday’s race behind race-winner Colton Herta and second-place Simon Pagenaud, is the new leader in the championship battle heading into next week’s qualifications for the 106th Indianapolis 500.

As for Johnson, the centerpiece driver for The American Legion in the NTT INDYCAR SERIES, he started 27th and finished 22nd.

“I just finished my first rain race,” Johnson said back in the Chip Ganassi Racing garage in Gasoline Alley after the contest. “It was probably the most difficult thing I’ve ever been a part of, especially at the end when it was really raining hard. I couldn’t see anything, anywhere. But I was able to bring the car home. Unfortunately, I had a few spins and one of them stalled the car and brought out a caution.

“I lost a few spots as a result, but all in all the car is in one piece. I’m thankful to have finished the race. I got some good experience in the wet and how to understand things like when to be on dry tires and when to be on wets.

“All in all, a great learning experience, and I’m glad it’s behind us.”

Although race day was a bitter disappointment for Palou, he proved in Friday’s qualifications that when it comes to sheer speed under dry racing conditions, Palou is one of the best in the series.

The driver from Spain was fast in all of the practices and was on pole until the very last few seconds when Power was able to knock him off at the very end.

“It was a great day for us,” The American Legion driver said on Friday. “I was really fast all day, all practices. We tried to improve the car for qualifying and we did. We found some stuff, which I was really happy about, and we got through Fast Six. That's the main target to start up front.

“And then when you are with used Firestone Reds and you have only one lap it's tough to make it happen, right? Yeah, it was a good day for us.”

On each one of Palou’s fast laps in the three-rounds of qualifications, he was pushing the No. 10 American Legion Honda to the limit. He proved that a loose race car is a fast race car.

“Yeah, that was what I said to the engineers as well, but they didn't believe me,” Palou quipped. “It's a track where the corners, how they are laid out, all the cars tend to obviously steer a little bit on entry if you look at it.

“We were basically trying to make the car be more comfortable and easier to push with it. At the end I was super happy during qualifying with my car both on blacks and reds. It's a track that you always have to fight so much.”

“I mean, it's Will Power,” Palou said. “He probably has more poles than I have races in single seater.

“No, it's not a surprise. I wanted to get pole, but to be honest, I knew we were really good. We had really good speed, but we always lack a little bit on use reds maybe because I don't have enough experience also on getting 100 percent from them, which Will had.

“I wanted to get the pole, but I was not super shocked.”

Palou, Johnson, and the rest of the Chip Ganassi Racing team get Sunday and Monday off before returning to the Indianapolis Motor Speedway for Tuesday’s opening round of practice for the 106th Indianapolis 500.

The American Legion team will grow by one more driver that day as 2013 Indianapolis 500 winner and 2004 INDYCAR SERIES champion Tony Kanaan rejoins the team in the No. 1 American Legion Honda, which promotes the “Be the One” campaign to help end veteran suicide.