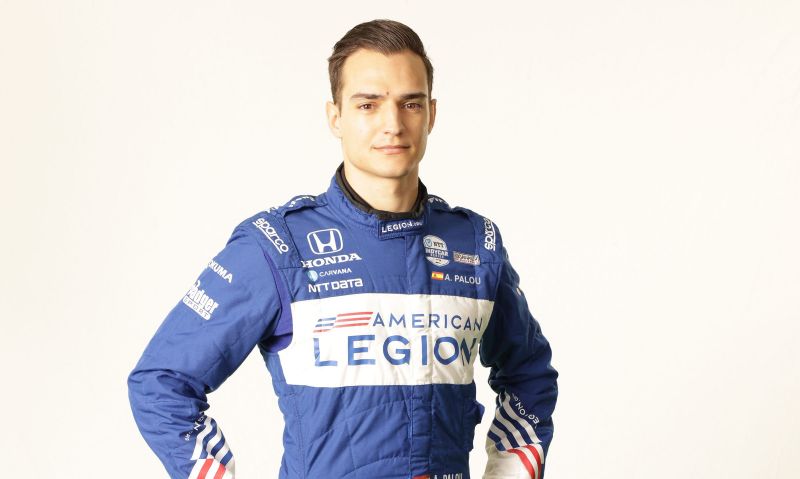 This is the second year that Alex Palou, Jimmie Johnson and Tony Kanaan are representing The American Legion during the INDYCAR race season. The drivers are doing more for The American Legion this racing season than just wearing the gear and steering the sponsored cars.

They are playing pivotal roles in educating the public about The American Legion’s Be The One initiative to reduce the numbers of veteran suicides. Additionally, they are participating in the Legion’s third annual 100 Miles for Hope fitness and wellness challenge.

Prior to the season, each driver gave exclusive interviews to The American Legion. Here are excerpts from the Q&A with Palou, a native of Spain, edited for brevity and clarity. (In Johnson’s Q&A, he talks about his grandfathers’ military service, his fitness program and more.)

Question: You are on a visa working on your path to U.S. citizenship. Entering your second year representing The American Legion, how has it inspired you to be driving for and cheered on by veterans who dedicated their life to serving America?

“It means a  lot to be cheered on by members. I got to meet a lot of veterans before the race last year. I could see them cheering me. It was awesome. It helps me to go faster knowing there is somebody caring for me. It’s motivating. I look forward to doing even better this year for The American Legion.”

Palou: Ever since I was a kid, I wanted to live here in America and experience the culture. The anthem is so special because of what it means. On the racing side, it’s a time where everyone wants to be focused. Everybody takes two minutes to listen to it and be part of the ceremony. I really enjoy it. I love it.

Question: Generations of veterans have returned from war to face challenges related to transitioning back to civilian life. Sadly, roughly 20 veterans a day take their own lives. Tell me about what it means to you to be supporting The American Legion's commitment to reducing the rate of veteran suicide.

Palou: I can help contribute to help people who are struggling. It (the suicide rate) is too much. It doesn’t improve like that (snaps fingers) but with The American Legion’s help, it can improve bit by bit. With the work we are doing with The American Legion, it will make a difference. Hopefully, next year at this time the numbers will be down and we can be proud of it.

Question: How do you motivate yourself to do a workout when your mind is telling you to blow it off? And why is fitness so important for your sport?

Palou: Fitness is the number one thing I do every day. At 7 in the morning, I do my routine with my trainer and then do the other stuff I need to do. That’s how we can still be at the highest level. For people who are not athletes it is still super important to keep the mind frame and get away from the problems you have from the pressure at work or studying.

His routine includes a combination of about 90 minutes a day of lifting weights, running and doing CrossFit. He points out drivers are often in the car for 2-2 ½ hours.

People may think we are breathing normally. But we are breathing hard like we are running and lifting weights sometimes. Cardio is super important but having strength keeps us alive at the end of the race.

Palou: If you look at 100 miles, it’s a lot. But if you break it to small targets you can reach every day, it’s not that much. I encourage my family, my grandfathers, to go for a walk. It’s really good for your overall health and mentally too. Just break it down, do 15 minutes today, 30 minutes tomorrow. It doesn’t take much.