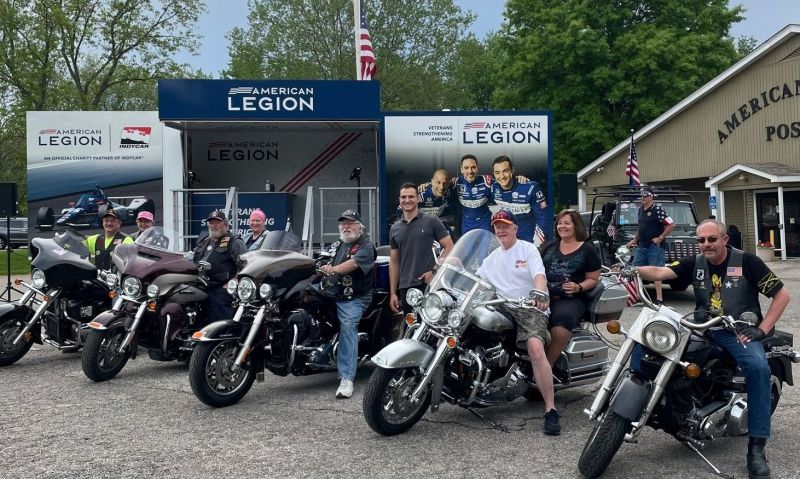 He may be from Spain but defending NTT INDYCAR SERIES champion Alex Palou of Chip Ganassi Racing has developed a deep appreciation and respect for The American Legion.

Palou’s No. 10 Honda is sponsored by The American Legion for three races in 2022 including the May 1 Honda Indy Grand Prix of Alabama at Barber Motorsports Park, the May 14 GMR Grand Prix at the Indianapolis Motor Speedway road course and the Gallagher Grand Prix on the IMS road course on July 30.

This past Sunday, Palou made a visit to American Legion Post 79 in Zionsville, Ind. It’s located about 10 miles from the Indianapolis Motor Speedway and with a rare Sunday off, Palou and The American Legion activation trailer made an appearance at the post where the INDYCAR star had a meet and greet with Legion members.

“I think they knew I was coming, but I didn’t know they were bringing the activation trailer to the post, so that was cool,” Palou said. “Zionsville is 15 minutes from my house. I went there, took some pictures, and met everybody at the post. I thought it was super cool to meet so many members there.

“They had a really good atmosphere there.”

Palou has met many Legion members at NTT INDYCAR SERIES races, but this was the first time he got a chance to meet Legion members on their home turf.

“It was my first time having that access at an American Legion post,” he said. “I thought the way they were having lunch was so special. They have a lot of areas to have fun and serve a lot of people. It was amazing.

“I didn’t know I was invited to lunch. If they had told me before I had lunch, I would have eaten there. It looked like they had really good food. It was fun.”

Palou is one of the 33 drivers participating in practice for the 106th Indianapolis 500 this week. He is back in the NTT DATA No. 10 Honda. Tony Kanaan, the 2013 Indy 500 winner, is driving the No. 1 American Legion “Be the One” Honda for Chip Ganassi Racing and Indy 500 rookie Jimmie Johnson is in the No. 48 Carvana/American Legion Honda.