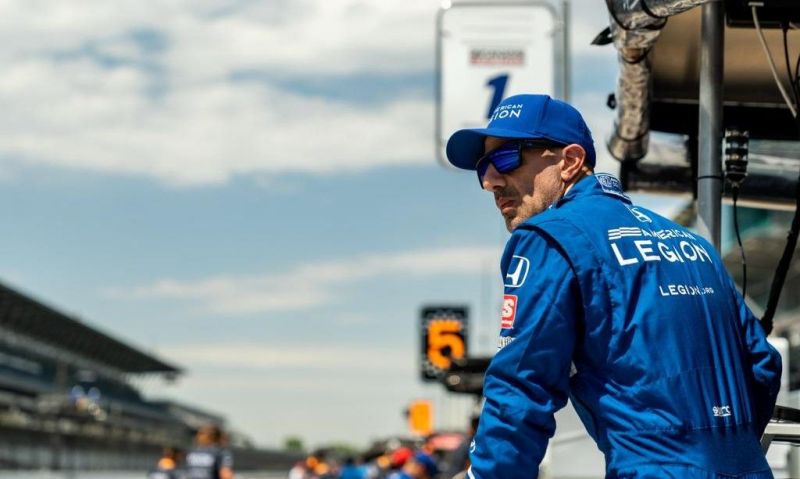 It’s “Fast Friday” at the Indianapolis Motor Speedway (IMS) and that means it’s time to turn up the boost for The American Legion team at Chip Ganassi Racing.

Each engine that hits the track Friday and through qualification weekend will get an increase in turbocharger boost that means extra horsepower, and extra speed, in the Honda engines.

Tony Kanaan is driving the No. 1 American Legion Honda for Chip Ganassi Racing and summed up the team’s game plan after he finished 29th in Thursday’s practice session with the regular boost setting.

“We’re not worried about lap time,” Kanaan said. “We really worked on the race car and are pretty comfortable. Now, it’s Fast Friday and we start worrying about qualifying.”

Kanaan ran a fast lap at 223.601 miles per hour as his crew work preparing the Honda for it race setup.

The other member of The American Legion team, seven-time NASCAR Cup Series champion Jimmie Johnson, has been impressive on the IMS oval. The four-time Brickyard 400 winner in NASCAR is an Indy 500 rookie and he was the fifth fastest Thursday at 226.409 mph in the No. 48 Carvana/American Legion Honda.

That gave him reason for confidence heading into Fast Friday.

“The first lesson that I was reminded of is just because you had a good setup on Tuesday doesn't mean you're going to have a good setup on Thursday,” Johnson explained. “This track, in a Cup car and certainly I'm learning in an Indy car, it's very temperamental, and you've just got to be on top of it. You can't put your guard down. Things change, and I'm trying to understand why there was a difference, because obviously race day when you go to race, you don't get a practice session beforehand to see where your balance is.

“But all in all, Thursday was a great day. A lot of lessons learned, a lot of laps in the car, a lot of running in the pack, so just a successful day.”

Fast Friday includes six hours of high-speed running as the teams prepare for the revamped qualification process Saturday and Sunday.

Another four of four-lap qualification runs will determine the pole winner and the starting order for the first two rows of the 106th Indianapolis 500 on May 29.

“For me this reminds me a lot of the Daytona 500 down Speedweeks to start the year,” Johnson said. “We're down there for a couple of weeks. Granted, we had a race the first weekend, but there still is this buildup to a competition which is kind of parallel or similar to building up to qualifying.

“Thankfully I had 19 seasons of that to prep me for this.”

Every lap Johnson runs at the famed 2.5-mile Indianapolis Motor Speedway provides the legendary driver with that much more experience as he prepares for his first Indianapolis 500.

“Every lap is just a great learning opportunity for me,” Johnson said. “Today we ran two full tire runs or ran it out of fuel just to let me feel what it was like to go from start to finish. Just logging those laps and being in the draft, some guys will come out on new tires, some guys will run old tires. Just getting a feel for all of it.

“I feel like today I kind of broke through to a new level of comfort in race trim. I still have no clue what it's going to feel like to go 230 miles an hour or something around here when the boost goes up, but I'll get into that tomorrow.

“But from a race standpoint, I think I covered a lot of territory today, and I'll put that on the back shelf until we get to Monday and have a chance to get into this mindset again, and tomorrow is a really a new day starting with (qualification) sims.

“That’s my first thought, but then quickly behind that on more of a sarcastic note, it's less time to confuse ourselves. It just depends on how the weekend plays out.”

Johnson has spent a majority of his time working on race setup, but his No. 48 crew has been successful in keeping him in the top five in the previous two practice sessions so far this week.

The driver is also learning the differences in how the car handles by itself and in traffic.

“I think it's a culmination of finding the balance when you're in clean air versus in traffic,” Johnson said. “There's a pretty big difference in how the car handles and behaves.

“Managing that and just understanding how uncomfortable I can be by myself, to then be more comfortable in traffic or the other way around. Those are the things I'm personally working through and trying to understand on top of working out the timing that it takes to set up a pass and get the proper run off of Turns 2 or 4.

“For me, Chip has just been really adamant about knowing where the right rear tire is. In a Cup car I feel like the advantage I had for so many years is I was willing to drive the car really loose, and it really benefitted the style of racing and the way the fuel burns off of those cars and protect the right front tire.

“Here you certainly need to have the car turning well, but you cannot slide it around like you do a Cup car. The advice Chip has given me, and Dario Franchitti keeps hammering me on, is just know where that right rear is.”

Fast Friday will be the first time that Johnson makes a qualification “simulation” on one of his runs and trying to time that with traffic and other cars on the track to get a clean run could be a challenge.

“I just have no idea what to expect,” he said. “I feel like my experience in working the draft, understanding how to time a draft and a run and to post a fast lap time is one thing, but I don't know what to expect for qualifying.”